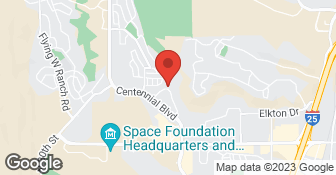 We are licensed and insured in El Paso, Teller, Douglas, and Park Counties. We have National Fireplace Inststute (NFI) certifications in Gas, Wood, and Pellet, including a Master Technician....

It went amazing. The crew arrived 15 minutes early. Identified themselves, then started working on the fireplaces. As each fireplace needed a replacement part they explained to me what it was and why it needed to be replaced. I was extremely impressed with knowledge and professionalism the workmen.

I’ll let you know when the work is started/finished. It would be nice to be asked after the work is done and not be bothered in between!

Description of Work
Work to be done - service has fireplaces.

Technician was prompt, professional, and spent a long time making sure our glass was as clean as possible. Glass was cloudy and etched.

The sweeps who came were FILTHY! They did not wear shoe covers, or use enough tarps to protect the carpet near the hearths. One of the vacuums spewed dust as they vacuumed out the fireplace. They left sooty foot prints all over. It took several tries to vacuum it all up, and I'm still seeing spots! We did order chimney caps and had them installed on a second visit. I was assured they would not have to come inside for this visit. They did not install the caps correctly. They didn't bother to tighten the screws into the chimney piece, and did not warn us that the caps may come off in wind. I was assured by the installer that the caps were on the chimney securely. We had the big winds come through, and sure enough the caps flew off and damaged our roof. Ours were the ONLY caps that came off in that wind in our neighborhood, which tells me that the installers did not do the job correctly. Fireplace Doctor and their insurance company refuse to repair the damage. I can show that the screws were loose and not tightened to the caps, but neither the Fireplace Doctor nor Nationwide, which insures them will acknowledge responsibility. I would like to escalate this, because they should be liable for shoddy work. The response I got from the Fireplace Doctor was to contact my insurance company and have them pay. Excuse me, but I should not have to lay out the deductible and have my insurance company pay for repairs when it the responsibility lays with Fireplace Doctor. I asked if they could at least come out and look and her replay was, "Oh no, it's our busy time of year. I can't schedule anyone to come." DO NOT TRUST THEM to install chimney parts correctly! Oh, yes, They were an hour late for the cleaning, but no one bothered to call us to let us know. I had to call them.

Description of Work
They came twice. Once for chimney cleaning of two chimneys. Once to install chimney caps.

We originally went to the customer's house to sweep her flue, service a log set and measure for chimney flue caps. This review is the first time our office has heard anything about the lack of cleanliness during this sweep. Normally our technicians offer to take their shoes off when going into someone's home. We will be speaking to our technicians about this matter. It is interesting to note that the customer apparently gave us an "A" review for the original appointment. We installed the caps on the house a couple weeks later. These caps were installed as we always do on a clay flue. The technician screwed them on as tightly as he could without causing damage or cracking the clay flue. Once the cap was on the technician pulled on it with as much force as he could to make sure that it was secure. This procedure was confirmed with our owner who has over 20 years of experience in this field. Our owner said that when putting a cap on a clay flue you do not want to force the screws into it or drill holes because you run the risk of damaging the flue beyond repair and that the procedure that we use is acceptable for normal weather conditions. The screws on the cap seem loose when not installed. They are tight only when installed. The wind the customer speaks of was not ordinary wind. It was hurricane force winds ranging upwards of 80 MPH on January 9, 2017. Close to the area of this house nine semi-trucks were knocked over on the interstate. The state closed many miles of the interstate for several hours until the wind calmed down because of this. According to news reports this wind storm caused millions of dollars of damage around town and was responsible for the death of one person. The worst damage was in the area where this customer lives. It is also good to note that we went to a home located within a mile of this customer the week after the wind storm and they had two of the exact same type of chimney caps. In their case one cap stayed on and one cap blew off which is in accordance with what the customer says in her review, there were some caps that did stay on. We did not tell the customer that we were too busy to go out when she called about her roof damage after the wind storm. On the contrary it was clear that there was nothing that WE could do to remedy this situation and there was no reason for us to visit her home to see the damage-it was a matter for our insurance company to handle. We did suggest that she contact her homeowner's insurance based on the severe weather conditions, but we willingly contacted our insurance because the customer felt we were responsible for the damages. We contacted our liability insurance immediately since she felt that her house was damaged due to improper installation of the chimney caps. Our liability insurance determined that the damage resulted from an act of nature and not from improper installation of the caps.
5.0

The sweeps did an excellent job getting the fireplaces cleaned and explaining the issue with our gas log. We opted to cap off the gas line for now, so they didn't do the repair, yet, but we will call them when we're ready to get it working again. My only negative critique is that the sweeps did not use shoe covers and one of their vacuums left dust. Not a lot, but we had just had the carpets cleaned, so I am especially sensitive to the dust.

Description of Work
We had two chimneys cleaned and inspected. One had a gas log that was malfunctioning, the other was wood burning. They also measured for chimney caps, not included in the price.

Emil worked with me to help choose the perfect replacement unit. His installation was flawless and the fireplace is exactly what I needed.!

It went very well. The technician was very polite and knew what he was doing.

Good work, professional and very helpful. I would use them again. They can be hard to nail down during the busy season, but that is to be expected, I suppose.

Description of Work
They replaced a control module and then cleaned, tested adjusted both of my gas fireplaces.

Emil was very helpful with fixing the problem we had with our new wood stove. The wind had blown off the outside vent cap soon (4 weeks) after installation. As I live on the eastern plains, we can get some high winds. Emil's team found the cause and, with manufacturer input, applied the fix to more securely mount the vent cap. Thanks Emil!

Sir, I am very sorry that you are dissatisfied with the services we have provided you. We take customer service very seriously, which is why we are more than willing to come to your house next week as discussed to re-attach the cap for you at no charge. As our technician told you, the cap was attached per the manufactures instructions, and most likely blew off due to the unusually high winds that your area experienced recently. When we come to re-attach the cap, we will take extra precautions to ensure this does not happen again. If we can be of any further assistance, or if you are unhappy with the product in any other way, please do not hesitate to call
5.0

They were excellent. They were clean and they were neat. They were professional. They addressed those problems, figured it out and got it fixed. It was expensive.

Description of Work
The unit was built in '91 and it wasn't working so they had to kind of refurbish it with a new thermocoupler, an igniter and something else.

RoofCorp is a locally owned company specializing in residential roofing. If you have a worn out roof, or if your home has hail or wind damage, we can help! We've installed thousands of roofs throughout the Denver area. We also repair and replace siding as well as completing general contractor jobs. Your 100% satisfaction is our goal!  …

Insured
All statements concerning insurance, licenses, and bonds are informational only, and are self-reported. Since insurance, licenses and bonds can expire and can be cancelled, homeowners should always check such information for themselves.To find more licensing information for your state, visit our Find Licensing Requirements page.
General Information
Free Estimates
No
Eco-Friendly Accreditations
Yes
Payment Options
Check
Senior Discount
No
Warranties
Yes

We service ALL makes and models of gas and pellet fireplaces, stoves, inserts, log sets, and BBQs. We also sell and install gas, wood, and pellet hearth appliances, as well as outdoor fire pits, BBQs, glass doors, and other hearth accessories.

We do not do masonry work other than minor crack repairs.

How is The Fireplace Doctor Inc overall rated?

The Fireplace Doctor Inc is currently rated 4.8 overall out of 5.

What days are The Fireplace Doctor Inc open?

The Fireplace Doctor Inc is open:

What payment options does The Fireplace Doctor Inc provide

No, The Fireplace Doctor Inc does not offer free project estimates.

Does The Fireplace Doctor Inc offer a senior discount?

No, The Fireplace Doctor Inc does not offer a senior discount.

Are warranties offered by The Fireplace Doctor Inc?

What services does The Fireplace Doctor Inc offer?

The Fireplace Doctor Inc offers the following services: We service ALL makes and models of gas and pellet fireplaces, stoves, inserts, log sets, and BBQs. We also sell and install gas, wood, and pellet hearth appliances, as well as outdoor fire pits, BBQs, glass doors, and other hearth accessories.

Are there any services The Fireplace Doctor Inc does not offer?

We do not do masonry work other than minor crack repairs.