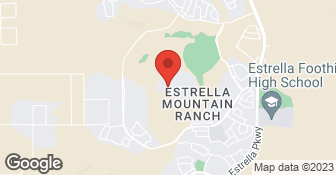 25 YEARS IN THE PAINT INDUSTRY. PROFESSIONAL CRAFTSMANSHIP.FREE ESTIMATES, NO TRAVEL FEES, WE GUARANTEE OUR WORK! "FOR PEOPLE EXPECTING EXCELLENCE"...

Mat and his crew were great. The house was pressure washed and the patio ceiling dry wall joints were repaired with new tape and mud. Also, all stucco cracks and holes were repaired. All the paint was done in a very professional manner and I would recommend them on any painting project.

Description of Work
Paint the house

One word - AMAZING. Not only is the interior look beautiful, the customer service was over and above from start to finish. If I could have rated an A+ I would have.

Matt arrived at our residence as per appointment time to do an estimate which I thought was very fair. We agreed on a date to do the job, which again he arrived on time. The fence was painted with the correct color, cleanup was completed and job was to our satisfaction. Matt is avery professional and courteous businessman and I would definitely recommend him for all your painting needs

Matt the owner of Consider it Finished Painting just completed an interior painting (full rooms and accent walls) project for us. Simply stated, he's the best painter we've ever had - and we've had many over the years. Why? He's very thorough and competitively priced with his estimating, very reliable, very neat, very efficient, very honest and meticulous in his work. Ned I say more. Thank you Matt!!

Consider it Finished did an excellent job and Matt was a joy to work with. I felt it was done in a timely manner, the work was amazing, and the cost was right. I will continue to use Consider it Finished Painting for any painting needs I have in the future.

Description of Work
We recently hired Matt Nicodemus (Consider it Finished Painting) for some interior paint work on our home. Our primary focus were two rooms for our children. Both had been painted by the previous owners with VERY dark paint and we were concerned with being able to cover the existing paint without it showing through the new. In one room we used 3 colors which included a very neat stripe pattern, the other room we used one solid color on three walls and an accent color on a third wall. As Matt worked on the rooms we ended up adding some additional small jobs along the way which included a hallway and touch ups throughout.

Matt Nicodemus (Consider It Finished Painting) painted the exterior of my home and did an outstanding job! My house looks great! I highly recommend Matt for any painting needs. He painted my house the week my mother had open heart surgery and I had no concerns being away from home all day. He is very professional, courteous and reliable. I will definitely use Consider It Finished Painting for any interior or exterior needs I may have in the future and I always highly recommend this company to my friends and neighbors.

Description of Work
Exterior of house painted. This included power washing all walls, scraping off loose paint, patching cracks and holes, masking windows and protecting concrete, landscape rocks and vegetation protected, cleaning all doors and painting a shed in the backyard.

The summer of 2011 was a tough one for our family. My mother and father were getting ready to move into their brand new home in Pebble Creek. A few weeks before their move-in, my father passed away. Moving to their dream home without him was devastating for my mother, and we all really needed all of the help and support we could get. As my mother was getting settled, she told me that she and dad had planned on doing some crown molding and ceiling contrast painting. I recommended Matt and Consider it Finished Painting. Right after his estimate, my mother could not stop talking about how professional Mr. Nicodemus was, and how kind and sensitive he was toward her and her circumstances. The thing that impressed her most of all was when he arrived for the job, he was prompt, and worked efficiently and seemed to really take pride in his work. She admired his attention to detail, and his obvious passion for his craft. Her exact words to me were: and quot;I would recommend him to anyone, regardless of how big or small the job. Your father would have so admired his timeliness and work ethic.and quot; Consider It Finished Painting made my mother smile in a very difficult time, and Mr. Nicodemus made her feel valued and appreciated as a customer. To me, that speaks volumes about a company. This job for my mother was done last year, and it still looks beautiful. Several of my mother's neighbors have complimented her home, and asked for references. This year, my husband and I plan to touch up paint our home and paint our children's rooms and our basement living area. We would not even consider going with anyone else. I cannot imagine anyone having anything but glowing references to a company so ethical and dedicated to customer satisfaction.

Description of Work
Consider It Finished Painting does great work!! They were hired to provide corrective finishing to a drywall/ceiling repair that was previously handled by our homebuilder's warranty contractor. While the drywall crack was repaired (somewhat), Consider It Finished was then hired to clean up the sloppy repair, and to apply the necessary paint/finish in order for it to be blended properly and brought back to it's original condition.

Description of Work
Full interior painting of a 1800 square foot home: This included the ceilings, trim, interior of closets, doors, around the windows, laundry room, bathrooms every room except the garage. Prep work, according to contract was 2 coats of paint, caulking around windows, filling holes, small cracks, cleaning the walls and doors of stains etc prior to paint, and then the final clean up. The entire home was original contractors white paint. It was very dirty. I had just moved in and many items were still in boxes, thankfully! It should have been a simple, quick job. Matt the owner misjudged the amount of time needed to prep the house including cleaning the walls and trim. He miscalculated the amount of paint needed. He didn't do a final clean up. We argued about the color of paint, the brand of paint, and several times, the application of the paint.

we purchased a new tract house which comes with yucky "tract house white" paint in all the rooms. As we hate this tint, we selected approximately 15 different colors (think: Mexican restaurant) that are more reflective of our tastes. Matt arrived on time every day and did a great job-especially with the unique hues. We arrived after the master bedroom had been painted but we decided that the shade was wrong and asked for a different color- no problem to matt. One room had "official University of Alabama Crimson" that required four coats. matt took care of it with out complaining!! Plus he was very pleasant in all of our interactions.

Description of Work
the interior of our new house was painted

We are a locally owned and operated company with over 20 years of industry experience. We value honesty and integrity in all aspects of our business. We offer a variety of construction, and home improvement and handyman services that are customizable to each individual project. We pride ourselves on the quality of our work as well as our commitment to outstanding results. We look forward to building lasting relationships with our clients and guarantee your satisfaction!  …

Seneca Painting LLC is a licensed, bonded, and insured painting contractor with almost 20 years experience in residential and commercial painting. We service the entire Phoenix metro area and provide free estimates. All of our work comes with a one year warranty.  …

We specialize in interior and exterior painting services, staining, cabinet painting, and more! We guarantee your satisfaction, and we won’t leave until the job is done right. We pride ourselves on the quality work we provide, while delivering great customer service! Check out all the services we offer below and call (602) 657-8824 or- click to schedule a free estimate today!  …

How is Consider It Finished Painting overall rated?

Consider It Finished Painting is currently rated 4.6 overall out of 5.

What days are Consider It Finished Painting open?

Consider It Finished Painting is open:

What payment options does Consider It Finished Painting provide

No, Consider It Finished Painting does not offer eco-friendly accreditations.

Does Consider It Finished Painting offer a senior discount?

No, Consider It Finished Painting does not offer a senior discount.

Are warranties offered by Consider It Finished Painting?

What services does Consider It Finished Painting offer?