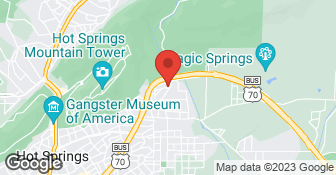 Description of Work
Unprofessional, overpaid, bullies, damage that was never settled, some were first time movers. Worst business relationship in my 50 years of services transactions.

Their employees were rude and discourteous. They did not fully expedite the packing and it was left to us (the customer) to point out obvious omissions. They were loud and boisterous, clearing not wanting to finish up the job. We were told in no uncertain terms that it was OUR job to clean up after them. They left their dirty cups, bottles, and cans strewn all over the house as well as other trash and debris. The front entry floor was covered with dirt and sticky substance, possibly a spilled drink. Upon returning from closing, we found they had gouged the hardwood floor in three places and tried to cover it up with a black magic marker. There was a large hole in the wall in the hallway. Neither of these glaring issues were brought to our attention or even mentioned. When unloading at the new residence, the "foreman" was condescending and rude. He chastised me for not being in my "place" to tell other employees where to unload boxes. When, in fact, I was answering a question from another one of the movers. At the end of the move, the foreman called the owner on his cell phone and discussed the number of movers and the time spent. The cost of the move was far greater ($4,854.10 check #1016 which was cashed on 9/2/14) than was originally estimated. While we understand that more people were enlisted to help and the move took longer than first thought...it also must be noted that the crew spent an inordinate amount of time at the top of the driveway...making loud conversations and kidding each other...while there was still many things to be packed and moved. There was at least another half a truck of items that had to be boxed and packed. There were several things that were known at that time which were damaged and/or broken. While we understand that accidents do happen, we also were under the agreement that we would be compensated for the breakage. We bought extra insurance for that exact purpose. For several days after the move to made several attempts {9/3/14 @ 3:11p,9/5/14 @ 4:20p,9/11/14 @ 11:07a, to contact the agent that had been our contact with Razorback Moving and Storage. After several days, she did return my call and we spent about 45 minutes on the phone (9/11/14) discussing the aforementioned concerns. She assured me that a company-wide meeting was scheduled and jobs would be lost. I stated that it was not our intent for people to lose their jobs, but to be trained so that no one else would ever have to experience what we had gone through with Razorback Moving and Storage. Since we were doing construction at our new residence, I asked how long we had in order to file a claim. I was told 90 days. In process of unpacking I found many more broken and damaged items. I was not surprised as the boxes were poorly packed and items were not properly wrapped. After completing the unpacking, we tried repeatedly and unsuccessfully to contact both the sales agent and the owner. I tried from my cell phone and our home phone...never did I get a response. Finally, our daughter was visiting and I asked to borrow her phone to try and see if I could get through. Imagine my surprise when the owner answered his phone! I told him my concerns and he assured me that the agent would handle everything to my satisfaction and she would be contacting me immediately. NOT to my surprise, she has yet to respond to our repeated calls and emails. I have pictures and text messages that I would be happy send as further verification. As of this date, February 5, 2015, we have had no comment or contact with any representative of Razorback Moving and Storage. We feel they have been disrespectful, dishonest and totally unprofessional in handling our move and subsequent dealings with them. We are asking for a fair market replacement value for all items broken and damaged in the move on August 27th and 28th, 2014. We are also asking for a rebate on hours paid for but not worked in the packing process. It is through this process we are hoping to spare any other unsuspecting customer the aggravation, frustration and cost of doing business with Razorback Moving and Storage.

Description of Work
They provided the service of packing and a moving our household goods from one house to another house in the same town.

It was an extremely lousy and unprofessional job right from the start. I have had previous experiences with movers so I was expecting them to be on time but they were half an hour late to start with. One of the movers constantly kept reminding us that they won't damage any walls but interestingly they did the same mistake again and again, both at our old place and new place. One of my beds had few screws used for assembly. The movers took those out while dismantling it at our old place and I kept those with me. Later on, I provided those screws to them before moving the stuff to new house. But after some time, one of the movers asked me for the same screws and informed that they don't have those with them. I had to go all the way back to old place and while coming back to new place, I got a call from them confirming that they found the screws and they were indeed with them. The biggest fiasco was my king size bed. They just did not understand how to dismantle it in the first place. The same bed had been dismantled by 2 other movers in florida without asking for our help hence we assumed that it would be fine. These movers did not inform us that they were having any trouble with it while dismantling it. And at the new place, they did the same mistake again. They tried assembling it somehow without understanding its structure and it resulted into my bed not in a shape to sleep on. Just imagine the agony I am going through when I see a king size bed in my bedroom but still all of us sleep on sofas since we can't sleep on it! Even during the assembly, they damaged the nearby walls, dismantled few pieces of bed which they should not have and broke certain angles. So when I started calling the owner he gave me the reference of the clause that the joints are not covered. But my question is the damage is much beyond just the joints!! A bed which was in perfect shape after 2 moves is in shambles because of these movers and they do not to pay any compensation for it!!! I am extremely distressed and this was the worst day for my life when I chose those guys as my movers. This is my sincere request to all of those potential families planning to move ; DO NOT CHOSE RAZERBACK MOVERS!! WORST MOVERS EVER!! DO NOT SELECT RAZORBACK MOVERS! DO NOT SELECT RAZORBACK MOVERS! DO NOT SELECT RAZORBACK MOVERS! DO NOT SELECT RAZORBACK MOVERS

Description of Work
The provider agreed to move all the furniture and other few small items to new house. It also involved dismantling and assembling big furniture like big dresser, king size bed and queen size bed. They moved all the stuff and assembled everything.

They were on time but they didn't bring any of the supplies I was told that they would like boxes and tape. We had to provide all of that. They were fast but that seemed to be their only priority. Most of the boxes were packed upside down so later when they were handled and stored for our move things were broken. It seems a simple thing to use the boxes up right. Chemicals that could have reacted with each other were thrown into boxes together and not labeled at all. Some boxes were miss labeIed or not labeled at all. They packed liquids that I had missed removing and they spilled in transit ruining some of our things. I expected some one a bit more professional but these were just a bunch of guys who didn't seem to know what they were doing. They were nice though. You get what you pay for. I would rather have spent a bit more money for a crew that was really professionals.

We liked Jeff Etheridge very much! He was professional, courteous, responsive and we appreciated that his team of movers had been working with him for over ten years. He gave us a lot of boxes for free that we could use to pack. His team was extremely competent in packing, and we highly recommend him to anyone in that area! They were coming in to load the stuff from our house into the shuttle van and they had runners that they put on the floor to protect our floors from their dollys. They even padded the walls so they wouldn't bump our walls with the bigger furniture. They were the best movers we have ever used and we've moved numerous times.

Description of Work
They did a complicated move, we lived in a cul-de-sac that they couldn't get a big moving truck in. The furniture had to be shuttled in a smaller truck to his own headquarters. It was reloaded into the large Mayflower van and it was moved from Hot Springs, AR to Foley, AL.

They worked hard and they took care of my stuff. They were early.

Description of Work
We used Razorback Moving & Storage for moving.

Razorback Moving & Storage is currently rated 2.7 overall out of 5.

No, Razorback Moving & Storage does not offer eco-friendly accreditations.