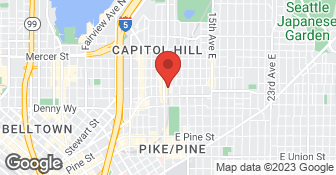 They were amazing A across the board. They were very attentive to my needs, explained everything that had happened that was going on, went beyond necessary to when my dog didn't come along with other animals they had always opened the back door and bring her to the back door to get her nails clipped and then bring her back outside to me afterwards. It was very responsive and very attentive.

Description of Work
I use Urban Animal for veterinarian services. We just put our dog to sleep.

Was told it was full of pus and drained, to put warm compress on it and to come back if it worsens. It worsened. The next day, I rushed my cat to my regular vet and was in the room when we tried to aspirate fluid. The bump/mass was solid. No fluid despite repeated attempts. I called and spoke with the owner who claimed she did the fine needle biopsy and slide review herself. Neither item showed up on my bill (large needle biopsy was charged, and the examining vet was male). This is a business and I doubt they would have done this without charging me. I have retained all documentation and correspondence.

Description of Work
Cat had a bump on her back that grew quickly from dime to quarter size.

No appointment needed. Lots of dogs, but no other cats I saw. The vet who saw her diagnosed it as an abscess, started her on an antibiotic and said to get it looked at in a couple days if it gets any larger. I did as he instructed and it did get larger overnight so concerned, my normal vet squeezed Blue in on Sunday. I was in the room when my vet tried to aspirate some pus/liquid to test. I was charged for a fine needle aspirate at Urban Animal so we both assumed the dx of an abscess was based on that. (stated on the itemized invoice). The lump is solid; there was no liquid. It was not an abscess. It is not bacterial. So. Not an abscess and no need for an antibiotic. On my vet's advice, I sent the cells we did get to a histopathologist. I contacted UA and asked how could their dx be so wrong. A female vet phoned back and said she used a large gauge needle and aspirated over 2 cc's of liquid (didn't charge me for that). She looked at it under the microscope and saw white blood cells, evidence of something else chronic going on (didn't charge me for this either, she said). She used a large needle so it would keep draining after I went home. My vet was absolutely right in sending the cells to be looked at by a histopathologist. She was adamant it was an abscess and she "took care of my kitty as if it were her own kid." OK. I got an itemized bill. UA is a business. I'm sure if they did something gratis, they would have mentioned it to me so at least I would know about it. Nowhere in my exit convo with the vet during my visit did he mention anything about potential injection site reactions or sarcoma, recommendations for a histopathologist, or even making any slides to look at under a scope. Why it was another female vet who did the exam was not explained to me, nor even brought up. I was IN THE ROOM when my vet used 3 needles to try and get some cells. The lump was solid. I can't believe the blatant falsehood. UA charged me $108 for 15 mins, a mystery size needle aspirate, and the wrong meds. My vet (who made slides with poor Blue's cells in front of me) did not charge me for the slides and told me she would charge if I decided to send the cells to be seen by a specialist. She carefully explained what she thought it was and why she advised consulting a histopatologist. She spent 45 mins with me and her invoice came to $58. And she didn't needlessly destroy my cat's gut flora /digestion with antibiotics. Misdiagnosis, followed by blatant lies. No, I can't recommend Urban Animal. Maybe they're better for dogs.

Description of Work
I brought my cat, Blueberry, in to get a lump checked out Saturday, 10/22.

Puppy diagnosed with Kennel Cough. Prescribed Clavamox, an antibiotic not usually efficacious for Kennel Cough, because they were out of doxycycline, the appropriate, fast acting antibiotic. As a result puppy's illness did not improve. He continued so ill for the next 7 days that he could only cough and sleep, thus completely missing a vital learning/training week of his puppyhood. On day eight he was finally started on doxycycline. He became completely asymptomatic and went back to normal activities after only a day and a half. Doxycycline is a common generic antibiotic. When the vet saw that his clinic was out of it he should have called it in to any pharmacy. This veterinarian seemed unengaged, uninformative, and unresourceful. A second vet was not candid about the negligence of prescribing the wrong medication and the commonality of doxycycline.

Dr. Sherri Trusheim is what every vet should be. Can't say enough good about her and the clinic. They truly, truly CARE about the pet (and owner). Most services are walk-in, although they do schedule elective surgeries (like my little girl's spaying). Staff is fantastic, but I know when I bring her in there she'll get the best possible care, explained to me clearly, with all options and costs discussed beforehand. Friend of mine's 12-year old has terminal cancer, maybe three months to live. Sherri will come take her to her new home at her home...trying to bring her back to the clinic would terrify her. Best vet and clinic in Seattle.

We had been looking for a new vet after our old place went downhill and quality and service. We've been here a few times and have not been disappointed! There are no appointments necessary and you can "pre-register" online if you plan to bring your pet in later in the day. Everyone on their staff is very friendly and knowledgeable and you can tell they really care. The price is affordable and they don't over-charge or charge unnecessarily like other vets we've been to in the past. The photobooth in the clinic is a nice touch and a fun way to get some photos of you and your pet(s). I would highly recommend Dr. Trusheim and her staff!

Description of Work
Examination and consultation for our dog & prescription

VERY convenient, because there is no appointment necessary. Kind of like Zoomcare for animals! Didn't have to wait much more than 20 minutes total. I LOVE the vet! She's professional without being stodgy, informative without being boring, and straightforward without being brusque. The front desk guy was completely awesome, too. 1: My partner arrived before I did and got our cat's intake paperwork started easily. Then I arrived with the cat and my partner went to pay for my parking. Didn't faze the guy, he just showed the cat and me into an exam room. 2: I thought after we left (had to return the Zipcar in a hurry) that we'd forgotten our paperwork, which was of course had already been emailed. The guy was very nice about my mistake! My only regret was that I didn't write down the directions before leaving the house. It's slightly hard to find, the first time.

Description of Work
Had never been to this vet before. Took in my newly adopted senior cat for a wellness check-up. (Oh, and before the visit, we had called in a day and a half earlier, because we were worried about the cat's low appetite, and they were helpful and reassuring on the phone, agreeing that the cat didn't need to come in yet.) Our cat got weighed, the microchip was scanned, and the cat's eyes were looked at because they've been mostly dilated. Of course the cat is slightly overweight, so the vet recommended what her caloric intake should be at ideal body weight. We also got the chip number and told us it was "Home Again" and not yet registered. The cat's irises have slight irregularities (though pupils do contract), so we got the name of a veterinary opthalmologist in the U-district. After paying, we got an email receipt, with all the information about the recommended feeding, microchip, and ophthalmologist was on the attached form. SUPER CONVENIENT. Totally modern.

The doctors and staff are great. It is a walk in clinic so no appointment needed, not really a wait.

Description of Work
I use Urban Animal for dental and allergy work for my pet.

All statements concerning insurance, licenses, and bonds are informational only, and are self-reported. Since insurance, licenses and bonds can expire and can be cancelled, homeowners should always check such information for themselves.To find more licensing information for your state, visit our Find Licensing Requirements page.
General Information
Eco-Friendly Accreditations
No
Payment Options
Visa, MasterCard, American Express, Discover
Senior Discount
No

How is Urban Animal overall rated?

Urban Animal is currently rated 4 overall out of 5.

What days are Urban Animal open?

No, Urban Animal does not offer eco-friendly accreditations.

No, Urban Animal does not offer a senior discount.

What services does Urban Animal offer?