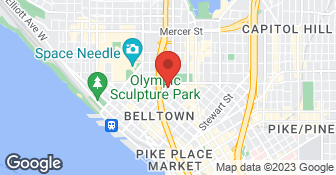 I have used this Elephant Car Wash location downtown Seattle many times because despite the difficult location (due to a traffic rule that prevents a left turn, if you approach from the east, you have to circle the block and approach from the west) the quality has generally been good. It all started good this time around too. I asked for a $35.99 Platinum Wash (exterior wash with special foam to shine and protect, wheel dressing, interior hand wipe including door jams and dashboard). The cashier offered me a special package of 4 washes for the price of 3, which I charged to my American Express Card. So far so good. I moved to the waiting room to wait for my car. A few minutes later the car rolled out of the wash and was driven over to the parking lot where the employees were working on the other cars. My car was parked and the driver's door was left open to indicate that it was ready for the next stage. I have used this car wash many times and I know this is how it works. So far, no worries. But no one ever worked on my car. It sat and sat while other cars came and went. The employees worked on every car but mine. The supervisor of the outside area looked at my car and even walked around my car but never touched it and never directed anyone else to. After 30 minutes I complained to the cashier who looked out the window and told me that he was "short handed" and that it would just take a while longer. After 60 minutes, a full hour, I approached the supervisor outside who told me that I had only paid for an exterior wash, the car had been ready for an hour, and that he had come into the waiting area and asked who's car it was. He had not. At this point I went to the cashier and asked for my money back. He and the assistant manager disappeared, then returned to the counter and told me that the car was now ready. They refused to void my credit card transaction and return my money. When I retrieved my car, it was clear that a hurried effort had been made to wipe the interior and dress the tires while I was waiting at the counter. So, a full hour and 15 minutes spent for an incomplete Platinum Wash, and the assistant manager refused to void my credit card transaction. I am left with three more washes paid for, that I suppose I will try to use at another of this company's locations. I shall be complaining to my credit card company, and to the Better Business Bureau.

The interior was immaculate when I gave it to them, so they didn't need to touch the inside, but there was still a splattering of bird-do when they were finished, which I didn't see until later. I would have been pretty unhappy had I paid full price.

Description of Work
Gold" car wash. Including wash, wax, vacuuming, and hand drying. I had a half price coupon

My experience with Elephant Car Wash was good and they were professional. They were accommodating and we did not have to wait a long time to get our car washed.

Description of Work
I have been to Elephant Car Wash a couple of times for regular car wash.

I've had this done many times on multiple cars at the Elephant Car Wash in Bellevue. For this price, I think their work is only adequate. The real work is in the drying and finishing that the worker does after the car comes out of the car wash, and that finishing work is highly dependent on the individual worker. They won't go out of their way to do a great job--it's mostly just drying the car off. A fair amount of dirt still present. If you point it out to them, they'll work on it a little. I agree with one of the previous reviews--they don't pay attention to the top of the car under the luggage rack. They also will not touch tree sap, which is pretty annoying after paying $25 (with a coupon).

A tip is a very good idea at the end of the service. Be sure to take the coins out of your ash tray; they are not likely to all be there when you get back to your car.

Description of Work
Car wash/wax and cleaning of the interior.

Quick and efficient. They really did a great job on a vehicle that was just so totally neglected by it's owner (me!) that I almost don't want to sell it now. For the price paid I definitely received full value and then some. The staff was nice and performed quality work quickly.

Description of Work
Washed my car.

WE USE THEM A FEW TIMES EACH YEAR. THEY ARE QUICK, AND RELATIVELY THOROUGH. THEY DON'T SEEM TO GET TO THE TOP OF THE VEHICLE WITHIN THE LUGGAGE RACK AREA.

Description of Work
CLEANED INTERIOR, AND EXTERIOR OF CAR.

ELEPHANT CAR WASH is currently rated 4.3 overall out of 5.

No, ELEPHANT CAR WASH does not offer eco-friendly accreditations.