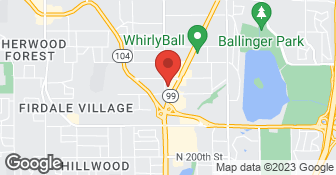 Village Transmission & Auto Clinic has been providing full service quality auto repair in Seattle, Edmonds and Shoreline Washington for more than 52 years. Our workmanship is unmatched in the North Seattle area and we have developed a great reputation over the last four decades. You can be certain that when you bring your car or truck to us it will receive the highest care available. We have ASE certified technicians who are highly trained and experienced at what they do. They can work on all makes, models, and years. From basic to complex, from automobile repair to transmission repair, our team can get the job done. From our fair prices to our great value Village Transmission has you fully covered. Over the years we have not only built an excellent team but invested in the newest tools that allows us to do our job not only better but faster. Invest in your vehicle. With today's fuel prices you need to make sure your vehicle is running as smooth and efficient as possible. We have a fuel economy package for all Shoreline and Edmonds residents that allow your to fight back prices at the pump. Its in your best interest to take advantage of it! For your convenience we are open five days a week, Monday through Friday, 8AM to 5PM. You can walk in, call us, or schedule an appointment online by filling out our contact form. When you give us a call make sure you ask our service adviser for details relating to your car. An automotive repair facility does not stay in business for over forty years if it is not doing something right. Offering substandard service will only get any business, much less an auto repair and transmission shop, so far. It has been hard work but we have grown our family owned and operated company into a full service one-stop shop that can accomplish almost anything. We specialize in automatic transmissions, standard transmissions, clutches, differentials, Transfer cases , racing applications, street rods, classic and vintage cars, Air Conditioning, Emissions and much more. Ask any resident of Edmonds Wa or Shoreline Wa who their trusted automotive mechanic is and they will tell you Village Transmission!...

From the moment you drop off your car until the time you pick it up, we are ready to listen and have the expertise to maintain your vehicle. Our technicians work directly with you, offering a level of service which dealership mechanics cannot provide. Whether you're broken down or just taking care of routine maintenance, Turn Key is your car care partner....and we're here for you between visits as well if you have any concerns. That makes us the full service dealer alternative.  …

All-Star Auto Glass is your local choice throughout the Puget Sound region for windshield repair and replacement services. Our mobile auto glass repair technicians can be dispatched to your home or office for convenient service while you wait, or you can visit our shop conveniently located in the SODO district of Seattle. We are a preferred provider for all insurance carriers and our expert staff will guide you through the claims process. You get 3 months free Beary Clean carwashes from Brown Bear and we offer a lifetime guarantee against leaks and workmanship with all front windshield replacements. All-Star gives you fast, safe, windshield repair and replacement service and is a registered member of the Auto Glass Safety Council.  …

I was referred to Village transmission by a friend. as everybody knows in the Auto industry there's a lot of shady people. I contacted Jerry he assured me that it would be done right without a headache without any surprises. I found out their father started this business many years ago and three brothers run it now. It's nice to know that the Three Sons continued their father's Legacy. Everything went smooth from setting up your original appointment as my H2 Hummer transmission went out. They gave me a rough estimate of cost I said that was fine they did the work I've had my Hummer back now for a couple weeks and everything works perfect I would highly recommend the team at Village Transmission & Auto Clinic for anybody that needs auto-related work done that they do. The staff is very friendly and personable from top to bottom. Thank you again for taking care of my vehicle and resting me a sure that it would be fixed right the first time.

.I love them. They are always helpful, they are very sensitive to cost. We have old cars, so their like here's a list, you don't have to do it all now. They can always fit us in, there great.

Service was prompt and efficient, price was reasonable and the staff were friendly.

My van was making a strange noise so I dropped by to see if it was serious. Curt got me right in to check it out. It was one of my belts going bad. Curt got me an apt for the next day and loaned me a vehicle for the duration. The repairs were below the estimate and completed ahead of schedule. I couldn't be happier . These folks don't want to just fix your car they want to be your repair shop for life. They know their craft and have people to walk you through the process. When a repair is made they show you exactly what was done. Before finding Village I had many negative experiences with auto repair shops and dealers. I will be a client for life and send everyone I know to them.

One of the few auto shops in the greater Seattle area which has someone at the front desk giving customer service full time. The clutch went out on my truck and they replaced it in about 2 days and instead of scrapping some of the parts they were able to rework them which saved me a lot of money. The staff was friendly, knowledgeable and they even let me go into the mechanics area and look at all the work they did to my car. Another good thing they do at village transmission is they call with updates, its just down right discourteous and unprofessional when mechanics have your care and forget to call you with updates, I was so relieved that I didn't have to hound to find out what was happening with my truck. I had a 5 star experience and I have recommended them to my family and friends.

It went well. They were flexible and were very communicative regarding what did and did not have to be repaired or replaced.

My car was overheating due to low coolant levels and poor fluid circulation. I brought it in explaining that it was a back-up beater car and I didn't need it to be perfect, just functional. They said the radiator was so clogged that nothing would go through and it needed to be replaced. They quoted me $1500! I told them I bought the car for $600, so no way. They said they could try to flush it under pressure and get it cleared enough to work, so I told them to go ahead. But then they called during the process and said it wasn't working. So I paid for their time and took back a car that was in exactly the same condition. They fixed nothing for my $150. My dad was able to clear the main blockage by forcing air backwards through the radiator and now the car works fine. Sure, it's not the optimal fix but, like I said, it's a $600 car. I didn't feel like these guys were level with me and understanding that I just wanted an operational car- they were trying to sell me on a huge pricey repair that was way out of scope. If they had been more level with me, I wouldn't have ended up paying for nothing.

Description of Work
Tried to flush radiator but stopped after saying that nothing would go through. Didn't charge me for the full service but did charge me for time/coolant and it came to more than my voucher.

It was great. They are highly professional. Provided the data and information. They also say their opinion and recommendation. It is up to us as to how to follow-up based on overall our personal situations and/or conditions. Hassle free. Honest and Trustworthy!

Thank you for the Review! Its People like you that allow us to Enjoy doing what we do. Dave
4.0

All in all, Village Transmission worked out well. Earlier in the morning I replaced a tire and it was recommended to get a wheel alignment done. I soon discovered that most shops don't have an alignment machine, or were booked way out. Village transmission was able to do a 4 wheel alignment (not just the front drive wheels) at the cost other places charged for a 2 wheel alignment. Even better, they were able to do it that afternoon. I'm sure if their oil changes weren't so expensive I'd use them for that as well...

Description of Work
Village Transmission did a 4 wheel alignment on my Mazda sedan, same day appointment.

Very impressed with their service. So relieved to find this reliable honest dealer in our area. We were given a detailed list of all our options with pros & cons. They were very helpful in keeping our costs down. Work is guaranteed. Car was ready on expected date.

Thank you for the great review! We appreciate you!