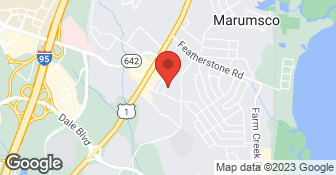 W.E. Beavers Heating and Cooling opened for business 18 years ago to help clients in Woodbridge, Virginia and surrounding areas feel comfortable in their homes all year long. Our owner has worked in this industry for more than 40 years. We pride ourselves on our customer service because we care about the comfort of every client we meet. When you need an experienced HVAC contractor to restore the comfort of your home contact us!...

Waking up to a hot house is never fun. The builder installed AC unit in my townhome finally called it quits and I had to get an entire new unit. I scheduled three estimates, two with companies and those trucks that everyone sees driving up and down 95 and also with Bill of W E Beavers. Bill was able to get here quickly he gave me a solid estimate that was of course comparable with the other guys and said he would be able to start work in just a couple of days, not next week like the other guys. Bill was able to install an entire Carrier unit in the timeframe quoted. Him and his assistant were professional and respectiful in my home. He clearly explained how to register my unit for warranty and that he stood behind his work in case I had any problems. The job went perfectly and my house is cool again.

Fabulous work. Very responsive. Prices very competitive. Hard to beat. Great products. Wonderful knowledge. Love the service. This project was done over a one year period, at my request. I am thrilled with the outcome.

Thank You, stay cool Yours truly
2.0

Firstly, he did not wear his mask covering his mouth or nose while in our house, nor did he stay 6 feet away from us. When I backed up to properly distance, he commented that I was "scared to be close to him." Umm, no, I just want to follow proper protocol during a pandemic. Then he spoke "at us" for well over 30 minutes about our system being too small for our house and that we needed to upgrade. He did no real work, just gave us a lecture and collected his $100 service call (for which we did not receive ANY service). What a waste of my time and money.

Description of Work
Service and maintenance for our Air Conditioner

Our air conditioner broke Saturday late afternoon. I called W.E. Beavers Sunday morning and they replied later that day and confirmed they could get a replacement unit and have someone available to replace the unit the next day (Monday). We rent our house on Airbnb and had guests coming in Tuesday afternoon, so not getting the unit replaced meant having to refund money to guests. Considering other companies were quoting a month or more before they could get a unit and get someone out to our place, W.E. Beavers went above and beyond the call of duty and literally saved us thousands of dollars in potential refunds we would have had to issue if we had to wait a month for the unit to be replaced. Bill Beavers was extremely professional and responsive; I highly recommend them for any HVAC job.

Excellent! They were professional and friendly.

Description of Work
Checking out my AC and heating unit.

It went well. They're friendly and efficient. They came when they said they would come. They explained everything to me.

Description of Work
They checked out my stuff. They looked at my equipment.

A year ago when there was a problem with the boiler I contacted about 5 companies before I found one that would work on it. I called Bill & he & a helper showed up in less than 1 hour (on a Saturday afternoon when the temperature was about 20°). He discovered that the thermocouple had been installed incorrectly last year by the other technician & that was why it failed. He had it diagnosed & repaired in less than 1 hour.

Excellent service! Found that the humidifier was still running during the summer and had a disgusting amount of mold buildup. Highly recommend!

Description of Work
We recently purchased a house and needed the A/C serviced.

We recently used Bill and his team to install a new furnace and they did an excellent job. The price was fair, the work was done quickly, cleanly, and completely. He followed-up to ensure that everything was good, and he even installed a new thermostat free of charge. Bill has provided consistent, high quality, reasonably priced work for us for years and we expect that will continue for many more.

I live in a condo and rent directly from the owner. Long & Foster who manages the apartment, sent W.E. Beaver to check out our AC/Heat unit as it never keeps the apartment cool during the summer or warm during the winters. Rather than inspecting the motor, Mr. Beaver's first actions were to walk around and point out all the things we're doing wrong (such as keeping the bedrooms' door closed, not having curtains in the kitchen, having old single pane windows, etc.). He also didn't hesitate to point out that my cat is fat. Who is he? A veterinarian or a contractor? He also pointed out that the blow-out vents are positioned too close to the ceiling, which in turn limits efficient air distribution. Finally, upon looking into the 30+ years old motor, he concluded that it works at capacity and that there's nothing he can do.

We set up a service agreement with Bill after he installed a new air conditioner. He had not worked on our furnace at all. I listed the cost of the service agreement as the price, but our bill for the day was ZERO. In mid-December, our carbon monoxide alarm went off. Bill and Marco came out and discovered lethal levels of carbon monoxide in our basement. They found that the company who had done our gas conversion had put two exhaust vents (furnace and water heater) right next to each other, too low to the ground, and facing down, where they exited the house. When our gas furnace began to fail, it produced a lot of carbon monoxide. Well, that's why you vent the exhaust to the OUTSIDE, not the inside of your house. But because the vents were installed incorrectly, the CO was getting sucked right back into the house, through the water heater exhaust vent. It took a couple of hours to figure this out -- when you see carbon monoxide in a house, your first thought is probably not "It's getting sucked back in from outside." But they turned the furnace off and on, and spent a horrifying afternoon going in and out of our basement with their carbon monoxide meter going CRAZY. They put themselves at risk, found the problem, and showed me was going on. I won't name the company that did the incorrect installation. [Bad Company] was horrified when they learned of their error and they installed a new furnace for us at greatly reduced cost. They behaved honorably. But I DID have to get out the manual and make them re-do the new exhaust vents because GUESS WHAT, [Bad Company] put the NEW exhaust pipes right next to each other. I'm really, really done with that company. If you don't have a carbon monoxide alarm, get one. And Beavers Heating and Cooling doesn't mess around. Good people.

Description of Work
SAVED US FROM OUR INCORRECTLY INSTALLED FURNACE. I'm not kidding. My entire family could have been killed.

I've been using them for about 3 years. The service is awesome, very good.

Description of Work
I have used W E Beavers Heating & Cooling. Last time they came out to do maintenance.

When the piping was not quite right they came back instantly and fixed it. It is a small firm and they are good folks. They are very congenial, forthcoming, and objective. They do not try to upsell you. The cleanup has been excellent.

Description of Work
I have a service contract with them. They have also installed a humidifier. They also do the routine maintenance on our gas furnace.

They took two days for the installation, which is a bit more time, but it was well worth it.

Description of Work
Bill Beavers and his assistant Marc installed a Carrier Furnance and A/C unit. He was the only contractor to recommend moving my hot water heater to accomodate a larger air filter-all in all more efficient to move the unit. Both men were very professional, answering all my questions. I would not hesitate to hire them again.

Everything checked out very well. Beavers does an excellent maintaining my heating and cooling systems. They have had my business since 2007 when I replaced my builder grade units. I trust them totally.

Description of Work
Bill and Marco cleaned my a/c unit to ensure optimal operating efficiency. They checked both the inside and outside units as part of the service contract I have with Beavers Heating and Cooling.

Description of Work
Bill Beavers was recommended to me by a colleague who had been using his services for years. When my 20-year old HVAC system failed 3 years ago, Bill came out, assessed the situation, quoted me an excellent price, and was installing the new system within days ... to be exact on the absolutely hottest day of the year! He and his crew installed the new system, leaving the whole house cleaner than when they arrived! As a result of having the new system put in by Beavers, I signed up for their yearly maintenance plan which involves a Spring and Fall tune-up, and I've been very happy with his service.

Excellent service; Mr. Beavers takes the time to explain everything, doesn't try to sell you something you don't need; makes suggestions about future maintenance. He is responsive and returns phone calls/voice mails.

Description of Work
Mr. Beavers installed my HVAC two years ago (very happy). This call out was for the spring service, at which time I signed up for a service contract. My system is only 2 years old, and was installed by Mr. Beavers.

I am not sure if I would recommend them at this point, because I have stopped using them. I stopped using them because of the price and some misleading information involving trying to sell more than they needed too.

Description of Work
I have used W E Beavers Jr. Heating & Cooling to maintain my heating and cooling units in the past.

We wanted to get set up with maintenance contracts for two HVAC units in our home and a large addition. Mr. Beavers came promptly to our appointment and examined both units thoroughly and gave a detailed report on each, including their expected lifespan. He was very knowledgeable and did not try to up sell us.

Are there any services W.E. Beavers Jr. Heating & Cooling does not offer?