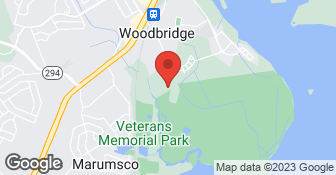 Mid Atlantic Contracting Inc. is a full-service construction and home improvement company serving homeowners in Virginia and Maryland. Family-owned and Class A licensed, the high level of quality and dedication that we bring to each job, large or small, has kept our customers coming back for over 30 years. Mid Atlantic Contracting Inc. was founded in 1979 by the Fletcher family as a small firm. We have expanded considerably since then, obtaining our Class A license and offering a full array of home improvement needs. In over thirty years of helping homeowners and businesses, we have never forgotten our roots. We are still family-owned, and we still bring the same level of integrity, commitment, and quality to every job, large or small....

Established in 1981, we have been providing quality products and services at a reasonable cost to customers for over a quarter of a century. At HAL CO FENCE we have installed quality fences, decks, and screen porches that have added value and beauty to thousands of commercial and residential customers in the Northern Virginia area. Our services include design and installation of all types of fences, decks and custom screen porches along with the specialty features that often accompany outdoor additions. We are a family owned and operated fence and deck contractor company with a hometown attitude. We have a long history of satisfied and happy customers and would like for you to be one as well. Our continued growth has been realized, not only through our customer satisfaction, but also through the addition of better designs and quality products. We are customer driven and have your best intentions in mind. Our crews are courteous and dependable from whom we require excellent workmanship. We offer standard, as well as custom designs and use the finest products available for decks, fences, porches and porticos. From wood to composite, to vinyl, steel or aluminum, we have what you are looking for. Demanding new designs and environmentally compatible materials is a cornerstone of our commitment to providing fences, decks, screened porches and porticos that will appeal and last through the ages.  …

FOR A FREE ESTIMATE PLEASE CALL (703) 585-1932 TODAY. ABL Painting has the ability to transform your residence with the stroke of our paint brushes. We always use quality paint products in order to never put our clients through fading, peeling, and the falling of their paint job. Remodeling is not necessary for the transformation of the look of your estate, a simple paint job from ABL Painting will do. Family owned business with 12 years of experience. Customer service is our number one priority. Check out our commercial at https://youtu.be/lfEB1nZvFfg  …

Outstanding work. I am more than satisfied. The worker were very professional. A neighbor saw my deck and is having one built . Dave, the sales rep is outstanding to work with. I am having Mid Atlantic to do a deck to my shed.

It was good working with Erick and the MidAtlantic crew. I found the company via our church bulletin. Erick was my initial contact and stayed involved throughout. We texted and emailed among Erick, office manager Lindsay, and me from start to finish. When Erick wasn’t on site, his brother Jamie was in charge. My observation was the crew had worked together before; they all had their tasks and got along. Their end product, clean up, and execution all went well; the cleanup was particularly impressive considering they were all over the house. We originally had a roof leak that showed up inside the house on the stair landing between 1st and 2nd floors. Erick did the initial check of the roof and attic space looking for the source and damage. We found the initial problem in December. MidAtlantic did temporary patches on the roof to get us through the bad weather. All the patches held and there were no further leaks. Erick said he could have a crew there almost immediately to replace the roof; however, checking with the manufacturer the recommended temperature for shingle installation is 40˚F or higher so we delayed and rescheduled several times for good weather. The day after they finished the job we had a thunderstorm with high wind, heavy rain, and hail. It was a good test – no problems. A few issues came up that Erick resolved. The nails delivered to the site by a vendor weren’t what was in the contract nor were the color of the ridge cap shingles. Our contract specified, "ring shank" nails but smooth came to the site. Similarly, our contract called for “charcoal black” shingles but the ridge cap shingles delivered to the site were “black”. After discussion with Jamie and Erick, both items were promptly corrected.

MidAtlantic Contracting Inc. “Another Satisfied Customer In Triangle Va.” May 2018, we contracted MidAtlantic to give our home a face lift which consisted of New roof and exterior painting. I would like to say we are very pleased with outcome of the entire project. Erick and Lindsey were our point of contacts throughout the project. When any questions needed to be answered they were answered or any miscommunication it was quickly resolve in a quick and professional manner. Very pleased with the roof and exterior painting. I would recommend MidAtlantic to do any of your constructions needs. Attention to detail, professional and courteous are all words to describe MidAtlantc.

Description of Work
Install new roof, paint exterior trim and base of home.

MidAtlantic did a great job tearing off the old shingles and replacing our roof. They came out and covered the area that was affected after the storm until they could get there to replace the roof. They used a sturdy cover, not the blue tarp that some companies use that could fly off. They did it right as Mike Holmes would say! I would definitely hire them again for other stuff. Thank you MidAtlantic for coming to our rescue.

Superb - one day completion with follow-on check to solve/resolve any potential problems. And the owner/manager came back again to ensure all was in order and the customer satisfied. He even did certain touch-ups at no additional cost. Most impressive team and management.

I would highly recommend MidAtlantic contracting Inc. for any roof repairs, painting, drywall repairs, etc. They are a fantastic family run company, they worked with us and our insurance company seamlessly. They are amazing from Vanessa who answered our calls during the process to Lindsey who walked us through the insurance end. Erick and his crew were professional, timely, and caring during the whole process.

They did an excellent job! The company president, Erick Fletcher, was very hands on and oversaw all aspects of the job. He is very knowledgeable & competent. The workers were professional, courteous & very accommodating. They did a terrific job of clean up, including using a metal rake to ensure all roofing nails were picked up around the house & in the driveway. The job was completed in one day on our ranch with its 4,200 sq. ft. roof. There was an issue with the fan in the master bath that wasn’t noticed until it was used the next day. Erick came back to fix it without hesitation. Lindsay & Vanessa, in the office, were pleasant & helpful when calling/emailing Mid-Atlantic. We highly recommend this company & would not hesitate to use them for any future work we needed done.

Many thanks to MidAtlantic Contracting, Inc. for an AWESOME job on the replacement of my roof, gutters, and downspouts. I am VERY PLEASED! Owner/President Erick Fletcher and his workers were very meticulous and highly skilled which is critical to the success of any business. Erick certainly delivered on his promise to do an outstanding job! I am thankful for having him as my contractor for this job. The customer service and process was A+ from beginning to end. My preliminary experience was quite pleasant. In the beginning stage of the process even before the work had begun, I was impressed with both the professionalism and response time on phone calls and emails from Erick and his sister Lindsay who helps to run the business. The day before work was to begin, the roof shingles and other supplies were in the driveway ready for the next day. At the completion of the job, my yard was cleaned thoroughly. Erick is an efficient contractor who has a very organized system in place. This is indicative of a company who really cares about its reputation to its customers. Integrity and honesty will go very far in a business. Erick, his sister Lindsay, and his brother are running a highly efficient company which takes years of skill and experience. I know their father would be very proud of them and the success of his company that they have taken to a higher level. Thanks to all of them for their professionalism and commitment to outstanding customer service! I highly recommend this company for roofing and other home improvement needs.

Description of Work
Replacement of roof, gutters, and downspouts

Erick, Lindsay and the crew were all terrific. The guys did the roofing job during a very hot period, 17-19 July. It looks beautiful and clean up each day was great. I'd not hesitate to hire MidAtlantic again for any job. Thanks for the fantastic experience. L&L