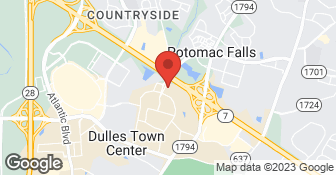 We serve patients of all ages, specializing in arthritis, sports-related injuries, problems and injuries of the knee, hip, shoulder, foot, wrist, elbow, neck and back pain. There are 5 doctors at this site. Surgery is not performed at this site. To see if a provider is board certified, visit www.abms.org....

The office staff is very efficient and well organized. I arrived on time, filled out the required info and was seen by the doctor within minutes. I specifically chose Dr. Sabina Malhotra. I've found that women physicians are more focused, more detail oriented, more compassionate and definitely have a better command of doctor/patient communication skills. Dr Malhotra is young, dedicated and exceeded all expectations. If you are looking for a good practice and a great doctor, Arthritis & Sports is the place to go and Dr. Malhotra is the doctor to see.

Description of Work
Treatment for foot fracture and sprained ankle.

Great place. Everyone is so nice from the minute I checked in and was taken back to a room. My appointment was on time and everything was very efficient, including x-rays. I saw Dr. Wilson - great bedside manner, very professional and has a great sense of humor, which was appreciated. I highly recommend them.

Description of Work
I have had pain in my left heel for quite a while and regular doctor visit was not able to help.

He answers my questions, explains things and spends time to answer my questions. When you schedule a surgery with him he takes time to explain things to you.

Description of Work
I went to Dr. Matthew Griffith in August for a followup from a surgery.

He is great. His staff is very good. The facility and the administration. They make life so easy. He is highly recommended and he did a great job on my knee. I would use Randall Peyton for any of my issues.

Description of Work
Dr. Peyton did my knee surgery. I had a torn meniscus and he went in and cleaned it up and straightened it out.

Series of knee injections were convenient and comfortable. Dan the PA was wonderful. Very knowledgable and skilled in the procedure. Was able to schedule during my work hours.

I've been going to physical therapy for the past two months following a patella fumeral replacement. I have been extremely pleased with the service provided by this provider. They are extremely punctual, I've never had to wait beyond my scheduled appointment time. The therapists are extremely capable and tailor treatment to each individual. I was rehabing a bit slower than most due to a separate physical limitation and the therapist modified the exercises to ensure I was strengthening my knee in a pain free manner. The therapists take the time to discuss my progress and concerns. It's very refreshing to have the full attention of the therapists and to know that they really do hear me and want to ensure they are tailoring the treatment program in such a way that I gain the most benefit. I highly recommend this provider for anyone needing physical therapy.

The surgery was an out-patient surgery and overall, it went very well. Dr. Griffith's team of assistance (and the overall support of his office at Arthritis and Sports) is excellent. Dr. Griffith had prepared me with a lot of information regarding what to expect the day of surgery as well as the recuperation time afterwards. The doctors seemed very knowledgeable in their skill and experience to deal with shoulder surgery of my kind (bankart repair). I felt very informed and was able to plan out the post-op physical therapy and follow-up visits without any problem. I will definitely see Arthritis and Sports (and Dr. Griffith) again.

Description of Work
Arthroscopic shoulder surgery (which evolved from a dislocated shoulder). Surgery was performed by Dr. Griffith.

I was initially evaluated by a therapist, who spent about half of the hour-long appointment with me. She was with me for a minute or two, and then was busy doing other things, but I didn't see that she was helping other patients. When I finished an exercise, she'd stop back by to give me another assignment. I'm not sure what to expect, but a couple of times later in the appointment, other people came by to tell me what to do. I can only assume they were sent by her, but I don't know. I was often turned the opposite direction. At the end of this session, I was given a page that had about seven exercises for me to do. I did these exercises daily for the next week while I was out of town. I returned for the second appointment and saw someone else. This therapist was a bit more hands-on, but I was still basically told to "do my exercises" and then left alone. She then added more exercises and I went home after the hour with no printout listing the additional exercises. Between the second and the third appointment, they had switched to a new computer scheduling program. At 8:15, fifteen minutes after my appointment was to begin, I asked the receptionist when I'd be seen and was told that my appointment wasn't scheduled until 8:30. I told the receptionist that I had purposely had ALL of my appointments scheduled at the same time so that I would not be late. This set the rest of my day back and the only reason I stayed for that session was because I was in so much pain. Every other session started and ended on time. No one ever made a comment or apology about the scheduling mix-up, but my printout listed each of my appointments at 8 a.m. The two times I saw the first therapist (who I later was told was the one responsible for my care) she told me I was doing the exercises the other therapist had prescribed incorrectly. In fact, they seemed to be very different exercises. When I saw the second therapist, she would correct me back to do the exercise her way again. I was seen by several different people, some who were therapists, others weren't, but there is no visible way to know who is who, so I just had to wait to see what they wanted me to do to see which exercises needed to be done with which person. The next-to-last appointment I had scheduled was with the second therapist. She looked at my chart and told me that my insurance probably wouldn't pay for more therapy and wanted to know why I hadn't had another assessment? I, of course, had no idea what she meant, as I did not understand what was needed and relied on them to tell me and to do whatever the insurance company required. She asked me if I'd like to have this be my last appointment, which I agreed to, fearing what such therapy would cost if my insurance wouldn't pay. As I checked out with the receptionist, she asked why I wasn't coming back for the next appointment, which would have been the reassessment the following Monday. I explained what happened, and she said that since I had agreed to stop therapy, I was done. I was also told that the last physical therapy appointment was at 4:30 p.m., Monday through Friday. Since I'd be going back to work after September 1 it would be impractical for me to try to resume therapy, as I'd chosen this location for its proximity to my home, not to my office. I feel the entire series of therapy was so disappointing, I was happy to leave, but I still have the pain, I don't have good feelings about physical therapy now and I am still quite confused. My insurance DID pay, and I feel that I was cheated out of the additional treatments I needed. For me to work on the exercises, it would have been helpful to have had one person each visit be the person who worked with me and helped me when my form wasn't correct, since I assume that was the point of my doing the same exercises at the therapist's room as I had been doing at home. No rhyme or reason was given for why I had been assigned such exercises. Was there a correct sequence for the exercises? I have no idea. A couple of times, I'd stop due to the pain and when someone came by to ask what was wrong, I'd tell them I was in pain. They simply walked away and commented over their shoulder that I was doing them too much, or too hard, or too far. I found these comments to not be helpful. With prescription that called for up to 12 sessions, I was only given five. The facility was clean and bright, and the people who work there seem to be happy. Some of the patients appear to be "regulars" and really seem to love the place. The building also has a gym in which several of the "regulars" had memberships. I don't want to return to my doctor for fear that I'll be prescribed physical therapy again and if this is all it is, it will not be helpful at all.

Description of Work
My orthopedist prescribed 12 treatments (2-3/week for 4-6 weeks) starting in mid-July.

They provide very high quality care and excellent specialized medicine. They know their stuff about joint repair. She had a knee repair as well as a wrist repair and they both did a great job. They are a little high quality but they are very solicited and very attentive to her care and good outcomes and they are willing to spend time to answer questions and they care. They demonstrate caring and concern.

Description of Work
My mom used Arthritis & Sports Orthopaedics & Physical Therapy for hand repair. Dr. Brittman was terrific. She saw him yesterday and she will have her surgery this coming Monday.

First visit back in 6 mos...xrays taken to compare with previous taken 9 mos. ago., discussed options...+/1; P.A. gave detailed description of recovery from total knee replacement. Dr. ordered physcial therapy, recommended visit with on staff nutritionist (self-pay) to assist weight loss progress, requested ins. company approval for euflexxa injections in knee to assist lubrication and reduce pain level; scheduled surgery with understanding that surgery could be cancelled or postponed on my part based upon level of comfort achieved with p.t. & injections. Very comfortable with this office and their operations, and dr.'s level of expertise & experience.

Description of Work
Arthritis in knee...pain,