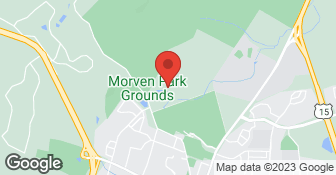 For over 30 years D&D Lawn Service, Inc has been providing landscaping and lawn service solutions, with great satisfaction, from our highly valued customers. We meet your project needs in a timely, cost effective manner, all while balancing safety and quality. We also excel in designing and constructing patios, walkways, walls, fences, and waterfalls. Our skilled workers deliver excellent results with planting, mulching, and trimming of bushes. During the winter months we have qualified staff to plow snow from both residential and commercial sites, as well as private driveways. Contact us for your annual snow removal needs!...

I contacted D and D last year about a crack in the walkway. David said he would fix it. After repeated attempts to contact him, and numerous delays in him getting back to me, I'm still waiting for the repair work to be done. The last email he sent was on 12/21/2016 and I have not heard back since: "My father had passed away and have been dealing with his estate so we did get behind on our repair work. This time of year I have one mason only on staff ( my other mason dies not work until March)and we had an emergency repair work where a wall collapsed and we have been dealing with that. I have you on the list for repair work and we will repair that once we get caught up but it will not be for a couple of weeks depending on weather conditions. I will keep u posted. Thanks, David"

Description of Work
I had my patio done a few years ago. The brick layer did an excellent job.

With so many landscapers in this area I definitely do not recommend hiring this company. I hired D & D Lawn Service to primarily plant new bushes and reseed new grass. The owner of the company, Donald Nordgren, provided me the quote. I was anxious to get the grass planted since I had mistakenly put grass killer on the lawn the summer before and would like to get my house ready to sell. I got two other quotes, and even though D&D came in higher, I was anxious to get the work done as it was the middle of April and wanted to give the grass time to grow before it got hot. One of the contractors that I received a quote from advised against planting till the fall since the weedkiller may still create some issues with new grass. but I was anxious I went with D&D since Mr Nordgren said it would not be an issue. When they provided the service, they removed an Azalea tree that I did not want removed and entirely trimmed back vines that I specifically asked not to do. It was not a big deal but I did send a note saying that they should review the requirements with customer since I worked from home to make sure that I was available if anything came up. I also voiced my concern about ;leaving dead grass and soil from the residue of the weed/grass killer that was applied the year before. I also asked that they reseed areas that did not come up as I thought it was a reasonabel request given the amount of money I spent. He agreed, but after repeated requests to see if they would do it, it took until June to reseed. None of the reseeding worked, perhaps due to the heat or being late in the season. The grass came up OK initially, but then has consequently died in many areas. I wrote him a note to let him know. and that I thought it may have been due to the dead grass and soil that was not removed.. just based on what the other landscaper told me. He proceeded to leave me an "unprofessional" voicemail where he blamed saying I cut the grass too short. I in fact cut the grass at a high setting but with all the rain the grass did grow longer as I could not cut wet grass. I never did get any advise or guidance on to care for the lawn 30 days, 60 days, 90 days after it was planted.. just bill and water alot. Bottom line is I don't know why the grass died.. neither did he.. but no excuse to act unprofessionally and to provide poor customer service. You can definitely do better than this company.. a little overpriced, average results, and poor customer service.

Terrific job! Our lawn is in great shape and looks terrific this spring.

Description of Work
Aerated and seeded our yard.

The two crew team was on time very professional and very courteous. Did a great job

Description of Work
Areated and overseeded the yard

You get what you pay for. D&D Lawn Service was not the cheapest bid I received. However, I believe they were easily the most cost-effective bid, after having worked with them and seeing the quality of their work. I am confident their work will last for many years. I would absolutely hire them again-- I plan to do so. They have earned long-term customers. I work from a home office, and was able to observe D&D employees as they worked. They were at all times professional and hard-working. They clearly take pride in the quality of their work, even when they don't think anyone is watching. David Nordgren, one of the owners (it is a family-owned business) was heavily involved in the work, but even when he wasn't around, the rest of the crew worked carefully and diligently. I originally planned on having a cinder block wall re-coated and repainted. But when they exposed the wall so they could seal it, it was clear the wall was severely compromised. David quickly worked up a new estimate, and they were able to begin the new scope of work immediately. The quality of the rebar-reinforced wall they build is such that I wouldn't be surprised if it outlasted the house. When areas of the lawn they replaced didn't germinate properly, I didn't have to raise a complaint. David proactively added more Compro, re-seeded and raked those areas, some of them twice. I had paid for a "perfect lawn," and D&D didn't stop until I had one, without me having to complain or comment. Even after I had paid for the work in full, I was surprised to see Daniel Nordgren in my yard one morning over-seeding yet again. We had a miscommunication about how I wanted the patio edge finished off. The crew was in the middle of bringing fill dirt in to raise the ground level even with the patio when I realized what they were doing and had them stop work. I called David, who was on-site quickly. When I clarified how I wanted a retaining wall and a step down, he realized that he had made an error, and they worked to make things right. I know this cost them a lot of extra work, but they didn't ask for more money, they just took care of it. I could go on. I value quality, professionalism and pride in workmanship. Being able to trust those I work with is important to me. I am willing to pay for those qualities, and I feel that the significant money I spent with D&D was well spent. I was impressed by the workmanship and professionalism of their crew, who has worked for them for many years. They are not "workers," they are professionals. I will absolutely hire these guys again.

Excellent quality of work, would highly recommend them based upon how nice they made my lawn look. Only issue was they left the back fence gate open one too many times, letting my dog run freely.

Pretty well. They were professionals...I think one of the owners came as well. asked about other services, but never heard back. My old lawn guy is back, so I haven't followed up with D&D, but they're good. It was a while back, so I don't remember many details.

Professional, ontime, cleaned up after themselves. Great attention to details

Description of Work
Aeration and overseeding

The Grounds Guys of Falls Church

No, D & D Lawn Service Inc does not offer a senior discount.

No, D & D Lawn Service Inc does not offer warranties.