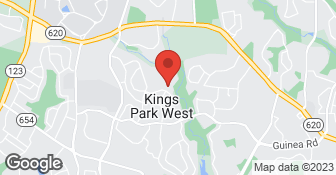 Balance Health & Fitness is a commercial and residential service, sales, and repair fitness company. We service and handle all major types of fitness related equipment. We sell commercial fitness equipment to homes, apartments, and fitness centers of all types. We also handle relocations, preventive maintenance contracts, and fitness seminars....

We have been repairing all major appliance brand's in the Northern Virginia area for well over 15 year's. We are no stranger to competition that being stated we offer the LOWEST PRICES GUARANTEED.  …

Winner of Super Service Award in 2020, 2017, 2016, 2014-2009. Free Service Call with any Complete Appliance Repair, excluding HVAC. We do not provide appliance installation. We offer same day service. Discount Appliances Repair has been in business since 1995. We specialize in appliances and HVAC repairs. We provide competitive rates on all our repair work and our diagnostic fees. We repair all makes and models of major appliance brands. We are dedicated to providing the highest quality repair work at fair prices. We hire and train the best heating, ventilation and air conditioning technicians in the industry and train them to our high standards. Our professionally trained repair technicians will be on time to your door and ready to perform the required work.  …

Expert Appliance Services provides you quick, reasonable & reliable service for your home appliances. We carry most of the parts so we try to do the job on our first visit. We work on most makes & models. We are just a call away from you. Call for our current discounts & specials. Additional phone - (703) 463 0310 & 571-471-6901. Family owned & operated. Award winning.  …

Excellent. He solved the problems

Description of Work
Treadmill was making noise and needed lubricating

I had contacted this company to service my Cybex 900a Archtrainer in my home. I needed a diagnostic done to see why it was not running. The gentleman arrived on time and looked at the machine. Gave me the reasons why it would not work. Seemed as though there were two options. One being the circuit board and the other being the plug itself. He tested the voltage readings and it was getting power to the plug assembly but it stopped when he got to the board itself. He consulted with his office and was told to remove the plug and order the part to replace it. Waited a few days and he returned with the new part. Installed it and guess what, it still didn't work! He then told me that the board is what is bad. I asked to keep the old part so my husband could see what he had replaced. He did, for a few minutes. After he had left and I called my husband, who thought that something was rotten in Denmark. He asked for the part back, stating he had to return it to Cybex to get credit for the repair!!! I, Like an idiot, gave it back to him. Then I cancelled the check I had just written to him. This check was the second I wrote to the company. It was the smaller of the two checks. Originally I paid approx $180 for diagnostic and labor. The second was just the labor of replacing the ordered part. I called Cybex directly. They agreed with me that I had been scammed because no one has to "return product to get credit" and helped me figure out what needed to be done. Sent me a new board at a lower cost! And I easily replaced it myself!!! I will never use this company again.

Description of Work
To service and repair a home owned gym equipment.