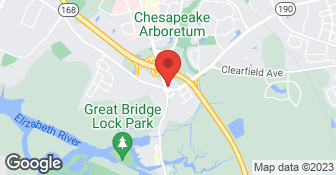 We have always enjoyed the service from Dr. Gontarek. She is very personable and takes great care of us. There are no issues with scheduling and their availability. We will continue to use them as long as we live in the area.

Description of Work
We went in for some additional frames but we have been using them for years.

On April 30, 2014 I took my doctor to her first ever eye doctor appointment with Dr. Scott Gontarek based upon the good reviews on Angie's List. She is 6 years old and was pretty nervous. I remember one review said the doctor was very good with children. The office is very clean and beautiful and the receptionist was pleasant. When the nurse pre-examination began, I requested that no cataract (eye puff) test be done on her because I knew that would rattle her. I also said I did not want any eye drops done on this first visit. The nurse said the doctor would not see her unless the eye puff test had been done. I prepped my daughter and she did pretty well although she cried a little when getting the courage to do the second eye. The nurse was emphatic and very nice. Then we went into the doctor's examination room and waited. The doctor came in very fast, talking loudly, which sort of intimidated my daughter. He didn't try to ease her anxiety or relate to her in anyway. I told him I did NOT want her to have any eye drops on this visit. He said that she must or else he had no way of knowing her exact prescription. I said okay. He quickly with no warning to her, put a gel on her eyelids. As she blinked, she began to scream and cry. I was alarmed and angry and said, "It burns?! Why didn't you tell me? I could have warned her!" He said condescendingly, "If we tell them, then they won't do it." I couldn't believe it. He'd rather treat this human being like an animal. I am very honest with my child and she is an extremely well-behaved little girl. I have 20/20 vision and my eyes have never been dilated. When I told my husband this later, he said, "You mean he didn't give her the numbing drops first?" I said no, that I didn't know numbing drops existed for dilation. My husband and I were furious. The burning lasted a good 30 seconds and my daughter who was already anxious from the cataract test was now crying and in pain and being treated like she was a brat for crying. The doctor just told her to start counting and by the time she hit 20 it wouldn't hurt anymore. It was horrible. Even as she was looking through the phoropter, he was switching the lenses so fast while asking her which one was more in focus. He was flipping the lenses so fast and asking, "A or B? A or B?" It was just ridiculously fast. No adult could've made a judgment that quickly, much less a six year old who's never done it before. The doctor just seemed hostile and irritated. I couldn't get that prescription and get out of there fast enough. We selected frames which were very expensive and ordered her glasses. I hadn't planned on such expensive frames but after what my daughter had gone through, I was getting her the glasses she chose. The saleswoman in the frames department was very nice and helpful. When the glasses arrived the next week, my husband brought her in to pick them up and have them fit. As the glasses were being fitted my husband asked my daughter if they felt okay. She said they hurt her ears and the woman fitting the glasses said, "Well her hair is in the way." My husband was sort of puzzled on how it could be the child's fault that the glasses weren't fitting correctly. He didn't push the issue and they left. When they came home and I saw my daughter, her glasses were totally crooked on her face. It was comical!! She also was still complaining that they hurt her ears. I asked about the fitting and my husband said the lady was not very helpful and blamed the fitting problems on my daughter. By this point, I was not surprised at this. I ran the glasses under hot water and twisted them until they didn't hurt her ears and sat straight on her face. Gontarek's office might be an adequate optometrist for adult patients, but I warn anyone on bringing their child there. This office is not child-friendly.

Description of Work
Performed an eye examination and gave a prescription for my six year old daughter.

Our experience has been great; all positive. I like their overall willingness to work with the patients. They are very thorough and the optometrist is really nice. From the front office to the end, everybody is very knowledgeable, nice, and easy to work with.

Description of Work
We go to Gontarek Eye Care.

The staff is very friendly and professional. Dr. Lisa listened to my explanation of what was going on adjusting to my sight after surgery and made adjustments to my new reading glasses. Both my wife and I are completely satisfied with Gontarek Eye Care.

Description of Work
I have been with Dr. Lisa for many years. This appointment was both a check up and a 1yr follow up for my cataract surgery.

Very comfortable, staff was very punctual and efficient. I was very pleased

They are great. She is one of the nicest Dr.'s I have ever talked to.

Description of Work
I went in for an annual eye exam.

Description of Work
I scheduled appointments for myself and my two daughters (ages 12 and 8).

Nothing much to tell, I located them in my network of providers for glasses. Visited their office and found them to be very friendly and knowledgeable about their products and helped me get fit for a pair that met my needs.

Description of Work
i felt as if I received a great deal on my glasses. The only CON about this facility is its location. Challenging to get out of the parking lot at a rush hour. Nice selection of glasses with options and accepted by my insurance. Looking forward to going back for my next pair.

They were good. Good place to go. The doctors took their time and did a thorough exam and very convient to where we live.

They are excellent. The staff is great. The doctors are very thorough, very sweet and very good with the kids. We have insurance but they were not astronomical. They weren't trying to sell us something that we didn't need. They are great on availability. They fit us right in. Everyone was very friendly. The eye doctors were great. We didn't need any treatment. We would absolutely use them again.

Description of Work
We use Gontarek Eye Care for our eye care for pediatrics and adults. We were there to get our girls eyes checked out.

Everyone is extremely nice. I am happy with my care and I will continue to go to Gontarek Eye Care.

Description of Work
I go to Gontarek Eye Care to see an ophthalmologist.

It is worth noting that they will take our military insurance plan. I like that they are all-inclusive, in which I can go in for an eye checkup and also order my glasses. They also have a machine so that you don't have to dilate the eyes. In terms of availability, it did take a week to get an appointment.

Description of Work
We go to Gontarek Eye Care for general eye care.

I have used Dr. Gontarek for the last 7-8 years. She has been very patient with me since I have such difficulites with my eyes. I have tried other optometrists, due to the insurance I have, but I go back to her every time even though she doesn't carry my insurance. I would rather pay full price for the exam and know I am getting a quality doctor, than use a doctor that is on my insurance plan that I do not like. I would recommend her completely.

Description of Work
Eye exam and checking for problems with eyes.

All statements concerning insurance, licenses, and bonds are informational only, and are self-reported. Since insurance, licenses and bonds can expire and can be cancelled, homeowners should always check such information for themselves.To find more licensing information for your state, visit our Find Licensing Requirements page.
General Information
Eco-Friendly Accreditations
No
Payment Options
Check, Visa, MasterCard, Discover
Senior Discount
No

Gontarek Eye Care is currently rated 4.8 overall out of 5.

No, Gontarek Eye Care does not offer eco-friendly accreditations.

No, Gontarek Eye Care does not offer a senior discount.

Are there any services Gontarek Eye Care does not offer?