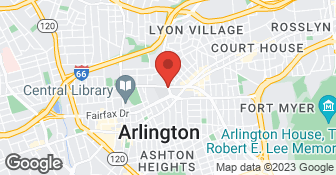 ABOUT US Established in 1983, Canine Performance is a family owned and operated canine service company known for dog training, walking, pet sitting, pet taxi services, as well as a remarkable cage-free home boarding facility. OUR MISSION Our mission is to provide the best quality care for your pet. We strive to be the most dependable and accessible service in the Northern Virginia area and will go the extra distance to give you exactly what you’re looking for in pet care. OUR THEORY Our theory behind that is simple- we’re pet owners too! Whether you need to add an extra daily dog walk or booking a last minute boarding reservation- we’ve got your tail covered!...

Lisa really knows a lot about dogs and established a good rapport with them immediately. She was also very careful to note and follow our instructions regarding their feeding, etc. When we returned they were in good spirits so we knew they were well taken care of.

Description of Work
Lisa cared for our dogs while we were out of town.

We finally had our day in court, with the judge finding Lisa guilty of not walking the dog on at least two occasions, and awarding us $150 in damages.

Everything was excellent. The best way to tell how things went is how Jackson reacts to the walkers and how he acts when I get home. It's clearly evident he's in good hands while I'm away and that is all a dog owner can ask for.

Description of Work
They visited my lab, Jackson, at home three times a day while I was away. I prefer he stay at home or with friends when he can't be at home. Too many times, kennels have mistreated him or he's come home with strange symptoms and I had enough. Canine Performance will visit him at home when I'm away for short periods of time.

Hi [removed member name]! Thank you for your fantastic review of Canine Performance! We're very happy to hear that we could offer you such piece of mind while away. As a dog owner, it's always a great feeling to know that your pup is comfortable, happy, and enjoying himself. We look forward to many more visits with Jackson in the future. As always- let us know if you or Jackson need anything!
5.0

I love Lisa, but maybe even more important - so does my dog! Lisa is wonderful with dogs and she is always professional, flexible, dependable, and kind. She will go out of her way to be helpful in any way, (she recently came over and locked the door when we forgot to lock it before leaving town). Lisa both walks and boards my dog for me, and I can't recommend her highly enough!

How is Canine Performance overall rated?

Canine Performance is currently rated 4 overall out of 5.

What days are Canine Performance open?

No, Canine Performance does not offer free project estimates.

No, Canine Performance does not offer a senior discount.

Are warranties offered by Canine Performance?

No, Canine Performance does not offer warranties.

What services does Canine Performance offer?