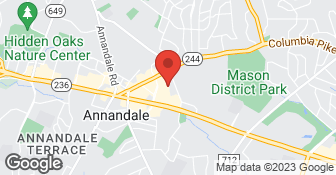 There is 1 doctor at this site. Practice specializes in orthodontics and orthognathic surgery. No fee for the initial evaluation. We are a small and friendly practice and do not believe in an "assembly line" philosophy. We are in network with most major insurances and will file primary insurance benefits for our patient. http://www.abgd.org/docs/verification.htm, http://www.aboms.org/General_Information/general_information.htm#public, http://www.americanboardortho.com/public...

Description of Work
She is our orthodontist, and we’d give her an A+ if we could.

It is virtually impossible to over emphasize our degree of satisfaction with Dr Vroom and her staff. They are exceptional in every respect. Her interaction with my daughter is both thoughtful and effective. She communicates with her patient and with me, her father. We couldn't be happier with the treatments and our interaction with everyone in the practice. I would give them an A+ across the board if the option was available.

Description of Work
Braces for my Daughter.

Dr Vroom and her staff were very pleasant and accomodating. They explained the procedures for braces and the financial impact very clearly and in detail. There were no surprises, and our son is very happy to be on the road to straight teeth!

Description of Work
We came to see Dr Vroom to get our son braces.

We consulted 4 highly recommended orthodontists about braces for my identical twins. Three of them said both kids needed palette expanders and two rounds of braces, and one of those three said he would treat them without the expanders, if I really wanted him to. Dr. Vroom did not think they needed the expanders, because they do not have cross bites. Dr. Vroom was the one who clearly saw them as two separate people, and was surprised that I thanked her for that. She was the only one who saw the differences in their mouths, and found a problem with my one daughter that required immediate attention. She did not have enough room for a permanent tooth that was about to push out the front of her gums. (The tooth was a white bulge in the gum.) We started treatment on her, just to make room for that tooth to come up instead of forward. (One of the four orthodontists didn't even bother looking in her mouth--he relied on looking at her sister.) Dr. Vroom recommended waiting to start my other daughter until more baby teeth came out. She told me other things about their mouths that no one had noticed, or bothered to tell me about, (even 2 general dentists.) We like the size of Dr. Vroom's practice. She gives my daughter focused attention. When we went for the consultation, she asked us who recommended us. I told her my friend's name, and she immediately asked how her son was by name, and asked very specific questions about him, even though he finished his braces a few years ago. It was a clear indication to me that she really knows and cares about her patients.

Description of Work
My daughter started orthodontic work in November. We go once a month, and my daughter loves going. Her sister will be starting soon. Everyone in the office is calm, friendly and competent.

Dr. Vroom has been my son's orthodontist for over a year and so far the experience has been excellent. Everything was explained clearly and the cost of the braces has been what was promised. She is always professional and friendly. Staff has been pretty good as well in handling the appointments and charges.

Description of Work
Braces. Many appointments over a year.

She is very good with kids, very friendly and very personable. She remembers details about the patients and takes the time to talk to them. The staff is also very good and all in all I have been pleased.

Providing quality dentistry in your community for over 35 years! Welcome to our practice! Drs. Andrew Sorkin and Mark Wallace are passionate about providing the highest quality dental care in a friendly and comfortable atmosphere. We take the time to get to know you and your family. Our staff prides itself on building lasting connections with our patients. We see you as a part of our extended family, and want you to look forward to each visit as much as we do. Award winning. http://www.abgd.org/docs/verification.htm, http://www.aboms.org/General_Information/general_information.htm#public, https://aaeecom.aae.org/aaeeweb/FindENDO/Find_Endodontistabe.aspx, http://www.americanboardortho.com/public, http://www.perio.org/amboard/search/index.html, http://www.prosthodontics.org/abp/locate.asp.There is 2 doctors at this site. To see if a provider is board certified, visit abgd.org.  …

Welcome to GentleCare Dentistry, the office of David L. Anthony, DDS. We are a full service dental office located in the heart of Germantown, Maryland, offering the highest quality dentistry for all ages! At GentleCare Dentistry, patient care and comfort is our main concern. We have designed our office so that you will have a warm and welcoming experience each time you visit us. We are pleased to offer state-of-the art dentistry in a modern environment Worried About Your Smile? We Can Help. We offer comprehensive dental care for all ages, whether you are looking for routine care, cosmetic improvement, or an end to chronic discomfort. Call us today for a complimentary smile consultation. Get Results Now! Give Us A Call! Care Credit Financing  …

Vroom, Dr. Katherine M. is currently rated 5 overall out of 5.

No, Vroom, Dr. Katherine M. does not offer eco-friendly accreditations.

Are there any services Vroom, Dr. Katherine M. does not offer?