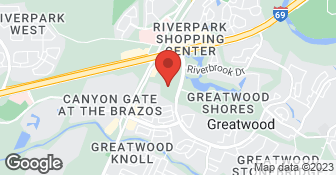 Grade A Fence Company is a family owned and operated full service residential and commercial fence contractor. We are based is Sugar Land and have a manufacturing facility in South Houston....

It was a frustrating experience. I initially got written estimates for the fence work from three companies along with a verbal estimate from a fourth company. I asked a lot of questions. I chose to use Grade A fence company because of the many positive reviews on Angies List (which have since mysteriously disappeared), their answers to my questions, and the price they quoted, which was in the middle of the four estimated prices. The work was scheduled over two days. I had been told by Rachel Flores that the company had a crew of four. I expected four people to appear early on the morning that the work was supposed to start. Instead, Rachel appeared with one person late that morning. I then learned that the crew of four was really four employees and that there are normally only one or two people working on a job, unless it is a large job. The person then proceeded to dismantle the existing fence with a saw and sledgehammer. Rachel had also told me that the existing fence posts would be removed. Instead, only two or three posts were removed and the rest were broken off at the ground. I called Rachel to ask if anyone else was going to come work on the job and one was finally pulled from another job site, when I questioned how one person was going to hold up 8 foot 2x4's and nail them to posts at the same time. I had to have the worker add concrete to some of the post holes. The existing fence had failed because of standing water on the property next to mine. The water had rotted the fence posts, causing them to break. I had specifically mentioned that when talking with Rachel about replacing the fence. I would have ended up with the same problem, had I not been following the worker around to check the work being done. I will say that the workers made rapid progress on the fence, considering the late start. They used a power auger to dig the new post holes, which sped up the process. I made the mistake of working from my home office on the morning when they were putting up the cedar pickets. I should have kept a closer eye on the work. I was surprised and unhappy when I looked outside as the fence work was being completed. The cedar pickets were a mixture of colors, from the expected light cedar color, to a medium brown, to a dark brown. They did not all look like the same type of wood. Some of the pickets had been cut off at the bottom to make them fit over the raised concrete. I had a few pickets removed so that I could chisel off the excess concrete one one side of the posts, so the pickets could be nailed and look uniform.I have included three photos with this review. The first, labeled 'Fence Estimate Photo, was the photo included in the fence estimate provided by Grade A Fence. The other two photos are views of the fence taken approximately one month after the fence was installed, after some fading. Arthur Flores, at Grade A Fence, decided to 'upgrade' the two new fence gates that I had installed. They were both supposed to be 36 inches wide. Instead, they were each built 42 inches wide. This was not an issue with one gate that was over the lawn. It was an issue with the other gate, which was over a sidewalk and which had a ground cover planting right next to it. The new gate required the removal of some of the ground cover and sidewalk edging and it was difficult to open or keep open. I ended up requesting that the gate be replaced with one 36 inches wide, as I had originally requested. I was planning on having another section of fencing replaced by Grade A fence, shortly after the original work was performed. However, Arthur and Rachel appeared to become more and more unresponsive as time went by. It took many emails, texts and phone messages to finally get an estimate for the remaining work. The estimate ended up being a higher price per foot of fencing than the original work. The reason they gave for this was that the remaining work was less than 100 feet of fencing and the original work was more than 100 feet of fence. I became so frustrated with trying to deal with them that I decided to not have the remaining fence work performed. This was a frustrating experience. I had an expectation as to the quality of work that would be performed based on the reviews of Grade A Fence that I had seen and based on the answers from Rachel Fores to my questions. That expectation was just not met. There were numerous small issues, including posts not being removed, workers not showing up when expected, many communications failures, fence pickets being of mixed colors, gates being the wrong size, and an estimate for the remaining fence work being higher than expected. I would not use this company again or recommend them. It was not all bad, but there were enough issues that I would try someone else rather than dealing with this much pain again.

Description of Work
I had approximately 170 linear feet of wooden fencing replaced. The fencing was 6 foot dog eared cedar pickets attached to three rails of treated pine on pine posts.

called 3 times and no response, incredible!!

Description of Work
called 3 times and no response, incredible!!

Hello, This is not a reflection on our organization. The profile was initially created by a previous employee with a bad phone number. As of 1/9/2018 we have gained access to this account and we are willing to respond to any inquires we may get. We would appreciate your consideration to review the previous rating you have given us. We will work hard to speak with you and give you an estimate if you are still in the market to do so. 713-907-5975
5.0

Thank you for your positive review. We are very grateful for the feedback.

We have the experience and dedication to bring your dreams to reality! Specializing in corral fence, privacy fence, chain link, and barb wire fencing, we guarantee your satisfaction, and we won’t leave until the job is done right. We pride ourselves on the quality work we provide, while delivering great customer service! Call or click to schedule a free estimate today!  …

How is Grade A Fence Company overall rated?

Grade A Fence Company is currently rated 3.7 overall out of 5.

What days are Grade A Fence Company open?

Grade A Fence Company is open:

What payment options does Grade A Fence Company provide

No, Grade A Fence Company does not offer eco-friendly accreditations.

Does Grade A Fence Company offer a senior discount?

No, Grade A Fence Company does not offer a senior discount.

Are warranties offered by Grade A Fence Company?

What services does Grade A Fence Company offer?