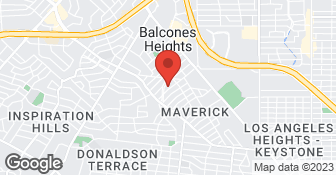 We are family owned remodeling business, we specialize in Kitchen and Bath remodels. If you can think it, we can build it. Our goal is to make your dreams come true with your next project. Our friendly staff is committed to making your project a great experience.  …

DUE TO MANUFACTURERS WARRANTY, WE ONLY INSTALL AND REPAIR FLOORING PURCHASED THROUGH OUR COMPANY. CW Floors & Lighting is a retail store with locations in both Rockwall and San Antonio. Both stores feature beautiful showrooms with a huge selection of carpet, hardwood flooring, several different types of tile, laminate, vinyl, luxury vinyl tile and plank, stone flooring and lighting Rockwall showroom hours: 10-5 M-Fri, Sat by appt only. Call (972) 771-1975 for more details. San Antonio showroom hours: 9-6 M-Fri, 9-4 Saturday. Call (210) 349-1170 for more details  …

We believe in providing great customer service and great quality work for an affordable price. We have over 20 years of combined experience in this type of work. We treat our customers with the up most respect, and gratitude because we believe that we make a customer for life.  …

Working with Jose Salas, with Salas Tile and Marble, was quite possibly one of the worst decisions my husband and I have ever made in our adult lives. We hired him to do a master bath remodel, which turned into the biggest disaster. Jose started out the first couple months as ambitious and eager to work with us, fooling us into thinking he was a skilled professional; however, we discovered just a couple months later that it was all a facade. Granted, his excuses started near the start of Covid in Spring 2020 - we gave him the benefit of a doubt and let excuse by excuse slide as we knew those were odd times. However, it wasn't until about 4 months later rolled around and he literally still had nothing to show for it (no materials, workers seemed to make no dent in the work, etc.) that we started pressing him and asking him questions about the status and end date (my sister, during this same time, had managed to almost complete build on her new house, so we knew his excuses were becoming flimsier at best). He would give more excuses as to why we had no materials, as to the slow progress, etc. We knew he was lying to us so we started calling the businesses that we knew the orders had supposedly been placed for (surprise - come to find out, he barely had placed any orders, despite us giving him money to do so!) and learned those companies either had no orders under his name, or partial orders from months ago. When Jose learned we were following up on our own, he got angry and ended up never showing back up for the job the next day, with thousands of dollars in materials and labor unaccounted for (this was about 6 months after the job started and the bathroom wasn't even close to being finished). We successfully took him to Small Claims Court about 7 months later, where the judge ruled in our favor (another surprise - he skipped the court date!). However, Jose continues to remain MIA (he never returned any calls or voicemails or texts when we confronted him about the missing money, materials, and lack of a completed bathroom). Do yourself a favor and DO NOT work with this man under any circumstances. He cannot be trusted - he took our money, lied constantly to our faces, and went missing when we attempted to hold him accountable. I wouldn't put it past him to do the same to others.

This was a disaster almost from the beginning. The first day of the job, Jose showed up by himself to begin laying tile. Quite an undertaking given the job called for a total of 2,400 square feet to be installed. He prepped and installed about 60 square feet of tile the first day and that was pretty much the highlight of our experience with him. It would take too long to document all the issues so I'll summarize: . Jose rarely worked on our job after the first day. . In most cases he would drop 1 or 2 people off and go presumably to another job. . The people he left to do the install were not skilled at laying this type of tile. . Sometimes days would go by when no one would show up to work. . He would tell us they would be there on a particular day and no one would show up. . When someone showed up, they rarely worked more than 4 or 5 hours. . The general contractor found it impossible to reach him sometimes. . The gout was applied incorrectly causing days or rework. . Massive gaps were left in corners, along baseboards, and numerous missing tile. Frustrated after of months of little progress and noticing numerous tiles that were so uneven, you literally trip over the raised edges, we found ourselves having to constantly confront Jose on the rare occasions when he would appear on site. It was always nothing but excuses and blaming others regarding the slow pace and the poor quality of the installation. Most frustrating was his constant assertion that he would complete the job in days with it was clear he had "weeks" of work left; and assuring us that the uneven tiles were minor issues. Eventually, it got to the point where he would drop his young nephew at the house to work on the job. When I finally confronted him again, he complained that he had not expected the job to so problematic and take so long. I pleaded with him to simply bring in his full crew and knock the job out in a few days. He said our job was already costing him money. He was having to pay his nephew out of his own pocket to have him onsite and he could not afford to give us a crew. I complained to the general contractor who by now was having is own issues with Jose and we were shocked to discover that he has already paid Jose for the job. Needless to say, within about a week, Jose stopped showing up altogether and our contractors said he was not returning phone calls. Our contractor hired another tile person who is working out great cleaning up Jose's mess! The sad thing is that I can count at least 30 tiles that will have to be replace and I suspect as we look closer, that number may double. If you are hiring Jose Salas for anything other than a small job, be aware he did this to us; he has probably done it before; and will probably do it again!

Description of Work
Salas Tile & Marble was hired by our general contractor as the subcontractor to install 2,400 square feet of floor tile for a major remodeling project on a home we had just purchased. We had been advised that the tile we had chosen required a highly skilled installer for two reasons: 1) The tile was manufactured in 36" X 6" planks in order to simulate wood flooring. We were advised by the distributor that of the length of the tile made installation difficult for most installers. 2) The silicon-based grout that was recommended was new to the market and required a different floating method than normally used in sand or sandless based grout applications. Salas came highly recommended by several contractors and when we were introduced he assured us he was experienced not only in installing this type and size tile, but had already done three previous installations using the new grout with no problems.