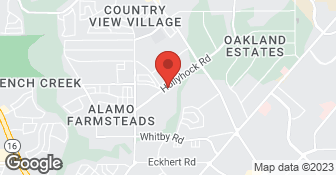 We are a full service company that includes cleaning and re-staining decks and fences. We have 9 years of experience. We also clean concrete with hot water . We do not use chemicals. We service San Antonio and some surrounding areas....

It was exceptional. Everything went great.

Description of Work
We needed a new gas stove installed safely and old one hauled off.

Very good. knowledgeable and on time

Description of Work
Cleaned deck and resealed with oil based sealant.

I liked everything about it. He was punctual and on time. He stuck to his price.

Description of Work
I used Apex Pressure Washing to pressure wash and paint my deck in the backyard, my fence in the front and a small railing area I have on the porch.

I purchased a new Whirlpool French door refrigerator from an Internet appliance dealer. Delivery was included in the price, but installation was not. No problem - surely I could find someone to install a new fridge, right? I called a handyman service that I'd used in the past, but they were booked for several days and I wanted my new refrigerator in place as soon as possible. I turned to Angie's List and found Jiffy Delivery and Installation. I called and left a message with their answering service and was promptly called by Brett Dalton. He was able to schedule a next-day install. Brett called me the next morning to let me know that he was running a little late, which was not a problem for me. He and his assistant soon arrived and got to work. They determined that they would be able to move my new fridge inside without removing either the fridge doors or my front door, which simplified the process. They quickly removed my old refrigerator and returned with the shiny new one, installed all the handles and shelves, and connected the water hose. They could have removed my old refrigerator from the premises for an additional fee, but I am trying to Craigslist it. Brett offered some tips on using my new fridge (he advised me to check the water connection in a couple to days to make sure there are no leaks). He applied the coupon offered to Angie's List members to the fee, I wrote him a check, and they were done. I don't think they were at my home for an hour. Having had appliances delivered by big-box stores in the past, I can say that I much prefer Jiffy. Brett and his assistant were professional and polite and seemed quite knowledgeable. They took care not to damage my old refrigerator, the new one, or the walls in my home as they moved those large appliances around. I would not hesitate to hire them again. Highly recommended!

They were fine. We didn’t have any complaints and they did a good job.

Description of Work
They pressure washed our house.

They did a great job. The price was reasonable. I would highly recommend them and their services to others.

Description of Work
They did pressure washing on my driveway and sidewalk.

They did a very good job. The cost was very reasonable.

Description of Work
They power washed and stained my deck.

They where very professional from the start. We had delivery issues with Sears but Jiffy checked in on the status and kept good communication with me. They rescheduled my installation with ease. I received the dishwasher first and we had that installed while we waited for the other appliances. That instalation went very smoothly and they were in and out in 30 minutes or so. They even pointed out that the last instalation of the old dishwasher had cut some corners. Once my new dishwasher was installed they showed me how to work it. When I got the rest of the appliances in they came out to do those. Since they were going to be cutting granite and they had warned me about the dust. I went and bought plastic covers from the paint section at Lowes. And I sectioned off the kitchen from the rest of the house. Me being a clean freak I am sure glad I did that. If anyone is having their countertop modified by dry sawing granite please do this. The powder from it goes everywhere. They did bring a vacuum that sucks some of it, but it was still messy. The range top and pop up fan took the longest do to the amount of cutting and getting them to fit. We had just enough room to fit them in. They did a fantastic job getting them in there. The wall oven went in smoothly with no modification needed. The microwave slash convection oven needed some custom work done. The new one I got was a bit bigger than the old one. And this one had a 220v plug instead of the standard 110v. So I called Allgood Electric to come out and change my 110v to a 220. They came out the same day I talked to them. If you ever need electrical work use them here in San Antonio. Jiffy was so nice to actually come back later that day after the electrician was done to finish installing my microwave. With every installation they checked to make sure they worked and gave a few pointers on how they worked. Jiffy did a great job overall and for their price I would use them again. And I love my new appliances!

Description of Work
they installed all my new kitchen appliances. Dishwasher, wall microwave/oven, wall oven, induction range cooktop and pop up downdraft fan. They also had to do some custom work cutting the cabinets to fit the wall microwave oven and cut the granite counter top to fitvthe cooktop and fan.

I got their referral through a sales man from another company. I couldn't find them on Angie's list. They were good. They came and they were interested in my business. They called me back right away. We set up the time, and they were there. They did the work. They tested everything. I was very pleased. I was happy with their performance. Their pricing was very good.

Description of Work
I hired Jiffy Delivery & Installation to install the air conditioner in June.

Hello were Josiah and Lawrence and were a self owned business and represent Lone Star Shine . We specialize in pressure washing and soft washing all residential and commercial work . We pressure wash driveways stonewall , porches , decks , fences and patios . We soft wash roof , gutters , solar panels , and windows as well . Were Servicing San Antonio Texas and all the metro cities around .  …

For over 25 years Rigdon, Inc has been providing homeowners the best quality cleaning and maintenance services. Our professional technicians provide fast, friendly service - and we back our work with a satisfaction or money back guarantee. Free estimates and no travel charges within our service area. Call us or email: info@rigdoninc.com.  …

We are small business owners who offer pressure washing services! Our services require excellent pressure washing and cleaning! We prep everything with care and use harmless chemicals that would not damage or destroy personal property. We will make sure the customers are completely satisfied with quotes and invoices before starting any work.  …

Apex Pressure Washing is currently rated 4.9 overall out of 5.

No, Apex Pressure Washing does not offer a senior discount.

No, Apex Pressure Washing does not offer warranties.