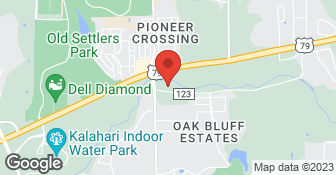 This was an absolutely horrible experience for both dogs. The poodle's grooming was OK. However, the entire chest and belly of the Havanese was scrapped and raw from razor burn. (see photos) She cried and could not sleep the entire night. I held her and made sure she did not scratch the injury. We took her to Forest Creek Animal Hospital the next morning (4/18/2014). She required 12 doses of Prednisone and Gentamicin Spray. The vet bill was $71.44. She recovered without having an infection, but suffered side effects of Prednisone. We contacted Lisa, owner of La Mia Bella Grooming and requested they pay the $71.44 vet bill and refund $51.00 of the grooming charge. She said she would call the vet and get back to me. She never called. I later went to the shop, showed her photos of the injury and again requested the refund and payment of the vet bill. She insisted the vet said she could not verify that the injury was caused by the grooming, but could be the result of scratching. Well, even if the dog scratched she did it because of the razor scrapping and we made sure she did not scratch after she came home. Lisa insisted that the dog did not leave in the condition shown on the photos and they did not cause the injury. She refused to pay the the $71.44 vet bill or refund $51.00 of the grooming charge. It is obvious from the vet bill and photos that the injury was the result of bad grooming - raw and blistered razor burns. Also, both dogs seemed traumatized when they came home. It was time for them to eat and although they were hungry, neither would eat. It was as if they could not swallow. It was several hours before they ate. The Havanese also had a raw spot on the back of her neck. The next morning, I combed out several largemats from her hair (see photo). The poodle's anal gland had not been expelled and I had to take her to the vet to have that done.

Description of Work
Groomed 2 dogs - 1 Havanese, 1 Poodle. Both dogs had been groomed by La Mia Bella in the past. Both dogs were combed and free of mats when they went in for grooming.

I love this place! Friendly, flexible, and I am always pleased. They listen to what you want and do an excellent job every time. Truly can't recommend them enough!

Description of Work
This is the only place I take my dogs. Full service grooming on one of our dogs, bath & brush on our Labrador and bath and touch-up on the 3rd. Cost above is for all 3 dogs.