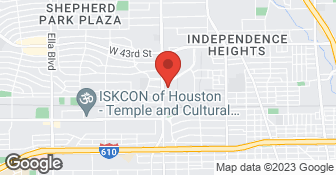 Top Rated Houston Dentist for all Dental Care. Not too long ago, a few Heights dentists realized that the traditional dental office no longer met the needs of their patients. They saw all too many times their clients complaining about having to go all over town for their child’s pediatric dentist, orthodontist or for their own specialized periodontal treatments. These dentists banded together here in Garden Oaks/Houston Heights to create a place where you can go to one office and have all of your dental needs taken care of. These dentists gathered a specialized team to take care of you, to know you, and gain the trust you need for a lifetime of healthy, fear-free, bright and white smiles. Signature Smiles offers just that - We are a high-tech, iPad wielding, Demand TV-streaming, wireless headset-wearing dental office that operates with one mission in mind: We treat everybody just how they would want to be treated. This is especially the case for kids. Were you scared of the dentist? Were you bored at the dentist? Did you need to see a specialist? Our doctors are ready to serve your entire family with baby-friendly nursery exam rooms, an Arcade with Xboxes and touch screens for the kids, and TVs for teens and adults in every room. Our cutting-edge technology includes the lowest radiation digital X-rays available, dental lasers, Invisalign, One Visit Porcelain Crowns, and Sedations to relax our nervous patients. Whether you are looking for general dentistry, cosmetic dentistry, sedation dentistry or anything in between, when you come to Signature Smiles, we’ll do the rest. Please read our Amazing reviews on Google, Yelp, and Facebook and call our office for an appointment or take a tour of our office and meet our family friendly doctors....

My continuing saga with dentists.....After Signature Smiles on Shepherd overcharged me and refused to refund my money, I had Delta Dental look into it and Delta notified them that they had to refund my $94. Today Signature told me it was only $92 (not a big difference but it's the point). I drove over to show them the letter from Delta and after they made me wait forever, they still insisted it was $92. Then they had the nerve to tell me they had been nice on my past appointments and not collected all the money from me that they could have. Which was wrong. The amounts they claimed, were charges that Delta denied and being part of Delta they have to follow Delta's guide lines as to how much they can charge. Bottom line, check you bills against your insurance and avoid Signature Smiles. Plus they were very rude.

Leading up to the appointment, we got multiple text messages and even a phone call to confirm the appointment. This is great for making sure there is no misunderstanding. The morning of the appointment (a Saturday) I got a final text confirming the 2 pm initial brace setting. We showed up about 5 minutes before, got signed in and they asked for me to pay the downpayment. We then sat and waited 30 minutes. At that time, I asked if that was normal and that it seemed too long to be waiting for this type of appointment. I asked if we should reschedule and the receptionist told me they were running behind today and she would check. Upon coming back, she told me he was next and that the doctor was working on someone. I then asked how long it would be, and if it could be another 30 minutes, even though we were next. She told me, "well, it should be within 30 minutes". Again, I asked if this was typical and if we should reschedule and she told me that it wasn't typical (my previous experiences were not on a Saturday and we had not seen the number of people in the waiting room as was there on this day), but not to reschedule since we were already here and they would see him today. It was now 42 minutes past, and we were not in. It is a 1.5hr appointment - waiting an hour just to get in made our day even longer and was not acceptable - especially as she couldn't even tell me how long it would be. While we were considering what to do, a gentleman behind me complained that it took over 45 minutes for his son to get called back. We decided to leave. Fortunately, I paid with a check and asked for it back - if I had paid with a CC, it would have already been charged. We were very disappointed. We waited 6 weeks for this appointment, they confirmed the time so that we would be on time...but once there, our time was not considered valuable to keep at least close to the appointed time or give us a heads up to the problems. Although these things happen, it would have been much easier if they had called to either cancel / reschedule or tell me upon signing in that they were so far behind so that as the client, we could determine what to do. Again, I asked to reschedule and that was not suggested by them. We will stick to them as dentists for my children but will have to find someone else for braces.

Description of Work
My son needed braces. After extensive research, we were excited to find a provider that did both dentistry and orthodontia. We scheduled and did cleanings as well to see how we liked them and got a orthodontic consultation. They gave me prices for cash payment, though they wouldn't accept or give a price for a complete pay up front price and would only allow a down payment + monthly payment. We finally made an appointment to get the braces on - it took 6 weeks for the next opening. We were also disappointed that they only have appointments for braces on Wed afternoon and Saturday, as Wednesday my son is busy and Saturdays are just cutting into weekend and family time, but we figured we would have to make it work to keep the convenience of a dentist and ortho at the same location.

Everyone was wonderful and so kid friendly. I highly recommend this place to anyone looking for a top notch pediatric dental office!

This is my first visit but will be going back. They are very good and very advanced and hi-tech, great people and good bedside manner.

Description of Work
I used Signature Smiles Dental and last appointment was two months ago.

I never saw the doctor, only the dental assistant. I left feeling very disappointed and certainly not valued as a patient. No one seemed to want to take responsibility for the mix up, and I wasted over a month with a very sensitive tooth as a result. I would not recommend this practice to anyone.

Description of Work
I have been to this dentist office 5 times. The first 3 times were for cleaning and check up visits. I saw the doctor for the first time on the 3rd visit, very briefly. Then, about a month later, one of my crowns broke off at the gum line, taking the top half of my tooth with it. I stopped by to schedule an appointment to address the issue. I showed the person manning the front desk my broken crown, and let her know that the remaining part of the tooth was sensitive to cold. She gave me the earliest available appointment, a week and a half later. When I saw the Doctor, she took an X-ray and said that I would need a root canal, a post and a new crown. I agreed to the procedure and stated that I would like some type of sedative on the day of the procedure. She said she would give me something that would not knock me out, but that would make me calm for the procedure. She told me I would need someone to drive me home afterwards. My husband arrived with me two weeks later for the procedure. I asked if he needed to stay with me or if he could come back when it was over. The person at the front desk said to give the folks in the back his cell phone number and they would call him when it was over. But when I got to the chair, the assistant informed me that the doctor scheduled to perform my procedure did not do sedatives, and that we would have to reschedule. I was surprised and disappointed to have to reschedule, and upset when they told me it would be several weeks before they could see me again. I did not want to endure the discomfort for another month just because they couldn't keep their records straight. I declined to have them do the work and will find another dentist.

Hi {removed member name}. I apologize for your experiences. We try our best to accommodate everyone and their unique needs.
5.0

It was really good. We've been using them for six months. The staff were friendly, professional and courteous. The office was clean, inviting and updated. My daughter was under two. I think at that time was a year and a half, maybe a little older. What was great about them is that it was free of charge. Any patient under two is free to clean. It's fantastic. I called around and they were, you'd spend $200. It was great that it was free. They won me over. They have a TV up on the ceiling. It was really geared towards kids. She was young so we held her down but they got it done.

Description of Work
My daughter went to see a dentist for a regular check-up.

They’re awesome. He had 4 teeth at the time, so it was short. However, the dentist was really nice and she just kind of did his first toothbrush.

Description of Work
I go to Signature Smiles Dental for pediatric dentistry.

chose signature based on pediatric dentistry reviews. staff was very friendly, punctual, the waiting area was fun as it had some activities for the kiddos. they were kind and gentle with my son and sat and talked with me about his dental habits, what we should do, etc. great experience!

I went in for a cleaning appointment and they were very gentle and friendly. The only odd thing was that I did not see the dentist I was scheduled with, but the person I saw, Dr. Yeh was very nice. I will likely return.

Hi Ms [removed member name]. This is Dr Lee. Thank you so much! Yes we have four dentists and we all specialize in different things. Dr azi and I work with the children and Dr Yeh and Dr Castelo work with the adults. I will make sure I update our website. Glad to have you on board!
5.0

My experience with them was good. The office environment, the staff members and the dentists were good. I went to them because I got them from a trusted source or a friend. Their communication skills were definitely great and their treatment was very effective.

Description of Work
I used them.

All statements concerning insurance, licenses, and bonds are informational only, and are self-reported. Since insurance, licenses and bonds can expire and can be cancelled, homeowners should always check such information for themselves.To find more licensing information for your state, visit our Find Licensing Requirements page.
General Information
Eco-Friendly Accreditations
No
Payment Options
American Express, Check, Discover, MasterCard, Visa, Financing Available
Senior Discount
No
Emergency Service
Yes

No Dhmo nor HMO.

Signature Smiles Dental is currently rated 4.6 overall out of 5.

No, Signature Smiles Dental does not offer eco-friendly accreditations.

No, Signature Smiles Dental does not offer a senior discount.

Are there any services Signature Smiles Dental does not offer?

No Dhmo nor HMO.