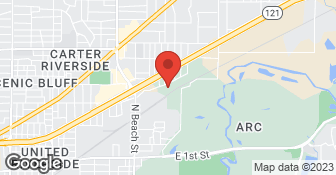 At Perez and Quinto we offer the best and reasonable estimates in the whole DFW metroplex that work for you. Perez and Quinto work 24/7 and work around our clients availability. We offer all under slab excavation. water, gas sewer trenching, Access clean out, commercial and residential tunnel, tunnel access, and broken access inside residential. Our workers have 10 years of experience in this industry and are dedicated in for filling the service requested in a timely matter and professionally for our clients satisfaction.  …

Once on site, technician was very professional repaired as promised.

I discovered the leak around 7:30 a.m. and called the Aledo Water Department who told me what was wrong and that it was my responsibility because it was in the line from the meter to my house. I called Roto Rooter at around 8:30 and they got a man out promptly around 9:15. He gave me an estimate in the range of $700 to dig to the leak which was about 2 feet deep, but he would have to cut through the roots of a tree right next to the line, and he needed to call a helper; he started digging, and the helper arrived around 10:15, and took over. They had to use a chain saw to cut the tree roots. The digging took about 2 hours, then they left for about an hour to go get the part to fix it. He quoted me in the range of $400 to fix the leak, which took another hour or so, then they cleaned up. The total price was $1148. They were very nice and seemed to do a good job. My only problem was the price. After speaking with some of my friends who have had the same sort of work done, I think the repair cost was way overpriced for 3 hours work, plus the one hour to go get the part.

Description of Work
I had a leak in the distribution line leading to my house. The leak was at the water meter, and they fixed the leak for me.

I was told the entire pipe would need to be replaced. I should have gotten another bid, but I was anxious to get my water turned back on. I regret that I spent so much money on this.

Description of Work
Replaced water pipe from meter to house.

I had a bathroom that would not drain (toilet and sink). Called them and they arrived in a timely fashion. He snaked the drain where I taken off the toilet were I have recently tried and couldn't get it unstopped. He couldn't get the drain unstopped either but he taken the time to investigate the problem. So found the direction pipe was going and went to digging. We found out the line was dummied (duct taped at the end). I hated hearing and seeing this but he was good. I've just bought this house and this was not caught by the home inspection.

Description of Work
Explained what my problem was.

The plumber, Steve, showed up as soon as he could after hours and performed the work quickly in the dark. He was able to clear our sewer line - something another plumber could not do. He went above and beyond to follow up with us the next day to make sure the City had began work on the issue in the street and even stopped by to make sure his line locates matched what the City did. I was impressed with his great customer service - he saved us money.

It was great. They did a lot and it was on a Sunday. The worst part was that the guy didn't remove his boots and it stained a rug in my kitchen. The best part was how timely they were. Only charging $45 extra to come on a Sunday for 2 hours was really reasonable. Their emergency price was only $45 which was a really good deal.

Description of Work
I had a plumbing experience with them. They unclogged two clogs in my kitchen and got a drain to run through again. They also did some drain maintenance solution.

Overall not satisfied with the service. The plummer was professional. Explain we would have a $72 dollar charge. Then looked at commode for about 10 minutes and indicaed it was stoped up. Because he spent 10 minues to tell me it was stopped up, he chared another $100 and told me he could remove the commode for another $400 dollars. Basically, I said no thank you. His total time at the house was less than 10 minutes. I have no isuse wiht the $72 dollar change, its the $100 charge, I feel was unreasonable and the fact they wanted to charge another $400 dollars to remove the commode. I called a local plumer on Tuesday and he removed and unstopped the commode, took him around 40 minues. The total charge was $193 dollars to fix this commode. He also made an adjusetment to a second commode in the house. I was totally satisfied with his work and the commode now works. I will not call Roto-Rooter again, their work may be acceptable, their rates are not in line with other plummers.0

Description of Work
Called Roto Rooter to unstop commode that would not flush.

Had roto rooter out to repair a toilet after I returned from a short business trip to find the bowl empty ... Service person arrived on time but seemed annoyed to be there - told me that the reason for my problem was that all the water had evaporated out of the bowl in two days - he seemed amazed when I told him Ii didn't believe that ... He finally replaced the 'innards' of the toilet, but did so incorrectly as the toilet is now running and phantom flushing at times ... They are coming out again on Monday to hopefully fix the problem ... I'm not going to call them again after that ...

I called this firm which I had used in prior years. The two employees who came out at 1:30 did not complete the work until 4:30; this included a trip to Home Depot which is about 3 miles from my home. The toilet works fine, however I am unhappy with the shower head repair. They sawed off several inches of the pipe before installing the new water-saver head and now it is so high I cannot comfortably adjust it. After they departed, I discovered no clean up had been done; empty box, assorted trash and black smudges on the tile counter were left. The floor had not been swept. I had to clean up the mess. As they prepared to leave, the younger worker made references to his personal marital problems. I was aghast at this unprofessional behavior. I have talked with the customer service representative at Roto-Rooter regarding my issues with this visit. The person on the phone was polite but I do not feel he was particularly concerned.

Description of Work
I had two minor problems. My shower head was old and needed replacement, it was beginning to clog up with mineral deposits and in fact part of the metal face was loose. It was the original shower head that came with my 50+ year old house! The toilet tank's ball and float mechanism was not working correctly, was no longer refilling from a flush.

Something was wrong with the faucet pipe, and they couldn’t just replace the part, so they had to replace the whole piping. They had to take the brick off the house to replace it. I would recommend them to others. The quality of their work was good, but the faucet and the pipe they put in were defective. A week after it was put in when we were on a vacation at San Antonio, my daughter was watching my dog, and she called us and told us to come home as the front room was flooded. Because it was a defective item in there, it leaked in the wall which means the water comes into my daughter’s room, and it was like four inches of water inside my front room, so we called them, they came out right away when we got back in, and they had to tear out the dry wall and replaced the piping and stuff, but they did not offer to do a cleanup or anything because the carpet in there was soaked wet, so we had to have someone professional to check all that out. They thought these things happen, but I thought it was their fault and they should have paid for that and also some of the furniture that was damaged because of the water. As far as their plumbing work, they were good, so I would recommend them to others. I would use them again in the future.

Description of Work
I used Roto-Rooter Plumbing & Drain Services to replace an outside faucet pipe for the hose that goes out of the house.