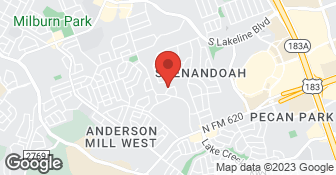 I hired Will to clean the carpet of a house we moved out of. He and the crew showed up on time and actually took care of some stains that I thought would never come out. I would definitely hire him again!

went great. carpet looked so much better when stretched and all the wrinkles were out and the carpet was clean

Description of Work
needed to clean and stretch the 20-year old carpet in my parents home after we moved them.

Saw no difference in grout after the cleaning.

It was excellent. I think they're great.

Description of Work
They cleaned 3 rooms and a hallway.

I will definitely call Will's the next time I need my carpet cleaned. They got my carpet looking like new and even removed some stains that I never thought would come out.

Excellent ! Work was done on time, and the carpet looked great afterwards, and they dried relatively quickly. I would highly recommend.

Will was responsive and did a great job in cleaning carpet in a rental house -- 3 bedrooms and hallway carpet. Worked wonders. BUT -- I was VERY disappointed that he took about 10 peaches off the front yard tree without asking permission. It was only when I walked near his truck that I noticed the peaches. And yet he still said nothing. I will not rehire him because of LACK OF HONESTLY and professionalism. Too bad ....

Description of Work
Cleaning carpet in a rental house -- 3 bedrooms and hallway carpet.

Will did a good job and conscientious in performing his work.

I thought, at the price, I should at least try to clean the carpets. However, I expected to have to have them replaced. Nope. Will did a great job, and was even flexible about my travelling schedule.

Description of Work
Cleaned some very stained carpets so the looked like new.

Will himself came to clean my carpets, he was prompt and was available very quickly (I was looking for someone immediately). It has been over a month and my carpets still look like they were freshly cleaned, all the stains are gone. He applied a stain guard as well and that seems to be working. He said it would take some hours to dry as it was damp outside but they dried rather quickly which was great as I have two dogs who didn't like sitting outside for so many hours in the rain. I will definitely be using his service again as the price was fantastic, he was great to work with, and my carpets sure do look good.

Description of Work
Deep cleaned all the carpets, with stain guard afterwards.

This was our first time engaging Will's Carpet Cleaning Services as we wanted to use someone that was local. Will was very professional, on-time and friendly. We have 3 dogs and thought the carpet was beyond gone. I will have to say that following Will's cleaning we were amazed with the outcome; carpets look amazing! We will definitely have him back in the near future. Give him a try!

Showed up on time. Cleaned my carpets. Got a spot out that I thought was permanent. I am very impressed with the service. It also made the house smell great.

Description of Work
They cleaned my carpets. Did a great job!

They did great. They were in and out before I even knew it, came super early. The carpets were really bad before they came in, and I expected very little but they did so well I was shocked!

Description of Work
Cleaned our carpets upon move-out.

Great! Responsive, arrived on time, easy to work with.

Punctual, Professional and Quality Work from Will. Recommended Highly.

Will did an awesome job and was very friendly. I would recommend his service to anyone in need of carpet cleaning.

Description of Work
Will cleaned 3 rooms for me and my Stairs.

Did a good and thorough job of cleaning all our carpets. Am completely satisfied.

Will was on time and very professional. Will took the time to see the areas that needed extra care and made sure to devote the attention necessary in those areas. I intend to keep Will's number and contact him with any future carpet care needs.

Description of Work
Will cleaned the carpet in two of my rooms.

Will and Dave showed up about an hour and a half later than originally scheduled but Will called me a few hours prior to ask if it would be alright to show-up later. I had no objection. They arrived at the new time and immediately went to work and were finished in a little over an hour. Great job, carpet looks great. I would recommend them and plan on using this service again in the future. Will gave me an estimate for cleaning the grout in our tile floors so I will be boing business with him in the near future.

Will called to let me know he was on his way and arrived exactly when he said he would. He was polite and professional and did a great job on the carpets. There were a number of spots I was sure would not come clean, but he got them out. Our carpet is about 9 years old, so keeping it looking good is not easy. I'm very pleased with the job Will did. The price was as quoted and he finished all 3 rooms within an hour. I also appreciate the fact that he was able to fit me in his schedule on very short notice. Great Job!

Description of Work
Cleaned the carpets in 3 rooms in my house.

Will and me were in contact 2 weeks in advance. He really does repair carpet very well, which is difficult to find someone who can do a great job at this. I had a little dog that "dug" under the door and destroyed the carpet. The pet odor was removed and Will provided some good advise on care, and prevention of this situation with multiple does. He is a dog owner himself and can understand habits of animals and when you add another member. Communication was great via email while I was at work and setting up this appointment. We did discuss the work necessary on the phone once. There was also a coupon for his service and Will honored that too. He traded it out for the service I really needed. He is professionally, on time, kind and courteous. I certainly would use his services again. A very neat worker too. Will was also easy going enough to work around a painter and furniture delivery in the middle of everything!

Description of Work
Repaired a torn carpet and cleaned 2 rooms of carpet in my new home. He also honors the coupons and specials on Angie's List. Do ask questions as to what he can provide, because there is a lot he can do. However, every job may take a specific amount of time and he may need that for your job.

We offer the finest in Steam Cleaning by using the best products and most powerful equipment on the market. Not only do we use the best, we strive to be the best by giving our customerst the utmost in service. We are a local small company but growing because we care about your home and carpets. We can do tile and grout as well as upholstery, we offer 100% Satisfaction Guarantee and Prompt on time service. Why wait? *Call us today at (512) 707-1102*  …

Door to Door Flooring has been servicing the Austin area since 1994. We offer a convenient, mobile system bringing hundreds of beautiful styles and colors directly to your home or office. With free expert design consultations and estimates, award winning customer service, and experienced installation craftsmen, we make it easy to have the floors of your dreams! We specialize in LVP, hardwood, laminate, carpet, tile and other hard surface installations. We service both residential and commercial needs.  …

Will's Carpet Care is currently rated 4.9 overall out of 5.

No, Will's Carpet Care does not offer eco-friendly accreditations.

No, Will's Carpet Care does not offer a senior discount.

Are there any services Will's Carpet Care does not offer?