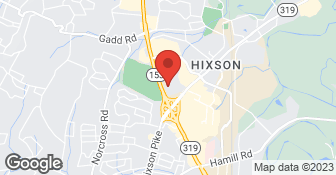 I had no problems with them. I use them all the time.

Description of Work
I bought my car from Marshal Mize Ford and I have been using them ever since.

Description of Work
For auto services and oil changes, I use the Ford dealer and it is Marshal Mize Ford.

I had a mercury mountaineer that I was getting warranty work done through ford used certified program. they were supposed to be fixing my A/C and not only did I have to end up taking it to Larry Hill to complete the job, but they had already billed Ford so I had to pay for Larry Hill to fix it eventhough I was under warranty. Then on top of that they broke my car radio and wouldn't fix it. They told me to take to a car audio place and if I could prove they broke it then they would fix it. But here is the thing each audio placed charged about 65 bucks just to diagnose it, and that's not including the price to fix it. I have been never went back. I used to get my fleet vehicles dropped off here but now I go to Larry hill ford. I have been waiting for a long time to tell someone about my experience here. came in /c not working and car radio. Working great because it was brand new. leave Marshall Miize and A/c still not fixed,but They still Billed Ford. but now Radio not working.

Description of Work
they didn't fix my A/C and broke my car audio and didn't repair it.

Very happy with the service. The estimate was right on, and they sent photos every day updating us with their progress.

Description of Work
Repaired body damage caused by someone who side swiped me. Included some painting and replacement of one door.

I had a little trouble starting my car at the mall and thought I should have my battery checked out since it was nearly three years old. I called to see what time they closed and they told me to bring it right in. When I arrived he had me wait in the waiting room for awhile since the battery had charged up while I was driving. After about ten minutes he checked it, and said that it was fine and perhaps I had been trying to start the car with the A/C running, which I had. Anyway, there was no charge. My car is running fine and I haven't had any trouble since. I always take my car to Mize Ford for service and have been extremely happy with their service! They always do little and quot;extrasand quot; and go the extra mile to ensure that you are a happy customer. I love, love, love Marshall Mize service! By the way, this wasn't the first time that they haven't charged me when I had them look at something on my car....

Description of Work
Checked my battery

I think their prices are reasonable. Their customer service stands out; we have been using the same service writer for decades. I never have to take my car back for a second repair on the same item. They always follow up a service call to make sure I am happy.

Description of Work
I use Marshal Mize Ford for general auto service.

We turned our car in the Marshall Mize and they took care of the rest including setting up repair with Cadillac, taking our car to the Cadillac service. We pick our vechicle up a Marshall Mize and all is done. We purchased our car from Marshall Mize and Dan Bastenagel and his sales staff were/are excellent to work with. We had a bit of a rough start but Dan took care of everything and we are as happy as we can be. The credit dept. was also tremendous to us. We went into this dealership know we don't have triple A credit, we were honest and open with the sales staff and we bought our Cadillac which still has some mfgr. warranty as well as our extended warranty. They did not try to sell us something we didn't want or need. The price we paid was very acceptable or trade in value was more than reasonable and the over all experience was terrific. Dan even put up with me getting upset when I shouldn't have. He more than took care of us. It's no wonder why they were given a 2010 SEAL OF SATISFACTION AWARD. They more than earned it. We look forward to buying our next car from Marshall Mize as well.

Description of Work
I have an extended warranty on my vechile. My cost was/is nothing, even for the rental car it too is covered under my warranty. Needed the driver seat fixed, new motor in the seat. It is a Cadillac therefore Marshall Mize doesn't do the work Cadillac does. I wish Marshall Mize did do the work as the Service Dept. Robert, Adam and the rest of the service staff are top drawer. They are very knowledgeable folks, caring, and interested in taking good care of you right down to the rental car if needed.

Their service was great. They did great work. The estimate was perfect. The time frame was exceptionally great.

Description of Work
They performed some auto body work on my vehicle.

Was told if I dropped vehicle off early the next day, it could be ready the same afternoon. Next morning, I was at the shop when they opened. A young man wrote up paper work, took my keys and I left.He said I could call around noon to check status. At noon I called, was told they had not started work on my vehicle yet. I called back a couple of hours later, they still had not started. I called again after I got off work, and was told they did not have the right part, it would be the next day before they could work on it. The second day I called around noon, they had not started. I talked to the shop manager who said they did not get to my vehicle because the guy that wrote up the paper work had gone home sick. When I questioned how they could run a dealership shop, if everything seemed to rely on one guy who had to leave work sick? Surely they have a contingency plan. The shop manager assured that it would be ready the next day. On day three I call about noon they said it was ready. I went by to pick it up when I got off work, only to be told they had lost my key! The shop manager said I could wait until they found the key, but I told him I had a spare with me. I paid and was leaving when I was told I could come back and pick up the key when they found it or they could mail it to me. I told him to mail it, and that I would not be back to their shop again. However that turned out not to be the case. A few days pasted and I got and and quot;Marshal Mizeand quot; envelop in the mail, with the bottom ripped open and no key. I again called the shop manager, who said if I would come by they would make me a new copy of my key. So I did go back only to go straight to the Parts Dept where a key was made. I have not been back and I could not recommend anyone to do so. Their disorganization and lies are unnecessary and irresponsible way of doing business.

They were great. They did great work, the estimate was just perfect, and the time in which they said it would be done was exceptional. I would definitely use them again.

Description of Work
Marshall Mize Ford did some body work on my car.

Tire World and Auto Service, located 245 Signal Mountain Rd Chattanooga, TN, is known for fairness and honesty, taking care of customers since 1971. Our goal is provide our customers with quality tires and service at an affordable and fair price, all in a timely fashion. From humble beginnings as a gas station, we have grown into a full service automotive shop providing a wide variety of tires and automotive services for our customers within Chattanooga and surrounding areas. Business hours are Mon-Fri: 7:30am-5pm, and we are closed on Saturday and Sunday. Contact us online or call us at (423) 266-5237.  …

All statements concerning insurance, licenses, and bonds are informational only, and are self-reported. Since insurance, licenses and bonds can expire and can be cancelled, homeowners should always check such information for themselves.To find more licensing information for your state, visit our Find Licensing Requirements page.
General Information
Eco-Friendly Accreditations
No
Payment Options
Check, Visa, MasterCard, American Express, Discover
Senior Discount
No

MARSHAL MIZE FORD is currently rated 4.3 overall out of 5.

No, MARSHAL MIZE FORD does not offer eco-friendly accreditations.

No, MARSHAL MIZE FORD does not offer a senior discount.