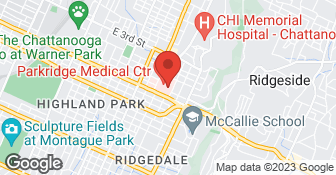 To see if this provider is board certified go to www.abms.org. There is 1 doctor at this site. Surgery is not performed at this site....

Horrible experience from beginning to end. I was given false information, yelled at, and had to wait in the office sometimes for 3 hours. Very incompetent Dr. and staff. Consider other Doctors...there are pleanty of good ones out there!

Description of Work
I had chronic knee pain in both knees. My primary Dr. sent me to Dr. Dyer. After the MRI results he consulted with me, and told me I needed immediate surgery on both knees. I told him I needed to think about this. He called me at home 3 days later...and pressured me into doing one knee immediately. There were no options, or before surgery suggestions. He even urged me to get off of "Health Spring" so that it would be cheaper...which I did not do. He advised me that I needed the meniscus on my knees repaired, and after surgery I needed to be on crutches for 8-10 weeks. (Non-weight bearing). I should have gotten a second opinion, because all the information he gave me was incorrect! After scoping the left knee, I went back to my appt. They removed 3 huge metal staples....from a stool in the hallway. Their office was a mess...they were remodeling. The staples were so large it looked like it came from a staple gun. When he consulted with me, I answered a question he asked me truthfully. He YELLED at me, and reduced me to tears! I left there sobbing I was so upset. While writing the check at the desk the clerk told me that happened often...that I wasn't the only one. My next visit I insisted a Male friend of mine to go in with me...hoping he would treat me better...shockingly it made a difference. He was quite polite to me that time. After being on crutches several weeks, my right knee was hurting badly from taking all the weight on the crutches. I started to listen to friends that were nurses, and they told me I needed to start walking on it. It was very painful at first but I did it. When my next appointment came around I started getting ready, but dreaded going so much because I knew he would yell at me again. I called and cancelled my appointment. When the receptionist asked why I told her that I was just plain not coming back to him. (I was out shopping, walking on the leg he told me to not walk on) when 15 minutes later he called me himself and wanted to know why I wasn't coming back. I told him I was tired of false information, and being yelled at, and that would be it for me with him. He begged me to come back. I have since found an excellent surgeon that has repaired both knees 2 months apart after he tried therapy, cortisone shots, and gave me other options. He did an excellent job, I walked out of the surgery center on both feet both times. He made such small incisions that there wasn't even a stitch let alone a large metal staple. Dr. Dyer made my life very hard, and it usually took about 2-3 hours to get to you for each appt. I was severly depressed over this horrible surgery and the way I was treated. Everyone in his office is older, and it takes forever to get through the waiting room, exrays, exams, etc. If you are even considering this Dr. you need to think twice. There are much younger, competant, polite orthopedic Doctors out there!