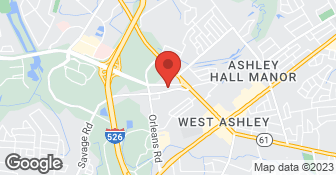 Dr. Belinda Liles Cordray has been improving smiles across Charleston for over 25 years. Let her and her staff help you with all of your dental and cosmetic needs....

Dr Cordray is pleasant, easy to talk to, thorough in her examinations and explanations of procedures required, and gentle with the tissues so there is no residual soreness after the prodedure. In subsequent visits, she fixed the fillings and replaced both crowns, one damaged by bruxism. She thoroughly explained teeth-grinding and tmj pain and what I must do about it to prevent further damage.Her staff is pleasant, friendly, and efficient. Going to this dentist doesn't bring on any anxiety or dread. I'm glad I 'found' her and would recommend her.

Description of Work
The first visit was for a general checkup. Needed 2 crown replacements, two filling replacements. The fillings were cracked. One crown had decay behind it and the other was damaged due to bruxism (teeth grinding).

The office staff and Dr. Cordray are wonderful, very professional and great to work with. I will be using them for all my dental needs in the future.

Description of Work
Excellent care and high quality work. I needed two crowns to save the teeth and they fit perfectly.

Always a pleasure. Would encourage my good friend to be a tad more patient with assistants. Thats only an observation, but sometimes it comes accross as a bit too tough. High standards, however, are tough to maintain. So there is lots of room for mis-perception on my part. A trusted dentist and staff.

Description of Work
Diagnosis of infection and treatment plan. Re glue of loose crown General Cleaning and Wellness

My first impression of Dr. Cordray was pretty good. She was attentive and explained to me the plan of work based on the X-rays. The staff was also friendly. However, after my 3rd visit I decided that I wasn?t going back. Dr. Cordray did the filling but left a big gap between the teeth which trapped food. When I complained about that during the next visit, she just added some material to the side of the filling. About 2 weeks after that the added piece fell off. On my second trip she replaced a filling in the front tooth. She explained that based on the X-rays, that filling needed to be replaced. She also suggested to replace 4-6 other fillings justifying it by the X-ray and supposedly visible decay. The dentist that I visited later found only one problematic filling, so my suspicion is that Dr. Cordray offered to replace the fillings that did not need replacement. Now, the front tooth. She drilled so much on the inside of the front tooth that the bottom of it became almost transparent. Additionally, the excessive polishing/buffing changed my bite putting pressure on the nearby crown and I?m still getting used to it. The color of the filling was chosen incorrectly and I had to return to fix that, as well as the transparent bottom of the tooth. I want to give credit to Dr. Cordray, she fixed these problems free of charge, because technically, that was her fault. The front tooth where she did replace the filling (and had to redo her own work) turned yellow a few months later. My current dentist only needed to buff it to return to the white color. That makes me think that Dr. Cordray was in a hurry and didn?t finish the work properly. Finally, the cost. Our insurance covered the work but the final cost was higher than at my current dentist?s by a factor of 10. For instance, the first exam cost about $120 at Dr. Cordray?s office but it was only $13 at my current dentist. That?s with exact same insurance plan. This may probably be explained by the fact that Dr. Cordray is not part of the network covered by Blue-Cross-Blue-Shield. She didn?t however let us know that her office was not part of the network. My overall experience with this dentist was negative. There were too many problems and omissions in work that made me cancel my future appointments and switch to another dentist. The cost was higher with our insurance than at our current dentist.

Description of Work
The filling was broken and I needed a replacement filling.

We were talking to some friends and they saw the doctor there and they were real happy. Her bedside manner and communication are perfect.

Description of Work
We have used Dr Belinda Cordray at Charleston Dental Associates.

Comfortable, friendly and professional. We have found our new dentist.

The people were friendly and helpful.

Description of Work
I had a chipped tooth and they got me in the next day.

Let me start by saying I have an irrational fear of the dentist. But things could not have gone better. I called in the AM, and they got me in the same afternoon. The office is very nice, and the staff are even nicer. They were able to re-bond my tooth, and it looks 100x better than it did even before I chipped it. Dr. Cordray is fantastic, and really makes you feel at ease…not easy to do with me. I will be using them moving forward for any dental needs. Highly recommend!!

Description of Work
I had chipped a bond on one of my front teeth, and needed someone to look at it quickly. I had recently moved to the West Ashley area, and needed a new dentist in the area.

The staff and dentist are very professional and friendly. My mother and I were very pleased with the service and care provided by them. They communicated everything with us and explained the procedures before they were starting doing them. They took their time and did not rush anything. If I had questions the answers were through and easy to understand. I don't like dentists but my experience here was one that will have me going back.

Description of Work
New patient appointment and cleaning. Interaction with provider was a positive experience,

Everyone was helpful. An examination was done. I was referred to an endodontist for a root canal, and then given a return appointment for a crown preparation. Both the dentist office and the endodontist's office called to check on me after procedures.

Description of Work
I was having pain from a cracked molar. I called this practice as I was looking for a new dentist, and they took me the same day I called.

All statements concerning insurance, licenses, and bonds are informational only, and are self-reported. Since insurance, licenses and bonds can expire and can be cancelled, homeowners should always check such information for themselves.To find more licensing information for your state, visit our Find Licensing Requirements page.
General Information
Eco-Friendly Accreditations
No
Payment Options
Check, Visa, MasterCard, American Express, Financing Available
Senior Discount
No

Charleston Dental Associates is currently rated 4.9 overall out of 5.

No, Charleston Dental Associates does not offer eco-friendly accreditations.

No, Charleston Dental Associates does not offer a senior discount.