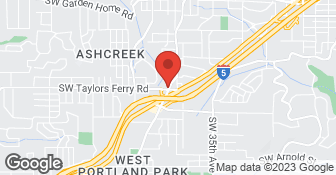 COST IS DETERMINED BY THE JOB....

Mackins was one of the shops suggested by my insurance company after I backed my car into a large tree branch, smashing the rear window and damaging sheet metal as well. I could not have had better service anywhere else. Totally professional and friendly people, high quality work, all done in a timely fashion. The repaired sheet metal needed to be painted to blend and match, of course. After completion, you could not tell that anything had ever happened. Of the $2500 invoice, my deductible was $500 and the full price seems higher than I might have thought but is probably competitive. Not my area of expertise, that's for sure.

they did a great job. As it was an old truck, they had to go through some effort to find the right part. when they could not find it, they repaired it as it was ... at a larger expense. Between Mackin and I talking to the neighbor's insurance carrier, we were able to convince them to go through with the job. Otherwise the insurance carrier was intending to send me a check for about half what the truck was worth ($1500 vs $3000). The truck looked near new again with Macklin's work. I ended up donating the truck to the Human Society a couple years later as I rarely drove it. They were happy to have it.

Description of Work
my 1989 truck had a large dent in a rear fender caused by my neighbor backing into it.

It went well. They did good. I would recommend them. The people were good and very professional. We didn't shop because it was covered by the other person's insurance company. I would use them again but I would shop.

Description of Work
We used Mackin's Capitol Auto Body for some body work for somebody that hit our car. We were rear ended so it was bumper, rear tail gate and some light assembly.

The people with whom we worked were just so very accomodating. We were always kept in the loop as to how the work was progressing. They handled all the interface regarding the insurance company. I cannot say enough regarding the care that Mackins took to make our temporary loss of our vehicle. They provided aid in getting a rental car which was right at the shop when we dropped the car off for repair. I would recommend Mackins on Capital Highway to all my friends and family because the people are great and the workmanship is awesome!

Description of Work
We had severe broken chain damage to the front and side panels of our Forrester. The inside of the wheel wells were gone. The fenders looked like they had been chewed . The skirting along both the driver and passenger doors was also chewed. Almost all of the front quarter of the car was replaced and painted to blend with the rest of the car. The work was superb.

My pickup truck was dented while parked in front of my house while I was not home. The person who hit my car was considerate enough to post a note on my door with their contact information. I arranged to have nearby Mackins Capitol Autobody fix the dent. They did so and matched the current paint color very well. The Estimator / autobody contact was very helpful in updating me with the progress of the repair. They also handled the $$ payments with the insurance company.

Description of Work
fix a dent to the side panel on a pickup truck, and match the current paint color of the vehicle.

I was satisfied with their service. The price was good, they were prompt and did a good job. I would recommend them to others.

Description of Work
The fixed two small jobs for me on my car.

Someone backed into my VW Passat car and not only cracked my lights and front bumper but on further inspection the inside support for the radiator was cracked. I had taken my car to the VW dealership not knowing who could fix my car. They recommended Mackin's and called Scott Hepner in marketing to come over look at my car and talk to me. I knew nothing of body shops or how to choose. Scott explained everything to me, took all the insurance info --luckily this was all going on the person's insurance who hit me!!!--and told me to pick a place for it to go. I chose the Capitol Hiway location because of the proximity to my house and knowing I could take the bus to pick up my car. Scott even drove me home from the VW place and got my car towed over to the shop. Billy Wu at Capitol Highway Mackins kept in constant contact with me and the insurance company. They have a great receptionist, Shannon and even and answering service that relays messages when the shop is closed or is the weekend. I was very satisfied with the work. I got my car back spotless inside--unbelievable as it was full of dog hair and mud from the dog feet!!!

Description of Work
They fixed the cracked bumper and the headights. When I got home I saw the lens to the fog lights was still broken--the insurance guy didn't write that down. I called them and they called the insurance company and now I am going to bring it in to get that fixed too with no problem. They totally dealt with the other person's insurance company. I didn't have to do a thing or haggle with them to make sure it got fixed right. In fact, the insurance adjuster was kind of a jerk and he didn't even look at my car properly. He didn't look under the hood so they had to call him back. The total damage was $2435.

It stared out well. The estimate was about what I expected and they were able to do it when I wanted them to. I brought it in the scheduled morning and expected it to be ready early afternoon (that's when I was told it would be ready). After hearing nothing by mid-afternoon, I called and was told I'd be called back in a few minutes. After an hour, I called back. It turns out they got the wrong part and couldn't tell until they tried to install it. Well, I can't blame them if the parts supplier sent the wrong part, but I can blame them for not checking it before painting it and trying to install it. In any case, they said they now had the right part, would paint it but couldn't put it on until the paint dried which would be after they closed. I agreed to leave it there so that I could pick it up early the next morning. I was told they'd paint it that afternoon and it would be quick to install it in the morning. But again, morning came and went with no call. When I called back, they hadn't even begun painting it yet. So I ended up not getting it until late afternoon, which caused me further problems. When it was finally done, the work looked fine and the cost was as expected. But the whole process left me irritated to the point where I won't use them again.

Description of Work
Replaced some trim on the side of my car that started to come off.

After the collision, I drove the car directly to their shop on Capital Hwy. From that point on, they did everything for me. Got me to my office, offered to get me a rental car and have it delivered by their staff, dealt with both insurance companies, repaired my car within the 7 day window they promised, and the car was detailed inside and out with professional quality. It was a great experience. They go the extra mile.

Description of Work
Repaired my 2006 Acura TL with Right Rear Quarter panel damage, and rear axle was pushed out of place from the collision. They did body work, paint work, and alignment of the rear axle, along with a full 4 wheel alignment.