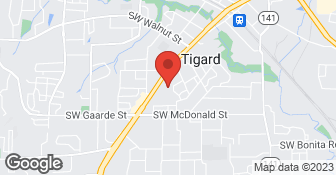 Full service veterinary care, friendly, compassionate staff and doctors with affordable rates. Tuesday vaccine value day, complete in house diagnostic and blood chemistry, orthopedic surgery, laser surgery for less pain and faster healing, dental cleaning, with or w/out anesthesia, digital x-rays for precise identification of serious conditions. Call for more information 503-670-9707 or visit us on the web at www.CommunityPetHosp.com. There is a lot of information about pet health, prevention and how to address different issues. Check out the many videos also available. You can also access your pet's health records as well....

I initially started going to Community Pet Hospital because their prices are very good and their walk in facilities. You don't have to make appointments except for surgery and those kinds of things. They give excellent care. You can tell that the staff really likes animals. They're very thorough and give you all the details and information that you need to know to make decisions for your pet's health care. I've just been so happy with them.

Description of Work
I used Community Pet Hospital for veterinarian to treat my dog's ear infection. I've been going to them for about five years now.

They are excellent. We really liked the price and their service is walk in so we don't have to worry about appointments. We were pleased with them.

Description of Work
We used Community Pet Hospital last week for my cat.

At first we were pretty impressed with Community Pet Hospital upon calling to get prices ($750 for both cats), and dropping the cats off for their surgery. Unfortunately that quickly went downhill after picking up our cats the day after their surgery. We were given very brief instructions on what to watch out for, as well as some medication and litter for the cats. We followed the instructions of keeping the cats in a small isolated room, and doing our best to keep them inactive. Despite following these instructions, the glue 'stitches' had come off on multiple areas on both cats just the very next day. We took both cats back in right away to get the incisions re-glued. They decided to bandage both cats paws, and give them both e-Collars to ensure they did not chew through the glue, as well as sending us home with some antibiotics. This second visit cost us $136, on top of the $750 we paid just two days prior. We put the E-Collars on the cats, and took them home. Within 30 minutes of being home, both cats had shaken one of the bandages right off their paws. (They charged us $35 per cat just to put the bandages on in the first place, and they only stayed on for 30 minutes!) Fast forward another 2 days, and once again the glue holding the wound closed is nowhere to be seen despite being confined in a small bathroom the entire time AND wearing e-collars. When we called AGAIN to let them know the glue came loose they just told us to come in again to get it re-glued. We were charged about $20 to get these glued for the THIRD time in less than a week. After having a family friend take a look at the cats we were told that it looked like there was some laser burns on our female cats paws, and we were advised to take both cats in to another vet to get checked out, as the quality of the surgery and glue sutures was unacceptable. If I would have known a week ago that I would need to be bringing my cats back in every other day to repeatedly fix the same shoddy glue sutures I would have steered clear of Community Pet Hospital and taken my cats somewhere that they would be cared for appropriately.

Description of Work
Pets - exams and vaccinations. Professional and kind from the front desk to the vet, Dr. Bruce Johnson, and remarkably reasonable fees. Any suggestions were given in an informative way and without using guilt.

It went excellently. My husband was particularly impressed that Dr. Long explained everything to him very, very thoroughly. Price was low for the area and they got us in the same day for that first visit. In addition to the good in-office communication, their office and Dr. Long also called a couple times to explain things.

Description of Work
We just moved to the area and my husband chose this vet, Dr. Long at Community Pet Clinic, after researching on Angie's List. We took our cat, Fluffy, in due to a recurrence of a tumor on the edge of his ear which had had prior surgery. My husband and Fluffy actually saw Dr. Long two times. The first time, Dr. Long did blood work, exams, radiographs and the bill was $269. The second visit involved the actual surgery and leaving Fluffy there with premeds, anesthesia, mass removal, IV's, etc. This visit was $469.

Their prices and their services are pretty good. It's basically a walk in and you don't have to take prior appointments. Both the times I have been there was without appointments and in a very short period of time. Among the number of vets I have seen, they were as good as others. I would rate them high overall. I would definitely use them in the future.

Description of Work
I take my pets to Community Pet Clinic/Companion Pet Clinic. The last time I had been to them was in April this year and had taken my dog and my cat.

They are real efficient because I can just walk in. There isn't anything that they are totally outstanding in but they aren't weak either. It is very convenient just to be able to go in and get what I need to get done. Their prices are what I find in the community. I will continue to use them.

Description of Work
I used Community Pet Clinic for a shot.

Our dog is older and small so we were worried about the procedure. However, the vet did a good job and there was no difficulty. The price was reasonable. The facility is not fancy, but it is clean and servicable.

Overall,I think Community does a pretty good job for the price. They are cheaper than most vets we've used. My biggest issue with them is that there is always a wait. The waiting room will be empty, and you'll think, great, this should only take about 20 minutes. Wrong. You'll wait 5 minutes in the waiting room, and then 25 minutes in the exam room, even when the place looks empty. That may not seem like a long time, but when you have a cat freaking out on you, every minute feels like an hour. I love Dr. Long. He's got a great bedside manner. Some of the others (both clerical and vets) seem pretty detached and not very empathetic, at least compared to vets we've used in the past. The good thing about them is that they don't hype a lot of expensive drugs, vaccines, tests, etc. Would recommend them to others.

Description of Work
Under the weather cat; listless, vomiting,etc

Telephoned after kitten fell. They were able to get me in right away. Very sympathetic and obviously love animals.

Description of Work
Kitten shots and x-rays/diagnosis/treatment for one of the kittens (she had taken a bad fall). The folks there now are great.

They handled our situation with great compassion. They never made us feel that it was the wrong thing to do. They tried several ideas to rule out cancer but in the end the cat was suffering and they were very nice and caring. We even received a postcard in the mail a week later that said, "We're sorry for your lose." That was nice to receive.

Description of Work
Our cat had cancer and we had to put him to rest.

WHEN I FIRST HAD A QUESTION, I CONTACTED COMPANION PET CLINIC BY PHONE AND WAS TREATED WELL FROM THE START. ALTHOUGH IT IS A WALK-IN CLINIC, THE WAIT WAS VERY SHORT. THE RECEPTIONIST WAS WELCOMING AND UNDERSTANDING OF MY PUPPY'S PERSONALITY! THE VETERINARIAN DID A GOOD EXAM AND TREATED ME WITH RESPECT. OVERALL, I THINK THE CLINIC IS GREAT FOR THE FRIENDLY SERVICE AND THE PRICE.

Description of Work
VETERINARIAN EXAMINED MY DOG AFTER I HAD QUESTIONS ABOUT HER HEALTH. AFTER A GOOD DIAGNOSIS, THE VETERINARIAN GAVE SEVERAL OPTIONS IN TREATING MY DOG.

Community Pet Hospital is currently rated 4.5 overall out of 5.

No, Community Pet Hospital does not offer a senior discount.

No, Community Pet Hospital does not offer warranties.

Are there any services Community Pet Hospital does not offer?