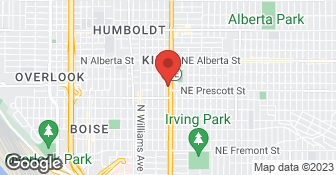 we have over 40 years brake and exhaust experience and have been in the same location for over 25 years...

I had such high hopes for this place. The owner seemed very nice when I brought my partner's car in. It had been thumping around tight turns and maneuvers for a couple of months and we needed it fixed for an upcoming trip out of state. I dropped the car off and described the problem. He called me a couple of hours later and said he couldn't replicate the problem. I told him that sometimes it only "acted up" when the car was warm, so we made a plan for me to come over, drive it around the neighborhood to warm it up and come back. After about five miles worth of donuts around my neighborhood, the problem appeared. I drove it quickly back to him and told him what I'd done to replicate the problem. He jumped in the car and I did a couple of donuts in his parking lot. Voila! He seemed to know EXACTLY what the problem was. He put the car up on the lift and showed us where there was some play in front carrier bearing. We picked up the car up a couple of days before our trip, but about halfway to our destination, the thumping started again, this time accompanied with a smell I was not familiar with. We delayed our trip in Walla Walla to learn (from two different mechanics) that it was not at all the carrier b, but a center differential problem. And now, the work that DID get done apparently wasn't sealed/machined properly so was leaking transmission fluid when the car got warm. We phoned the owner of Barker's and explained the problem. He said "well, I fixed the problem of the car knocking at high speeds." COME AGAIN?? I thought maybe he had me confused with someone else, so I reminded him that I'd done donuts in the neighborhood and then in his parking lot. He replied, deadpan, "I fixed the problem that you told me about...of a knocking at high speeds. I took it out on the freeway and there was no knocking after the repairs." I said "there was NEVER knocking at high speeds, so I don't know why you would have to fix it. The repair was for a thumping at low speed in tight turns." His reply: "What can I do to help you? I fixed the problem you asked me to fix...a knocking at high speeds." Whoa! Am I losing my mind? Because this was never a problem and there was never ANY mention of high speeds or freeway problems AND my partner was my witness, I think not. He refused to admit any responsibility or misunderstanding or misfiring of synapses. When my partner took the car back to at least get the seal leak fixed, he said he'd have to charge her for that too. Um, no. I'm not sure what's going on here, but buyer beware. This guy may be losing his memory and, therefore, his ability to fix things properly. My biggest regret is not having asked for a written estimate that included a narrative of the problem. NEVER AGAIN.

Description of Work
Attempted to fix a thumping in my front end around tight turns.

Because we are new to Portland and still finding our way around, we'd taken the Volvo to the local dealership when we heard an exhaust leak. The dealership wanted to replace the whole system. I checked Angie's list and found Barker Muffler, and called. Jerry told me right away that I probably didn't need the whole system, and I arranged to visit the next day. As soon as I arrived he put the car on the lift, and within 10 minutes of my arrival gave me 2 options for repair: another patch weld, or a new pipe. I chose the new pipe. Barker's has a warm, comfortable waiting area, and Jerry asked if the temperature was all right before leaving to do the job. After completing the installation Jerry invited me to tour my exhaust sytem. I will use Barker's Muffler for any future exhaust jobs on any of my cars.

Description of Work
Jerry fabricated and installed exhaust pipe between the catalytic converter and muffler to replace a piece rusted and previously repaired on my 1998 Volvo station wagon. He inspected the entire exhaust system, evaluated its condition and advised me of its next possible areas of weakness and earlier repairs, and invited me to inspect it as well. He showed me the old and new parts and repaired the car while I waited in under an hour.

Took the motorhome in on Monday and the owner raised it up and inspected the exhaust and told me what was needed, which was pretty obvious. The catalytic converter was missing, the muffler had lots of holes and so did the tail pipe. I asked that the rear brakes be inspected since I recently purchased the vehicle and didn't know when they were last serviced (the front brakes were obviously brand new). I also asked that the wheel bearings be inspected since I didn't know when they were last repacked either. The owner also noticed that none of the suspension joints had any grease fittings installed and suggested that those be installed and a lube job done, which I agreed (I hadn't noticed that the grease fittings were missing). The estimate was for the above and was for $610. The final tab came to $613 and included repacking the bearings. They said the rear brakes were fine and didn't need servicing, they just adjusted the emergency brake cable. Had to leave the vehicle overnight so they could make sure they would have enough time to get all the parts for a 1984 Toyota, which I had no problem with. I'm a hobby mechanic and at no time did they suggest any work be done that the vehicle didn't need. The only thing they suggested that was in addition to what I asked for were the grease fittings, but once he pointed that out I realized that it needed that too (he did leave that decision to me).

Excellent. If you have muffler or brake work, they're your shop. Honest, competent and very reasonably priced.

Description of Work
I took my 2005 Scion xa to Jerry and company thinking that it needed a new set of front brake pads. Barker was my 2nd call - the first had been to Les Schwab. Les quoted me $220 for replacing the front pads and Barker quoted me $110. Anyhow, Jerry called me 45 minutes after I dropped it off and said that there was actually no need for new pads. I had apparently run over a hanger or something that sounded like the nails on a chalkboard sound that brake sensors make. While they easily could've replaced the pads and charged me, he charged me nothing at all (even thought they put the car up on the lift and inspected it). This is an honest company. And they replaced a muffler for me in the past and did it flawlessly.

Job was performed very quickly for the price quoted. Total time spent was a half hour. Quality of the work appeared to be good.

Description of Work
Muffler had rusted out. New muffler was welded in place.

My daughter's 88 Volvo sedan had a cracked header pipe and recently lost a tail pipe. Our regular mechanic gave us an estimate of over $ 250.00 to replace the header pipe. After searching on Angie's List, I came across Barker Muffler and read one of the readers comments who took his Volvo to Barker Muffler and had the header pipe welded. I made an appointment and was able to go the next day. Barker Muffler is great. He found that we also needed a gasket and went through a lot of trouble to find the right one. His work was excellent and the price was so reasonable. I'll never go anywhere else for my muffler needs. The car passed DEQ without any problems.

Bill the mechanic inspected the exhaust system and announced that a section of pipe need to be replaced as I anticipated. The pipe bended and fit onto the car quickly. I was out of the shop as a very satisfied customer in 50 minutes. It is hard to find a no nonsense and honest auto repair shop. I am glad that I found Barker Muffler through Angie's List last night.

Description of Work
Replaced the rusted through section of exhaust pipe before the muffler.

Owner was very honest about what was needed and not needed, no suprises.

Description of Work
Replaced my muffler and tail pipe.

Very pleased. It was a heck of a lot cheaper than the nearly $500 my Volvo shop wanted for a new header pipe. The service guy put it up on the rack and listened with a stethoscope. He found the crack and said it could be repaired. He also checked the catalytic converter which my Volvo shop wanted to replace for $300 and said it was fine. I OK'd the repair, and he did it while I waited for about half an hour. I liked the way the service guy explained things to me. He really came across as knowledgeable and experienced. I can't judge the quality of the work until I see how it holds up over time, but it sure seems good now.

Description of Work
We had a crack in the header pipe of our 1991 Volvo 240 sedan. They fixed the crack using welding techniques, rather than replacing the pipe itself.

BARKER HAS GREAT CUSTOMER SERVICE AND THEIR WORK IS GREAT. THE TURN AROUND FOR WORK IS PRETTY FAST AND THE WORK IS QUALITY. GREAT EXPERIENCE. HIGHLY RECOMMEND THEM.

Description of Work
REPLACED A BAD MUFFLER, ALSO CUSTOMIZED A MUFFLER FOR ANOTHER OF OUR VEHICLES.

BRAKES-- MUFFLERS-- ALL EXHAUST SYSTEM WORK-- (WE SPECIALIZE IN CATALYTIC CONVERTERS, BE SURE TO CHECK WITH US FOR A GREAT LOW PRICE ON A HIGH QUALITY CAT)-- CUSTOM EXHAUST WORK-- METAL FABRICATION WORK-- CUSTOM,WELDING-- UNDERCAR REPAIRS SUCH AS SHOCKS, STRUTS,SUSPENSION, CV AXLES, ETC.