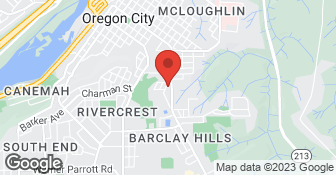 We have been in business for 35 years. We are family owned and our mechanics are well versed in all aspects of auto repair. They are ASE certified and take pride in there jobs. We strive to satisfy our customers at a reasonable cost. We are easy to talk with and welcome direct communication with our customers....

They did a great job, it just took a long time to fix.

I think it was the air conditioner. They looked it over because it was getting old and to make sure that it was working correctly. They are a little shop so sometimes it takes a while to get in because they are good. They just made it work. I think it was low on something. They were having a hard time because one of their employees were out. It was a couple of weeks. They did offer me a loaner but I already had another car.

Description of Work
They looked over my PT cruiser.

I actually took it to the dealer and they gave me a quote on all these things that need to be done. It was like $6000. I took it to Jim and he looked at it. It was like $2000 or even less than that. He went through some of the things that they said needed to be replaced. He did not really think that they needed to be and gave the reason why not. That was the biggest thing. He kept in touch with me the whole time if parts were not available or would take longer.

Description of Work
He repaired my car.

It went extremely well. I had an issue with the ESC light going on again so took it back and they spent over a day on it and remedied the issue. I was only charged labor when I took it back to them which I thought was extremely reasonable.

Description of Work
the check engine light kept coming on along with the ESC light. I also got a tune up

They do a good job, and I am satisfied with their work. Their communication is also quite good. Their price is a little high, but it is worth it.

Description of Work
I have used Jim Estes' Garage, and that's where I have been taking my car lately. I have various things done there, from small things like windows and door locks to more mechanical things like transmission, and brakes.

Thank you for the nice review. We appreciate our customers and value their comments. We hope to see you the next time you need repairs on your vehicle.
2.0

We should have realized that there was going to be problems after a series of mishaps. 1) We took the car in and the ordered the wrong part because they ordered a 2 wheel Torque Converter. 2) They underestimated the time it would take, so after calling and being told they should be able to wrap it up by 5, I was shocked when I arrived to pick up the Honda, that they were closing up shop and my CRV was still up on the rack. No call to tell me ahead of time, my ride had to wait and take me back home, and I had no way to get a rental that evening. They were done for the evening, and the owner told me that they were already way over the allotted time for this, as they had read the computer estimate for a 2 wheel and a 4 wheel was about four hours longer. They and quot;graciouslyand quot; were going to stick the quoted price, even though they were well over the man hours and it was costing them to finish the repair. And no, they would not pay over-time for someone to finish it up, as it was taking four guys to get the transmission back into the car. 3) Immediately after taking the car out, the green D (drive) light started flashing. Every time they tested it, they could not get a code. I ended up taking it to the dealership and they were not getting a code as it was intermittent, and told me to bring it in when it was flashing so they could hook it to the computer. 4) And by the way, they forgot to install all the bolts on the sway bar links that holds the transmission in. The transmission was leaking fluid. 5) We decided to do the brakes . . . elsewhere . . . they can't figure out the green flashing light code, but it has something to do with the transmission/torque converter 6) Finally, this week, the green light flashes EVERY time we drive. We take it to the dealership and they get it on the computer. Code PO741 . . . Torque Converter and quot;Stuck offand quot; or Sylenoid E Failure in the transmission. Will need to tear down transmission to find out for sure. The dealer said we would need to replace the torque converter and they were shocked that the torque converter had just been replace. Dealer-service recommended that we take the service printout back to Jim Estes and show them the code and ask them to make it right. 7) Jim Estes tested, agreed, and explained that there is nothing connected between the two events, completely separate issues. The owner-mechanic has a friend down the street that replaces transmission and they had already called . . . the mechanic friend would be available to rebuild the transmission, he's done two of these (CRVs?) before. Seems that the failing part sometimes will work, and sometimes stays and quot;offand quot;. Can't say if it is a faulty converter or the sylenoid. However, when calling to get transmission estimates from the dealer and two different certified shops. . . everyone has been shocked that a Honda CRV 2006 with 119,000 miles would need a new/rebuilt transmission, without it being damage from other causes. Honda CRV's don't need new transmissions until 200k. I called three dealership-service stations for prices on new transmissions and they were skeptical about the transmission . . . are you sure it is not the converter failing? This is NEVER heard of at this mileage. So far the consensus is that the during the converter replacement that system was not cleaned and junk (my term for their fancy word) was allowed to enter and probably damaged the Transmission. We are not pleased with the service and are not surprised with the lack of accountability. After all of the mishaps to even instal the Torque Converter, why would they take responsibility at this point? All they have to do is say it is not related so therefore it is not under warranty. We are stuck with a problem that did not exist before the Torque replacement. Granted, the car is no longer shuttering, but now the transmission seems to be shot. A $700 repair is going to cost us $2200 for rebuilding the transmission, and if this isn't the answer, we will have to replace it for $4500. Definitely not going to refer people to Jim Estes and we will definitely not go back again for any of our cars.

Description of Work
In January, we chose Jim Estes to do a Torque Converter replacement on our Honda CRV. We chose Jim Estes, as they had worked on our Odyssey a few years back and did a decent and reasonable job, they are also local and we can walk a half mile to drop off and pick up.

They always quoted a price before starting the job and were very friendly.

A friend of mine suggested Estes' Garage in Oregon City. He said that he had work done there and was very satisfied with the cost and repair. My 1997 La Sabre would not pass DEQ because of a cylinder misfiring. I was quoted $285.00 for the tune up including new spark plugs. Went to the DEQ that same afternoon and it still wouldn't pass. Went back to the garage the next day and they did further checking and found out that the #6 fuel injector was very bad (it had to be replaced with a new one) and the other 5 should be rebuilt. The cost for that repair was $359.95. Needless to say it passed with flying colors this time. My car for the first time runs better than when we first bought it as a pre-owned vehicle in 2000.

Description of Work
My car would not pas a DEQ test for renewal license tags because of the number 6 cylinder misfiring. It took 2 visits to fix the problem. 1)Tune up and new plugs. Results: Still would not pas DEQ 2) Coding at the garage the second time indicated that the #6 fuel injector was very bad and need to be replaced and the other 5 injectors would be rebuilt. Results: IT PASSED DEQ!!!

Total lack of professional staff...the staff is under trained and doesn't have the knowledge needed to properly work on cars. Most of the staff look like prison release parolees - foul language used and more! Avoid this place at all cost. I had to have them re-do my brakes 4 times...costing me time and money to do it again and again. If I wouldn't have caught the mistake - I could have been killed in a car crash from not having my brakes installed correctly!!! They should be shut down by the state.

Description of Work
Brake work on my car.

IN AND OUT AUTO CARE

Taking Great Care Of Cars Since 2001 In and Out Auto Care is a family owned business delivering honest and professional automotive repair and car maintenance services to people in Gladstone and surrounding areas, including Milwaukie, Oregon City and West Linn. Our quality ASE certified technicians employ the latest automotive technology and are equipped to handle all major and minor repairs on foreign and domestic vehicles.  …

Family owned and opperated business that believes in honest relationships with our customers.  …

Insured
All statements concerning insurance, licenses, and bonds are informational only, and are self-reported. Since insurance, licenses and bonds can expire and can be cancelled, homeowners should always check such information for themselves.To find more licensing information for your state, visit our Find Licensing Requirements page.
General Information
Free Estimates
Ask for details
Eco-Friendly Accreditations
Yes
Payment Options
Visa, MasterCard, American Express, Discover
Senior Discount
No
Warranties
Ask for details

JIM ESTES' GARAGE is currently rated 4.3 overall out of 5.

No, JIM ESTES' GARAGE does not offer free project estimates.

No, JIM ESTES' GARAGE does not offer a senior discount.

No, JIM ESTES' GARAGE does not offer warranties.

Are there any services JIM ESTES' GARAGE does not offer?