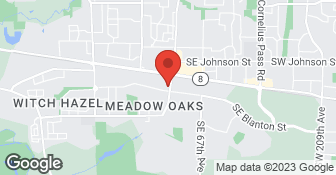 We are an indoor/outdoor dog daycare, boarding, grooming and training facility. Let your dog enjoy their day while you are at work, running errands or out of town, by bringing them to Dogs Day Out for a day of fun & socialization with other doggie friends. We offer an impeccably clean facility with plenty of fresh air and water. Check out our website, www.dogs-day-out-daycare.com for more information or feel free to stop by for a tour....

When you leave your dog or cat in someone else’s care, you don’t want to leave them with just any pet sitter. You want to place them with a boarding kennel that’s not only Certified and staffed by pet care professionals, but you want those care givers to treat your animal like family. For more than 30 years Rock Creek Kennels, Inc., located in Hillsboro, and serving the entire Portland, Oregon area, has been doing just that. At Rock Creek Kennels we treat each and every animal as if they were our own. Browse through our web site (or better yet, visit us in person) to see why at Rock Creek Kennels, we’re family!  …

The owner Becky is a *****. My silver lab Smokey was bitten on the face the first week he was there. He stills has the scars on both sides of his nose. The sent the wrong dog home with me several months later when they sent a silver lab named Piper home with me instead of Smokey. It took them an hour to figure this out. She kicked me and my dog out on Wednessday because she said I was rude to her customers. I was stand ing out side waiting for the lady in front of me to finish dropping off her dogs when a Indian Man walked right in front of me and I told him to get in line and wait his turn. So I was the rude dog and got kicked out. Read the other reviews and see what they have to say about the owner Becky.

First time there and was thoroughly impressed. She does not use cages but works on each animal within the timeline she sets. My dog had a big patch of pitch that had to be removed and she did a wonderful job. I will definitely take my dog there again.

I find the staff of Dog's Day Out to be excellent. I think they genuinely care about each and every dog at the facility. My dogs are happy to go there. All their needs are attended to. My dogs are older girls and have specific dietary needs as well as medications. This is always handled very well. I was concerned the last time I boarded my dogs, as it was for a much longer period of time than usual. After their two week stay, my dogs were happy and healthy. Photo attached of my dogs playing in one of the little pools at Dog's Day Out.

Description of Work
I have boarded my three dogs at Dog's Day Out as well as occasionally dropping them off for daily day care. I've also had them groomed at Dog's Day Out.

I had been taking my dog to this place for a couple of years, since she was a puppy off and on for boarding and daycare. I hadn't had any issues, in fact they always told me how well she was doing. But the last time I took her in...they said the same thing. No problems, except maybe a small issue was another dog that wasn't anything major. So, I thought great...until I got the letter in mail saying my dog was no longer welcome for daycare or boarding. A LETTER in the mail. No phone call. It stated that my dog was showing more and more aggression, that she was jumping on the staff and they recommended training. Instead of calling me or talking to me when I picked her up, they did the most cowardly and unporofessional thing and sent a letter in the mail. I have had no issues with my dog. She occasionally jumps up on people...until I tell them what to do to keep her from doing that (something I learned in training that these dog and quot;professionalsand quot; obviously had no clue about.). I would not recommend this place just for the fact that the owner prefers to deal with issues that way. PS. A few weeks after my dog's last visit, she was diagnosed with a disease that would have cause her to be grumpy with other dogs. She is now medicated and doing great. Had they contacted me directly, we could have discussed this and they would have know why she might have been a little and quot;aggressiveand quot; during this visit. ***Response to their response: I need to clarify a couple of things after having read the response from this company. First of all, my dog is a large dog, yes a Great Dane. but 150 pounds? Not even close. At her last visit with them she barely weighed 100. Now, after getting the medication she needs and being healthy she is still only barely 120. 50 extra pounds on a dog would be a lot of exaggeration. Also, just because i did not spend hundreds of dollars to take her there every week, that does not mean that she was not socialized. She spends a lot of time with other dogs. I have never had any issue with her besides when she was being taken to Dogs Day Out. Even the aggression the owner talked about with my neighbor dog was not an aggressive type of behavior. Just dogs wanting to play together. I take her on walks and even when other dogs are going crazy she doesn't even bark. I was completely confused at the behaviors they described about her. So, again...my biggest complaint was how they dealt with this. I was never under the impression that she was a safety problem. Even when she bit the owner it was explained to me that the other dog had not been introduced to the dogs in the way and that it was supposed to have been introduced. And while they say they did call. I did not get a phone call of any kind. No message left for me. Just a letter in the mail explaining she wasn't welcome anymore. I think they felt they were just done with me as a customer. That is too bad. I may have continued to bring her for grooming, as the groomer always did a great job. And forget me ever recommending that place to any of my friends or coworkers. Fortunately, i have found a place that loves having my girl there and have not had ANY problems of any kind with them.

I would first like to state a very important fact that the client forgot to mention. Her dog is a 150lb Great Dane. She did come to daycare and boarding on and off, and would not show up for a couple months at a time, which during the puppy phase it is very important to have them come consistently with no huge time gaps so they stay familiar with things and the new dogs that join the pack. The first incident with her was when she tried to go after another dog and bit me instead, bruising my leg considerably and left few teeth marks. Had I not had a hold of her collar I most likely would have been in the emergency room getting stitches. The owner was totally advised of the situation when she picked up, by our manager and then called to talk to me about it, as I was not in on the day she picked up. I informed her it was no way aggression towards humans, but we did notice she was showing aggression towards smaller fluffy dogs this time back, which we had never seen in the past. The owner then informed me that she had noticed some aggression through the fence at home with one of the smaller neighbor dogs. I explained to the owner that maybe she was just anxious cause she had not been to daycare in quite sometime and was boarding this time. We had hoped that it would get better and maybe this was just a one time thing, as she had always done well up to this point. As for the second incident that she was sent a letter about. The owner picked up after hours because she was having a bath before she went home, and our groomer checked her out and was unaware of the incident that occurred with the other dog. I did call and leave a message for the owner to please contact me and never heard back from her, which is why a letter was sent. As for the jumping on the staff members, the dog has done this since she started coming to daycare and the owner says to just turn your back on her, not quite the thing I want to do when you've got a 150lb dog barreling towards you. The owner has been informed by the staff members since she first started coming to daycare that her dog had a jumping issue. It may have been out of excitement, but cannot be tolerated. We did work with the dog a lot on the jumping issue, which did get much better, but you never knew when to expect it and we could not take the chance of one of the staff members being seriously injured. It is true that in the beginning she did great, I even took her home with me for boarding when she was younger and had no issues, she had perfect house manners. However, as dogs mature, their temperaments can and do change. It was in the best interest and safety of our staff members and other dogs, that she not be allowed to return. The owner was completely aware of her jumping and the aggression from the first time, which was when she bit me.
5.0

Description of Work
Bobby at Dog's Day out is the best dog groomer in the world. He is so kind, smart and gentle. He has done my dog for about one year now and he always does a great job. It's always a wonderful feeling to go and pick up my dog after Bobby has groomed her, she looks wonderful and is always relaxed and happy.

There probably are a lot of people around who would like to know what an excellent job they do. They clean out all the under hair and when he comes from there he is so soft. It is just a great place. I don't think they board dogs. They are friendly. You stop there and drop off your dog, then pick him up and hour later. They are fast and conveniently located. I will use them again in the future.

Description of Work
I take my Doberman to Dogs Day Out to bathe it. They also trim his nails, clean out his ears and do other things to clean him up good.