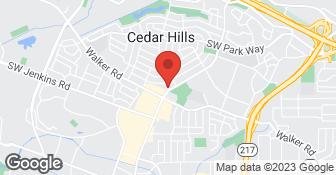 General dental office with exceptional hygiene care and 3 doctors with excellent credentials in advanced dental procedures such as cosmetic dentistry, implant dentistry, sleep apnea treatment and neuromuscular dentistry (TMJ) . Offering the ultimate in quality, patient comfort and technology in one of the most modern green dental facilities in the northwest! Check our website for more information! There are 3 dentists at this site- Dr. Alan Montrose, Dr. Jodi Dotson and Dr. Alan Chen. Surgery is performed at this location. To see if a dentist is board certified visit www.abgd.org...

Very easy and modern facility with great experience from the front desk to the passion of the doctors. It was clear my previous dentist did not perform the same caliber of work. I have full confidence in continuing with needed work here.

I just started going to them. They're good. They came highly recommended to me through a relative. I was very impressed with everything about them.

Description of Work
It was for a cleaning. They did x-rays and a cleaning.

My husband used an Angie's List coupon for a free consultation last year. Since the good reviews were mainly about Dr Montrose, that is who he wanted to see. However, he was told that to see Dr Montrose he would have to pay $95; the free consultation was with Dr. Jeremy. My husband ?(I will call him Paul)?wanted extra?whitening and a fix for the old fillings that were in the front and too dark for his teeth now that he had been bleaching them.??Dr. Jeremy didn't seem to have a good handle on what my husband wanted done. (By the way, I was there, too because was interested in what the doctor had to say.) He recommended straightening with Invisalign, which we didn't even mention, for $5000. Jeremy didn't give us much information about the rest. In February of this year, I gave Paul an anniversary present of getting his teeth fixed -- the old fillings replaced so all his front teeth would be white.??We checked the reviews and decided to have Smiles Northwest do it. Paul had been using Crest Whitestrips so the baseline white of his teeth was?good. He went to his appointment ?with Jeremy?and I thought he would come home with white teeth. However, his first appointment was only more bleaching, for $495. I was surprised because I didn't think he needed it and it didn't increase the whiteness that much. Two weeks later he went in for the fillings to be replaced for $325, I believe. There were fillings in about 4-5 of his front teeth. When he came home, there was only one fixed, and it was a spot that had been sanded down. When I asked about the other teeth, he told me that Jeremy though they were okay. I was furious because of course they were not okay -- the old fillings, still there, were brown and unsightly.??Apparently Jeremy did not want to do that work, or was not capable, and sent Paul home. ?He was just as happy to leave, since Jeremy was unsteady with the drill and hit other surrounding?teeth and Pauls gums.?About an hour later, a piece of tooth fell out of the tooth right next to the one Jeremy had been working on. No, it was not part of the filling material, it was part of a completely different tooth that Jeremy had apparently chipped while working unsteadily with his drill.? Paul was furious and talked to Jeremy who denied that it was a different tooth. He insisted it was filling material. Jeremy offered to fix it, but Paul didn't want that guy to touch his teeth again so we are going to have the job done correctly somewhere else. ? My suggestion to you would be that if you decide to go to this place, have the other doctor take care of you. Jeremy is not the best dentist in the world. ?

Description of Work
Bleach teeth, sand down a dark spot.

We value all input from our patients and make every effort to offer the best and highest quality care possible. In this case we are shocked by the misunderstandings reported. The information expressed in this review is in stark contrast to our detailed chart notes, patient records, photo documentation of the treatment completed, and signed treatment plans for the different treatment options which were presented and explained. The offer to discuss any misunderstandings and address any concerns with the treatment provided was met with a verbally abusive response to our staff at a level which we have never in over 30 years of business experienced before. We take pride in making sure that we always perform high quality dentistry with the highest integrity. This is a rare and unfortunate case where we would also recommend your treatment to be performed elsewhere.
5.0

The cleaning went well. The lobby is clean and quiet. There was a kid area with tv. I had to bring my kids (6 &8) and they were entertained by the TV, books and toys while I had my teeth cleaned.

Description of Work
My 6 month exam and cleaning.

I have been bringing my daughter here since she was a year old (she's almost three at the time of this review). Dr. Dotson is great with kids and my daughter really likes her. The office staff and techs are amazing, too - they are super friendly and efficient and seem to genuinely enjoy their work. They have reassured me that my daughter's appointments are mainly to get used to being in a dentist's office, and they don't force her to let them work on her or get frustrated if she gets scared and doesn't want to open her mouth. Last appointment, the dentist was running behind, so a tech brought in a few toys and gave me a gift card to Starbucks, just for waiting. Never had that happen anywhere else. For pediatric dentistry, Dr. Dotson is the best! My appointments are always great - I feel well informed for how the appointment is going to go, whether it's X-rays, a routine cleaning, or a consultation on cosmetic dentistry. The techs do a gentle, thorough job and Dr. Dotson is attentive, knowledgeable, and kind. Due to an insurance change, I can no longer go here, but I still take my daughter because she has an established relationship and good experiences here. As with anything, there are some negatives. We have had a hard time with the billing department - being billed several months after the appointment, even though we've paid up front, or receiving a bill or insurance statement several times. We also receive way too many reminder/confirmation texts and emails - I get about three texts and three emails per appointment, and that's pretty annoying. Overall, if I could make my insurance work, I would still go here, and I do still suck up the cost to take my kid. The pluses outweigh the minuses - I highly recommend Dr. Dotson and her team!

Description of Work
Regular dental appointments for myself and my toddler with Dr. Dotson.

I went into the office which looks clean and inviting and welcoming. I went to check in for my appointment and was received with a smile and was told to take a seat and the hyginiestwoudl be coming for me shortly. I did not wait more than 5 minutes and she come to get me. Greeted me and explained what we were going to do during this visit. Asked me if I had any further questions. we arrived at the area where she was going to perform the cleaning. she pulled up the pictures of my teeth to have a baseline of what to look for in my teeth during this visit. She initiated the cleaning and was friendly and gentle during the entire process. She was congratulating me for the work I had done in flossing and how healthy teeth and gums looked. then she called the dentist to come verify the work and check my teeth. Dentist was also quite friendly and courteous. then Hyginiest proceeded to give me a goody bag for the visit and without any rush, walked me to the front desk to check out and schedule the next visit. I was out of there in 30 minutes and quite pleased with the service performed and the overall experience from beginning to end. I recommend this dentist office to everyone.

I've been going to them for about a year. They are very friendly. They are efficient and on time. Their prices are pretty good for the services. Scheduling is very easy. The office is very professional. It is a really nice place to go to. The staff is very nice. Everything is great.

Description of Work
Smiles Northwest is my dental provider. I went to them for cleaning.

Description of Work
I was fitted with a dental appliance for the treatment of apnea.

They are professional, clean, and have a great location. I have a minimal wait time when I arrive.

Description of Work
This is our dentist. I've been using them for 15-20 years.

I use both dentists there and it is easy to get into; they have before and after hours. They also handle emergency service promptly and the office environment is very nice.

Description of Work
I see Smiles Northwest for dental care. I go there for my annual cleaning.

Your family’s SPECIAL SMILES deserve nothing less. You’ll find this and more at Fujioka Family Dentistry. The dictionary defines family as “a group of individuals living under one roof.” To Dr. Theodore (Ted) Fujioka and his daughter, Dr. Aimee Fujioka, family means continuing a tradition of excellence in dentistry and patient care. Since 1972, Dr. Ted has provided three generations of Vancouver families with honest, reliable and uncompromising dentistry they could trust. Dr. Aimee has joined her father in practice to ensure the continuation of this care for future generations.  …

How is Smiles Northwest overall rated?

Smiles Northwest is currently rated 4.8 overall out of 5.

What days are Smiles Northwest open?

No, Smiles Northwest does not offer eco-friendly accreditations.

What services does Smiles Northwest offer?