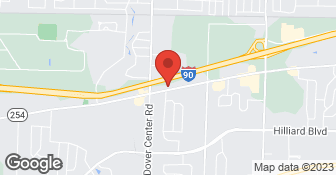 Associates in Dermatology, Inc was established with the principle of providing the highest quality dermatological medical care to the community it served. This was the same principal established by our founder Allen E. Walker, M.D. and his first partner John J. Stewart, M.D. Associates in Dermatology, Inc has been at the forefront in establishing and maintaining the highest standards of quality dermatological care. By staying current with all educational and technological advances, and by employing highly skilled and quality support staff and by always staying aware of our mission to serve the patient. We provide all aspects of Dermatologic care which includes the diagnosis and treatment of diseases of the skin, hair, and nails. We customize treatment plans, medications and procedures for each patient to meet his or her particular needs....

Dr. Hazen did my mohs surgery, and is a real nice guy, he did the surgery and he did the repair( stitched it up). He gives you the option of going to a plastic surgeon for a repair or he will do it if he has the time. Luckily for me, I was the last one to see him that day and he had the time to do the repair.

It went well. They also offer cosmetic services which I considered, but decided against. They periodically have specials for these services.

Dr. Hazen was recommended by my family doctor. Dr. Hazen thoroughly explained the Moh procedure to remove a carcinoma area on my nose. He made me feel at ease for what he would be doing. The doctor and his office staff made the experience as "good" as could be expected for someone undergoing surgery on one's face.

Description of Work
Remove a carcinoma area on my nose.

Dr. Reep was effective in removing a skin tag that had grown to where there were blood vessels that needed to be cauterized as well as several others by his assistant. He froze a wart that fell off the next day, however it came back as if nothing happened. Dr. Reep's bedside manner is very dry, almost what I would expect of someone doing work on an inanimate object; but the end result was within expectations.

They are good in what they do. They are friendly and very professional.

Description of Work
I used Associates in Dermatology for cosmetic with Mary Pat.

They are very good, personable and thorough. The doctors are very thorough.

Description of Work
I used the services of Associates in Dermatology.

I have been twice and both times waited over 30 minutes after my scheduled appointment time to see the doctor. The second time I waited 45 minutes in the exam room. At least that time the doctor was apologetic. The first time I felt like the doctor was in hurry and just wrote me a prescription and moved on. The second time she took more time once she got to me. The prescriptions has worked somewhat but I intend to discontinue it and try something else after my next appointment.

Description of Work
Exam and advice on skin problem.

I arrived in the office 10 minutes late and was not accosted, but greeted warmly by the front desk when I arrived. I was then asked to fill out some introductory paperwork and was seated in the waiting for approximately 20 minutes before I was escorted to an examination room where some general questions were asked of me by the doctor's assistant. After this short interrogation I again waited another 15 to 20 minutes before the doctor came in. At that time, Dr. Engersol and I had a somewhat informative Qand A that eventually led to him prescribing me a couple of topical creams and some facial cleanser, moisturizing lotion and cream. Towards the end of the visit I had the feeling that Dr. Engersol was wanting to leave as it was towards the end of their day at the office, leaving me feeling a little rushed. Dr. Engersol's bedside manner was fair enough but I didn't feel like he was very empathetic to my situation. He was very knowledgeable and made some guesses as to what my condition was but wasn't sure enough to give me a definitive answer. It seemed like I had to press him for information, maybe because it was the end of the day and he was ready to go home, I'm not sure, but I would have liked for him to give me some examples of other patients that might be similar to what I was experiencing or just some history of the disease and what his philosophy was on treating it. If it wasn't for me asking questions and expressing my concerns, I believe the visit would have probably been over within 5 minutes. In any event, I was told to come back in 6 weeks for a reevaluation. Overall, I would give this particular visit a B-. I didn't come into this, my first appointment ever with a dermatologist, thinking that I would come away with some profound revelation about my condition or to be told that everything was going to be alright and that there is hope for a cure for psoriasis, as I'm pretty sure this is what I have, on the horizon. Unfortunately, that's exactly what I wanted to come away with and didn't -- positivity and a little more empathy. I'm not saying that Dr. Engersol is a brute and an uninformed, uncaring physician, in fact, he was really quite amiable, I just feel that he was a little apathetic. Before I made the appointment with Associates in Dermatology I made an appointment with another physician who couldn't pencil me in until April. I believe I will keep this appointment. After all, it's always good to get a second opinion and a different perspective. At this time I'm not sure if I will follow up with Dr. Engersol in 6 weeks or not.

Description of Work
I made an appointment to have my skin condition diagnosed. I've been to my primary care physician several times concerning my epidermal malady, which just so happens to be a mild case of plaque psoriasis. My interaction with the provider was direct and informative.

They have several offices. They are great. I think in their practice there are five or six different physicians, some men and some women. They have a variety of specialty that they cover. Dermatology seems to be one the categories of specialization. Sometimes you have to wait quite a while to get an appointment with them. They are able to make necessary accommodations to get people in very quickly. It's one of the good groups.

Description of Work
I went to Associates in Dermatology about six months ago for dermatology.

All statements concerning insurance, licenses, and bonds are informational only, and are self-reported. Since insurance, licenses and bonds can expire and can be cancelled, homeowners should always check such information for themselves.To find more licensing information for your state, visit our Find Licensing Requirements page.
General Information
Free Estimates
No
Eco-Friendly Accreditations
No
Payment Options
Visa, MasterCard, American Express, Discover, Check
Senior Discount
no
Warranties
No

How is Associates in Dermatology overall rated?

Associates in Dermatology is currently rated 4.7 overall out of 5.

What days are Associates in Dermatology open?

Associates in Dermatology is open:

What payment options does Associates in Dermatology provide

No, Associates in Dermatology does not offer free project estimates.

No, Associates in Dermatology does not offer eco-friendly accreditations.

Does Associates in Dermatology offer a senior discount?

No, Associates in Dermatology does not offer a senior discount.

Are warranties offered by Associates in Dermatology?

No, Associates in Dermatology does not offer warranties.

What services does Associates in Dermatology offer?