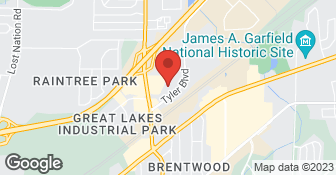 Your Generator Connection is a leading Generac generator installer in the greater Cleveland, Ohio area. We sell, install & maintain partial home and whole home standby generators to give you and your family piece of mind when it's needed most. Never be left in the dark especially during times of natural disasters or those pesky periodic brownouts or blackouts. Your Generator Connection is a full service Generac , sales, installation, service, and warranty dealer....

Mike, thanks so much. The crew you sent me were top notch. They were professional, personable and just over all great. They did fabulous work, even my neighbor who is an electrician for Cleveland clinic hospitals looked at their work and he commended them. Thanks, great job.

Very professional. Arrived on time. Found problem quickly and fixed. Part was under warranty so no charge. I had my first generator installed when residential units first were available in 1999. I needed a new unit in 2005 and found a company who installed it. In 2014 unit failed to start during a power failure at 10:30 pm on a Friday night . I called for service to that company and got an servicing service and no return call. I called generator connection and received call back in 10 minutes. It was the owner who was out with family and while at that time I wasn’t a customer he arrived in a snow storm and in dress clothes found the problem. Went to shop and returned with work truck and a temporary fix so I had electricity and heat. Work crew arrived at 7:00am and did permanent repairs and upgraded to prevent this problem from reoccurring. I use them for annual maintenance and are always keeping unit in perfect shape.

The service and professionalism where incredible and probably the best I've experienced in a long time. I will only use them for my generator needs going forward.

Description of Work
My Generator wouldn't start during a power outage. Called and Rusty picked up immediately and tried to trouble shoot over the phone. Couldn't get it to start, so he came out and tried to resolve the issue. The generator couldn't get started and needed to be repaired which would take a couple days to get the part. Instead of just saying sorry about your luck, he went and got a portable generator for me to use so I could run most of my house.

The provider initially came and measured for the installation of the stand-by generator. We were told of the power options and what would be involved as far as installation goes. We were given options as far as the size of the units and which one best fits our needs and what we wanted to keep running when the power goes off. We chose an 11Kw unit. We were told of the cost and how long it would take to install. we were also told we had to have the natural gas provider increase our PSI in order to get the generator installed and running properly. We were also told of any rebates available. The came about 1 month later and installed the generator. We were shown how it operates and who to call if there is a problem. They were very professional in their installation of the generator.

Description of Work
The provider installed a Generac back-up generator.

Excellent, no complainants. Has been working without problems for almost 2 years

The installation was extremely professional (I wrote a review last year for Generac) and the generator performance has been solid. We have had two outages in the last year - one 20 minutes and one 7 hours. The generator did exactly what it was supposed to do. I have a service contract for the installer to maintain the unit (once a year checkup, battery, filter, start up test, etc), that that just happened. I am very pleased with this company and the product.

Description of Work
They installed a 16kw standby generator complete with phone link to monitor its performance.

Everything was done right the first time. My only complaint is that Rusty was slow to do the extra electrical work required by the North Ridgeville inspector; but when I called the office, they resolved the matter right away.

Description of Work
Rusty and his company do nothing else but install Generac generators, and they are outstanding at it. All his workers are courteous, experienced, and punctual. Installing generators can be challenging and complex, and it's a job best left to those who specialize in it. Your average heating and cooling contractor or electrician could leave you with a very unsatisfactory result. I suggest you go with this company because you'll be delighted with their expertise. Moreover, Generac generators are the best, I don't recommend the other company that manufactures them.

They did an excellent job.

Description of Work
We had a generator put in by Your Generator Connection. They had to come out the last time and tweak something.

We thank you for choosing us! We look forward to years of service!
5.0

As I said above, it went very well. We did have a slight "glitch" a few weeks later at midnight & we immediately called back within minutes. The tech offered that he could come out or we could manually shut it off until the next day. This was Christmas! We said we'd shut it off if he walked us through it. It went fine. The owner called a few min. later to see if all went well. The next day the very slight problem was taken care of & all is fine

Description of Work
We had an all home natural gas generator installed. Right from the start we felt they were very professional. The owner came out for the estimate. He explained everything & answered all our questions. No hard sell. That was it & he left. We called & said we wanted one installed. He said we could stop by if we wanted to see the shop & the generators. He opened one up explained the insides to us & how it all worked. When the installers came out they also were extremely professional, clean, punctual, & polite. We are very pleased with the service we got & highly recommend them.

In mid-summer Rusty came to the house to determine the feasibility of installing a generator. He looked at the availability of natural gas to a probable site, evaluated the electrical supply to the house, and discussed with us the coverage we would like in the event of power outage. Once he had the total picture, he proposed installing an 11kw Generac generator, along with a "winter package" that would warm the engine and battery. He then applied for permits, an once they arrived in the office, the company set up an installation date. On the day of installation, three men arrived at 9:30am with a truck, about the time that had been arranged, and introduced themselves. After explaining what they would be doing, they began work. They were very professional and experienced--the team leader Mike had installed thousands of these generators! They knew what they were doing, so their progress was very efficient. They finished about 3pm. Mike took us on a "tour" of the machine and explained its functions and what to expect--electronic automatic reports to us and to the company, particularly if there was an outage or malfunction of any kind; when the weekly "exercise" of the machine would happen; what would happen if the transfer was triggered to the generator; and so on. We felt very well informed about the equipment and the company.

Description of Work
Installed a Generac 11kw stand-by generator at our residence.

When the Your Generator Connection sales rep Rusty was at my home for the expensive standby generator quote he was real slick and eager, but when I emailed this company, Your Generator Connection, for a 2nd quote on a less expensive job, there was no response at all by email or phone. I went with a more responsive and established Generac dealer instead. See my review of the Generac generator company I used in my other reviews.

Description of Work
I had received a quote for a standby generator previous to this request for a 2nd quote on a smaller portable generator set-up.

[member name removed] I apologize for missing this, You can be assured this was not intentional. If there's any way we can make this up to you please call 440-942-8449 Phones answered 24/7 Thank you.
5.0

Responded within 15 minutes during a blizzard and worked during the snow storm and near zero temperatures to get generator working during a power outage. Didn't leave until we had power. Followed up throughout the night and next day. Suggested and installed improvements, including fixed natural gas hook up to a more modern connection for better pressure, installed a heating blanket for motor, and a monitoring system for mobile phone and internet alerts. Very professional and would recommend to anyone for all home or business standby generator needs. They also installed a complete system for my daughter and they also were very pleased and had given me their contact information when we had our failure. So even though we were not a customer who had them install our generator they responded quickly to our service needs.

The customer service was wonderful.

Description of Work
I contacted Your Generator Connection and they will be installing generator for me.

We have been a Family Owned business for over 30 years. We handle all Residential Service and Repair Electrical needs. No job is too large or too small. We belong to the Eaton Certified Contractor Network. We are a Drug Free Company and offer a 100% Satisfaction Guarantee. Licensed, Bonded & Insured. We use a Straight Forward Pricing system where you know the price of the job before we start.  …

If you're looking for a local and reliable electrician look no further! I am a licensed electrician with 20+ years of residential & commercial experience. I can perform a wide array of electrical services, from panel installations to simple electrical repairs. Contact us today!  …

How is Generator One overall rated?

Generator One is currently rated 5 overall out of 5.

What days are Generator One open?

Generator One is open:

What payment options does Generator One provide

Does Generator One offer free estimates?

Does Generator One offer eco-friendly accreditations?

Does Generator One offer emergency services?

Are warranties offered by Generator One?

What services does Generator One offer?

Are there any services Generator One does not offer?