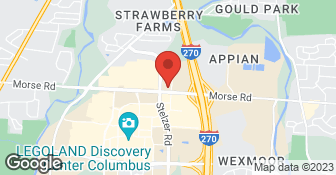 I like the company. I have no qualms at all about the company. But the wait is way too long when you go in, as far as picking up your glasses or having them fitted and such. They're just way too busy. You can't really schedule an appointment. It's first come, first served. They're all really nice people. They hate the wait times as much as their customers do, that people have to wait. You can tell they feel bad about it. Nobody just blows it off and says, "Oh, well." They're always, "I'll be right with you. I apologize." They have a sign-in sheet, so it's all done in order. But for me personally, I like to have an appointment.

Description of Work
I got my eye exam there and got fitted for contact lenses. I also purchased my eye glasses there.

My prescription was off so, the doctor did another exam. He corrected the lenses and did not charge me for the lenses. It was a good experience. They have an optometrist and he is very knowledgeable. They have good prices on their glasses. The doctors name is Dr. Dave Gill. They are a little bit busy so, I may have to wait 20 minutes. She did not explain that the lenses were hardened.

Description of Work
I went with Eyemart Express for glasses.

When I first went in, I waited for a while to ask a couple of questions because there were others ahead of me. The girl behind the counter pointed to the "stand" holding the only frames that one could choose for the $79 deal. There were not very many styles to choose from. I finally found 2 that I chose. One to have bifocals and one for distance sunglasses. I was measured for the glasses by the doctor who was very nice and explained to me that they could only give the basic glasses for that price. If there was anything else, such as having the reading or distance prescription on the whole lense, it was a lot extra. They fust offered it in the center of the lense. Both pairs of glasses were completely finished in about 1 hour, which they advertise. My only problem was that they don't advertise anything about what the $79 deal consists of. That is the reason I rated them a "B".

Description of Work
I did not have an appointment. It is also a walk-in facility. I went in to get an extra pair of glasses which were advertised for $79. Staff was very friendly & very busy.

Very satisfied with their service.

They offer a “deal” to get "2 Pairs of Designer Styles for $98.61" which was "including frames and lenses." In just over a month, I got two new pair of glasses for which I had managed to pay $349. My eye doctor had given me a thorough exam and determined I needed a different prescription for my eyeglasses. I set out to go to a large discount department store's in-store optical center where I've had very good service, prices and products in the past. However, this year on May 11th, I made an impulsive decision I have come to regret...I turned into Eyemart Express. I could hardly believe their great prices! After quite a while of trying on many, many pairs, I selected two of their “Designer” frames. Well, you know what they say about a good deal... I explained problems I've had with glare and that I've enjoyed the Transitions lenses that turn into sunglasses when outside and I work at a computer all day. Based on that one of their technicians suggested a pink tinted lens for all of that--certainly a less expensive alternative to their pricey upgrade to Transitions lenses. Yet my two pairs totaled $264! That $98.61 “deal” does not cover any UV protection (which I feel is a necessity) and it does not cover any kind of scratch-resistant coverage. Frankly, I was worn out so I just paid it and went to run a few errands while they made them in their onsite lab. When I returned, another technician (who had been quite helpful in selecting the frames), brought them out and she was just as startled as I was at the hideous pink lenses. They did nothing to reduce glare and likely would do nothing for computer eye fatigue. After reciting my needs to her, she advised turning one pair into prescription sunglasses and the other would just be clear. (To their credit, there was no extra charge for that.) It was then that I came to know they close at 7pm and are not open on Sundays. So it was a couple of weeks before I could return to pick up the "de-pinked" glasses. I was in a bit of a rush that day, so they did a few quick fit adjustments and off I went. The sunglasses were not too bad. The other pair however, made my eyes feel as if they crossed each time I wore them. Because I had them off more than I had them on, I often found myself staring at them with confusion. I finally realized that was not the pair I had originally selected! This pair had a ridiculously shiny, almost metallic gold finish on the inside--the reflection was causing the problem. Off to Eyemart I went—for a third time! By the way, this was on June 16th, over a month after I first went there! They had no record of my actual original selection for that pair and I could not even remember after trying on so many. So once again, I had to select another pair. I opted for the $85 upgrade to Transitions. The sunglasses were not working for me either so they offered to "soak" them to remove the tinting as much as possible. Good thing they didn't promise anything because my second designer glasses now look like something from 1975! Going to a costume party? Let me know and I might lend them to you!

How is Eyemart Express overall rated?

Eyemart Express is currently rated 4.2 overall out of 5.

What days are Eyemart Express open?

No, Eyemart Express does not offer eco-friendly accreditations.

What services does Eyemart Express offer?