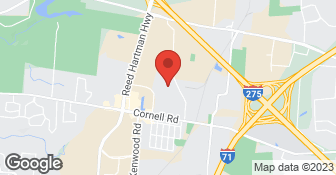 Our deepest and most sincere apologies [Member Name Removed]. Your time is valuable. We will strive more to be on time.
5.0

Excellent service. Explained what he needed to do and how much it would cost before starting.

Very well. Jerry Clark was efficient, on time, and very professional. He completed the job accurately and offered to return if necessary if a problem arose.

Went really well though more was done than expected and therefore cost a lot more than anticipated. I rated price a B because we decided to have everything recommended doe and did not get any other estimates so had nothing to compare to.

Quick to respond. A+ customer service. Very detailed and informative. I would recommend to friends and family.

Jerry called as I was about to call someone. He said he could be there by noon. I was about to call another company when he called back again saying he could be there in 30 minutes. Which was impressive. From the time I got on Angie's list until Jerry came was less than 2 hours. Jerry recognized the problem right away and fixed it in a short time. Since he was here I had him replace the main valve inside the toilet tank as well. He cheerfully did in a short period of time. He also recommended other work in the future. To me the only drawback was Jerry wasn't allowed to give prices or estimates. He had to call the office twice to get the price which I wasn't to fond of.

Description of Work
Leak in main toilet. Leaking on the floor and down through to the basement

He was stellar. He is very intelligent, personable and a pleasure to speak with. I would ask for him again in a heartbeat. He cleaned up after himself, wore "booties", gave me some terrific feedback as to the quality of my toilets and gained a huge amount of trust from me. Thank you, Jerry.

Description of Work
Checked the fill level in the guest bath toilet, suggested using sewer/septic tank friendly toilet tissue, did the toilet tissue test where the toilet flushed perfectly three-four times, et. al. He then fixed a leak coming from the center bolt on the 2nd bedroom ensuite toilet. So far, so good. Jerry said to watch it for approximately one week which I will do.

When he unclogged the pipe it worked for about 2 weeks. Then we had the same problem again. This was a problem with our main line, which caused septic contents to back up into our basement. When it happened again I contacted him and made an appointment. He never showed up for the appointment (which was made the same day I called). I called his office after he failed to show up and they told me they would page him. I never received a call the night of my appointment letting me know he couldn't make it. I called the next day and talked to him and he said he ran behind on the appointment before mine (understandable) and he would call me when he finished. He assured me he hadn't forgotten about me. He never called back. We ended up renting an electric snake and fixing the problem ourselves for $50. He failed to show professionalism by not calling to let me know he couldn't make the appointment and never calling back to reschedule. The man that I spoke to and whom did the work is the owner of this business as well.

Description of Work
I had a clogged pipe going to the main line and he used a manual snake to unclog it. The problem then reoccured after approximately two weeks.

Honestly, I would neither recommend his services nor would I hire him again. Gerald definitely knew what he was doing, but he left a mess in the yard and wasn't particularly friendly during our interactions. Additionally, he had the highest price of the companies that I contacted.

Description of Work
I hired him to install a new sewer line and to connect it to my home.

Gerry seems to be very knowledgable in the work that he does. He does good work. I've always been pleased with the work that he has done for me. He is always customer oriented. He is very responsive, within business day usually. I trust his work and would highly recommend him.

Obtained a referral to this company from Home Advisor and hired him to replace an existing fixture in a two story foyer. Jerry, the owner, quoted a price of $175 on the phone and did not visit until the day the work was being done. He changed the scheduled appointment time to a less than convenient time for me the day before the appointment but I agreed to it after he told me I'd have to wait four more days if I didn't take the earlier time. He arrived 15 mins after the scheduled time, which was supposed to be his first call of the day. The new fixture, still packed in the box, that was waiting for him in the foyer. Before even starting, he wrote out an invoice that included stipulations like "Up to 30 minutes of service time" and " Does not include: Fixture over 30 lbs or fans" and presented it for my signature. None of the items on his list had been discussed previously. I signed it and he and his assistant started unpacking the fixture. A while later, the assistant asked me for Windex and paper towels. A few minutes later, assuming everything was complete, I went to the foyer to inspect the work. Jerry, still standing on the ladder, pointed out he cleaned the ceiling where the old ceiling plate had left a mark. The new fixture; composed of two glass cylinders, the outer of which is clear glass, was smudged with fingerprints and I asked if he planned to clean it. He told me he "doesn't do housecleaning" and ask "who cleans your house, have them do it." My husband commented that he expected the light fixture to be cleaned and Jerry said he would clean it but added "I'm a very expensive cleaner." I couldn't pay and get him out of my house fast enough. After he left I looked at the invoice I had signed before he started work and he had added after our discussion "Customer responsible for cleaning" above the statements about a 10% discount that I was supposed to get but didn't. There was no mention of cleaning when I signed. I checked with licensing in Ohio and cannot verify he is a licensed electrician. Of course, I will never hire this contractor again. He was rude about refusing to clean the fixture before taking the ladder down and now a couple of senior citizens have a dirty, smudged fixture hanging from a ceiling that is 17 feet from the floor.

They came out the next day, on time, found the access point for the line (I didn't know where it was) and had the job done in an hour and a half! Seems like a family business that takes pride in their work. They were also very cordial and respectful of my property. They even re-covered the access point and replaced the mulch in the area so it looked like it had never been touched! I'm very happy with A. Accurate and won't hesitate to use them again for my plumbing needs.

Description of Work
I recently bought a house that had been rehabbed. After moving in I noticed that using the washing machine caused water to backup in the utility tub next to it. The bath tub also backed up while taking a shower, and in either of these states the toilet would come close to overflowing when flushed... I assumed it was the main line going to the street, so I started to call another plumber on Angies that had a $340 special to clean the main sewer line. Before I did that though, I decided to call the guy I'd bought the house from. In the paper work it said that he had cleaned the lines in the kitchen/laundry room (connected) and they were running fine (although he never actually lived in the house). He recommended calling Jerry @ A. Accurate so I took his advice. Long story short, it was good advice... I wound up getting the job done for $199 saving me ~$150!

The process from diagnosis to repair went very well.

Description of Work
We had an odor in our home and thought it was coming from the water pipes. We also had water leaking from the upstairs shower through the ceiling into the kitchen. Brian came out and diagnosed both problems. The open drain in the utility room was dry,causing the odor. He poured water in the drain and recommended that we do this every two weeks. The odor was eliminated immediately.The upstairs shower needed to be caulked. Brian did cut drywall out from the kitchen ceiling to make sure the pipes were not leaking. Brian caulked she shower around the edges where the floor and wall meet. This eliminated the leak. Brian was prompt, courteous and his price was was very fair. I would use him again if needed.

Jerry, the owner, was great. I got multiple estimates and was by far the most professional. He didn't try to oversell me and erred on the side of caution in his estimate. This guy cares about doing the job right. I've found myself a great plumber.

A ACCURATE PLUMBING WAS FAST IN CALLING US BACK. THEY CAME OUT WHEN THEY SAID THEY WOULD BE THERE. THEY HAD ALL MATERIALS ON THE TRUCK. THE SINK WAS DONE IN NO TIME AT ALL. THE PRICE WAS VERY GOOD.

Description of Work
A ACCURATE PLUMBING CAME OUT TO PUT A NEW FIXTURE IN THE KITCHEN SINK. THE HOT WATER SIDE OF THE OLD ONE WAS LEAKING BADLY. THEY ALSO PUT IN A NEW P-TRAP.

THEY CAME THE NEXT DAY. HAD SOME PROBLEMS WITH DIRECTIONS AS I AM NEW TO THE AREA AND THIS WAS "WAY OUT" TO HIM. HE TOLD ME A FEW THINGS I COULD DO TO SAVE MONEY.

Description of Work
REPLACED SUMP PUMP THAT HAD A BAD TIMER. TIED IN A BACK UP PUMP TO PRIMARY LINE.

CAN YOU GIVE AN A+ INSTEAD OF AN A?? THEY DESERVE IT. JERRY WAS THE EPITOME OF PROFESSIONALISM; AND JUDY, THE SECRETARY, WAS ON-THE-BALL AS ANYONE COULD ASK FOR. THEY RESPONDED WITHIN 24 HRS. TO MY CALL; GAVE AN ESTIMATE AND RETURNED TO DO THE WORK THE NEXT WORKDAY. PRICE WAS BETTER THAN ANY OTHERS. JERRYS WORK WAS SUPERB.

Description of Work
PIPES LEADING FROM SUMP PUMP INTO YARD WERE CLOGGED AND A 3 FOOT SECTION NEEDED REPLACING.

We have the experience and dedication to get the job done right! Specializing in Plumbing-Drainage services; We guarantee your satisfaction, and we won't leave until the job is done right. We pride ourselves on the quality work we provide, while delivering great customer service! Call or click for your estimate today!  …

Heating and Air Conditioning Service, Installation, and Replacement We guarantee your satisfaction, and we won’t leave until the job is done right. We pride ourselves on the quality work we provide, while delivering great customer service. Check out our services offered and call or click to schedule an estimate today!  …

No, A Accurate Service Plumbing, Heating & Air, Electric Co Inc. does not offer a senior discount.