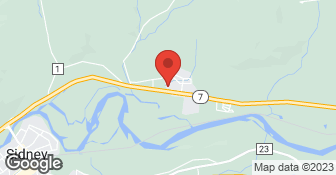 Valley Veterinary Associates is a 24/7 emergency mixed animal practice including: dogs, cats, cows, horses, and other farm animals. We travel to a wide variety of local farms to service large animal needs from surgery to regular physicals and vaccines. In our hospital we have the capability of admitting all patients, large and small. Please contact us to schedule an appointment!! :)...

I would give valley vet 0 stars if I could, they did a leg amputation on my cat and she died after surgery. We were told to change vets by friends but this office had helped save another one of our animals so we trusted them. We have been informed by other vets that there was no reason she should have died. If she was going to die it would have been when she was under and not after. We were given a call saying she was fine and the surgery went as planned and that we could bring her home that night and 30 minutes later they called and said she had passed. I am absolutely appalled by this office and I will never go a again. On top of her passing they made us pay a $3000 bill after they killed our cat. I urge people to please not go to this place I do not want what happens to my cat to happen to anyone else.

Dr Bregman is very unprofessional and downright rude. No care for my dog at all. Should not even be allowed to practice. The business knows about it and does nothing

messaged problem to VVA 4/26/20 on their website.4/27 no response by 5:00 pm called to told they would not provide service because have not seen us for 3 yrs. explained to receptionist we have always confirmed w/ Dr. Davis over phone or picked up treatment. Response was Dr. Davis was not in so no service would be given to us. This was, at one time, a very respected practice to me and I would always defend them against any critics that I've heard from in the past. Now I find that has all changed. This outfit is just there for the money!!! No Compassion for a suffering animal or the farmer trying to make a living with his animals!!!

They used to be good but have gone in a downward spiral! The secretaries are short and unfamiliar with animals. They recommended a flea medication for our dogs that was harmful to cats and then when questioned about it they told me - “well don’t give it to the cats”. I have waited for over an hour for a 6 minute appointment. There manners on the phone are horrible. I do not recommend!

The doctors are wonderful. They treat each pet patient with kindness, and concern. The staff is caring and compassionate. I was extremely impressed with their knowledge and sincerity towards each pet and owner. We’ve boarded our dog twice with no complaints. He’s always well cared for and happy. Wouldn’t dream of using anywhere else.

The vet diagnosed her with pancreatitis she had no symptoms of this charged me 697 for a IV and Blood work and brought her home took her next day to my vet and she has stomach cancer. I called them to tell them this they wouldn't even apologize or nothing. Vet is very rude.

My puppy had come down with parvo. I didn't know that was the case when I had brought him in three days earlier to see why he was acting strange. They told me it was Pacreantitis, no other testing was done. I brought him in three days after that after vomiting and diarrhea. They tested him and it came out to be parvo. They estimated me 1700. Another vet office quoted me 600 at the most. I left him at Sidney for the day and over night before transfer. They estimated around 500. Give or take a little. When I picked up my puppy they treated me as if I was a leper, reamed me another three hundred and made me wait a half an hour, when he was supposed to be ready for me to take him to his new clinic three hours away. Thankfully my puppy has survived, the vet clinic, Countryside, Lowville, NY charged me 200 for two days of aggressive care and they've contacted me to ask about his well being. I haven't heard a word from Sidney. I however still trust the vets entirely, their staff however needs to work on their people skills.

After two hours on a procedure that should take half an hour for eight puppies , we brought home a dead puppy. Called immediately to be told there must have been an issue and puppies often die. This was Dr. Megan Good. She didn't give a rats ***

She handles small and large animals. I will continue to use them.

Description of Work
I started to use them for my dogs needs.

He's 14 years old and he's declining. They're wonderful. I've been using for her for years. She's a mixed practice vet. They get an "A" on everything.

Valley Veterinary Associates is currently rated 3.4 overall out of 5.

No, Valley Veterinary Associates does not offer eco-friendly accreditations.

No, Valley Veterinary Associates does not offer a senior discount.

No, Valley Veterinary Associates does not offer warranties.

Are there any services Valley Veterinary Associates does not offer?