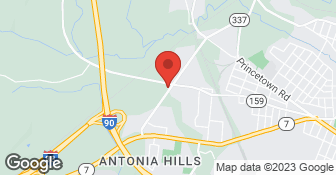 We may not think much about pavement, but it serves the function of maintaining the integrity of the pathways we walk on. Shabby pavements not only decrease the value of your property but also pose significant safety risks. Rely on New Image Asphalt for durable, long-lasting, and well-made pavements. We offer impeccable paving work with: Cobblestone Bricks Tiles Asphalt Concrete And more Call us to get started on a project today. Don’t hesitate to call and/or request a quote!  …

At Hirsch Pools, our goal is to provide the highest caliber of service to each and every customer; ensuring maximum satisfaction for every project. You can count on us to invest the utmost pride, honesty and passion into your dream pool.  …

Overall the project went very well. I received quotes and met with several pool companies before selecting DelGallo. They have the experience to build the pools properly and use quality materials from reputable suppliers. Pools are decent sized investment so it was worthwhile to spend the time performing due diligence in selecting a pool company. I have had a pools in different houses for decades now and know first hand that improperly built pools can be a money pit if not properly built. The owners recognize this and do not take shortcuts that others are willing to do to come in a few thousand cheaper on the bid. Regarding the project management, they were able to maintain the timeline and complete the project on time despite a few last modifications requested on my part. Mike was very clear about explaining any change in scope due to my requests and associated costs. Out of the project bids, DelGallo provided the most detail regarding what was included in the project. Make sure your bids include the cost (or estimate) for backfill. Many don't include this and yet they know that in many cases it will be needed to install it properly - proper drainage is critical and problems may not surface for years after install. I am a property investor and deal with many contractors and companies to maintain and improve the properties I purchase. Finding a good company to work with is not easy and seems to be getting more challenging. DelGallo is one of the best companies I have worked with out of the hundreds I have dealt with over the years.

This project did not go well. This company was unable to follow a professionally designed landscape plan. Specifically, the pool location was detailed in the plan, and despite having access to this plan, they installed our pool both out of line with our house, and out of line with a set of stairs meant to lead from a patio to the pool’s stairs. Initially, Mike was friendly and pleasant, however, once this issue occurred, he became very unprofessional, and extremely unwilling to compromise at all in order to work with us to resolve the problem. Do not be deceived, you learn a company’s the true nature when you see how they handle a problem. We were initially very upset about the pool being installed improperly as we had spent a lot of time and money on a landscaping plan to create a nice outdoor space. Instead of squaring the pool with the house, they chose to square it to our woods line. Not only did this result with an obviously crooked pool, but it also completely messed up our landscaping design. They had made an obvious critical error, and instead of owning up to it, they blamed the crookedness of the pool on our house not actually being square. We measured this, as did an independent contractor, and the house is definitely square. We tried very hard to work with them to come up with a way to mask the problem, since the only way to truly fix the problem would have been to move the pool (which we never contemplated doing). Ultimately, we realized that in order to mask the problem, we needed to need to use pavers around the pool (instead of concrete) whose lines would distract the viewer from the crooked nature of the pool. This was where this company’s true colors came out. This change in our plan, to go with pavers around the pool, led to even more problems with Mike. While trying to come up with a solution for the pool, we had mentioned to him our decision to go with pavers around the pool, and it then came to light that they had performed extra work on the project, NOT contracted with them, under the assumption that they would be installing a large concrete deck around our pool. We had never committed to any such work, and were actively interviewing other contractors for the work, and had explicitly told Mike on a prior occasion that we did not like his concrete work that we had seen on his other job sites. The extra work included additional digging around the pool and filling with crushed stone that he performed in preparation for this deck work that we had NEVER agreed to, NOR EVER DISCUSSED HIM DOING. At this point, Mike became visibly upset with us, declaring that he had to get paid for the extra (non-contracted) material and work. This change in Mike’s behavior occurred despite that fact that we had never suggested that we would not pay him for that work. However, the actual pool itself was not yet finished. The liner, lights and other accessories still needed to be installed. Also, all of the electrical work needed to be completed. We had decided at this point that we wanted to finish the pool, and a few days later inquired about the liner, and were told that once the additional crushed stone and labor was paid for in full, we would “talk about the liner.” Basically, the company was not going to finish their contracted work until they were compensated for work that we never authorized, that amounted to an extra $7000. They were, in effect, attempting to extort us for the money. Once this happened we realized that there was no way to resolve this amicably, and we had lost trust in their ability to finish the project. We wanted to have another pool company finish the job, and asked for a refund for the work not yet completed, including the cost of the liner that had yet to be ordered, as well as labor involved in installing it and other accessories. They refused to compensate us in any way. They remained hostile, and petty, and were never able to admit any fault in the disaster that this project turned out to be. In addition to the extra money we had to spend to cover their mistake, we also ended up paying for the completion of the pool installation twice, as we had not been refunded for the work not performed by Del Gallo Country Pools. Not only did they cause us severe distress with their work and unwillingness to compromise anything in an effort to resolve the problem with the pool, they also systematically harmed our personal reputation with multiple other contractors and pool product distributors while we were trying to complete the project, all in an effort to protect their own reputation. We would strongly discourage anyone from working with this company in the future.

We were very happy with the job performed. It was done efficiently and there were no added costs or problems. They are also very helpful when you call with questions. We would highly recommend using them for any pool needs

Extremely well. Very experienced staff made the whole process from quoting, installation, to opening, quite painless. They were the only company to be upfront about all the costs associated with the installation. It took me sometime to obtain true comparative bids from the other vendors - some left off the need for crusher rock due to water table level, others underestimated the cost of stamped concrete, etc. I did a fair amount of analysis on-line before obtaining bids and selecting vendors however became convinced that I should include them after talking to several neighbors who recommended them over several others. After selecting DelGallo, they installed the pool in an extremely timely manner and according to schedule - this was a rareity for me for almost all of the project work I have had done over the years typically has been delayed. Overall, highly recommended.

Gerat. Guys were ahead of schedule and called in advance to pull-in the scheduled installation date. Very pleased with the response, professionalism and installation.

Description of Work
I had a new pool liner put in, by Del Gallo agter reciving 3 quotes from other companies..

They finally came out in July. The concrete is falling apart and we have disputed that there is a expansion joint in there. They have repeatedly stated that there is a expansion joint in there it's just that we can't see it. The provider that did our pool work examined the situation and he said there is no joint under the concrete. They came out this week now they are drilling and their solution still will not fix the problem. It's not just a tiny crack the concrete is crumbling. If it had been done correctly the first time there would have been no problem at all but now it's turned into a mess. We have a gunite pool so it doesn't have a liner and all of this decorative concrete is falling apart. They are just out there sawing away and he said that he'll install the expansion joints and sure it's going to solve it from cracking further but we still have the existing cracks. I'm very frustrated because it needs to be completely redone instead of trying to do this patch work.

Description of Work
They did the decorative concrete work around our pool but it has begun to fall apart.

Frank and his son Mike are very knowledgeable and treated us with the utmost respect. They were very prompt and easy to get along with. Phone calls were always returned promptly by Erica in the office. These are very trusting people who went out of there way to make our experience the best.

Description of Work
They installed a Mountain lake in-ground swimming pool and new stampcrete patio with walkway. They installed fibre optic lighting, with fountains and waterfalls.

WE HAVE CLEAR WATER IN OUR POOL ON A SUMMER DAY. THEY ARE IMMEDIATELY AVAILABLE. WHEN I CALL IN THEY CAN PUT ME IN TOUCH WITH SOMEONE IMMEDIATELY. THE PRICE IS VERY REASONABLE.

Description of Work
THEY CLOSED MY IN GROUND POOL. I ALSO GET MY CHEMICALS FROM THEM AND THEY TEST MY WATER.