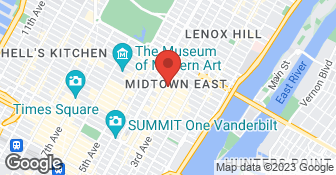 Roadway Moving is Angie’s List Certified for one reason: we do everything possible to deliver the best customer experience in the moving industry. Our team works hard to make your move as stress-free as possible. That means no surprises on price. Always on time (OK, 99.4% on time.) Clear communication before, during and after your move. Careful packing, unpacking and storage. And of course, we offer contactless moving and industry leading COVID safety protocols. So, whether you are moving across town or across country, moving your home or business, Roadway is a nicer way to move. It’s no wonder why we receive Angie’s List Super Service Award annually. We are currently not able to service NJ intrastate moves....

Have you heard stories of a psycho hormonal #prego lady moving? Well, that was NOT me! Miguel Rivera and his team handled my every request and solved every hint of a problem before I could formulate a full sentence explaining it. They were so sweet with my 3 year old daughter, she felt like a star the whole day. Roadway conducted a walk-through appointment via Zoom beforehand, and after the sales person took a note of everything we’re moving, I was given a guaranteed quote that doesn’t change regardless of the time the move would take. I loved not feeling rushed. The guys worked very efficiently but also took extra care of all of our stuff. Our “new” apartment is actually located in an old pre-war building with no elevator. All of our furniture and boxes had to be brought up 3 flights of stairs. The “highlight” was the couch not fitting through the apartment door at which point Miguel took the door off instead of unwrapping the couch which would most likely damage it. 2 doors and a few tight turns later, the couch stood intact in the room of my choosing. After which my husband ran to the ATM because the suggested tip amount that we prepared didn’t seem sufficient to express our gratitude. I highly recommend Roadway to everyone who wants the least stressful move.

Description of Work
Move to a 3rd floor walk up

I was moving cross-country form NYC to California, so hired Roadway for the move. After an initial quote and consultation, I was told to move out of my apartment in New York a week early, so that my things would arrive at the beginning of the ship window in California. The first sign that things were off, was when the movers arrived and told me that I would have to pay an additional $1000 from the quote that they provided to me (based on their own virtual tour and inventory of items). I had to go back and forth with them and finally agreed to pay $450 additional. All of that would have been fine, but here is when it went from a bad experience to the worst experience I have ever had. After sleeping on an air mattress in NYC for an extra week and unable to get an update on the status of my goods arrival in California, I came to find out that my stuff was still in New York and had not even left yet. The arrival date I was given was over a week after I arrived in California. I told them that I would have to get a hotel room for an entire week now and that I had slept on an air mattress for a week in NYC for no reason. Not only that, but I had to pay an additional $450 to do so. The customer service representative that I spoke with, Carlos, did absolutely nothing to ease my concerns and simply regurgitated lines about the delivery window being two weeks and could not seem to understand that I was told to move out a week early. If I wanted to simply take the ship window, I would have moved out of NYC at the last possible moment. After everything finally did arrive at my new residence, there were multiple boxes of broken china and boxes marked "Fragile" that were clearly stacked below multiple other heavy boxes. After all of this, both Carlos and another customer service representative said that they were going to call me back with a plan to make this "right". However, now almost two weeks later, I have not heard anything back from them. Things happen on a long cross-country move, so any one of these issues would be understandable, but it is Roadway's true disregard for their customer's concerns that will make me tell anyone that I ever speak with again about moving not to use them.

Description of Work
Unquestionably the worst customer service experience of my life.

They got me the estimate right away and were very responsive. Pricing was on the higher end with them.

I'm happy I trust the @roadwaymoving team for making my moving process from Nyc to LA so smooth, especially during Covid. They did it respecting the propers safety precautions & all my belongings arrived here. Now I can unpack & really start settling into my new LA apt.

I highly recommend Roadway Moving. They were professional and highly communicative throughout the whole moving process from booking to moving day. Everyone wore their masks the entire time. They moved quickly, but carefully. It was a stress free experience!

Amazingly seamless. The entire team from their on call representatives to the drivers to the movers - were all so very professional and kind. I was very concerned about moving during a pandemic however Roadway made me feel safe and their team kept their distance, wore correct masks/gloves, and really made me feel at ease. I would highly recommend them to anyone I know needing to do a big move w a lot of valuables.

Description of Work
Moving from NYC to LA

Roadway Moving did an AMAZING job with my move. I was a little nervous about moving during a pandemic, but their team took all the covid precautions and were quick, professional, and took care of all my fragile boxes and furniture. They even packed a few items that I hadn't packed myself with no problem! From the quote over the phone, to the actual move, I was thoroughly impressed by Roadway! I will 100% use them again for my next move! -Rachael E

I moved with Roadway in 2019 and I used them again because they were so good. The team is very organized in how they assessed my furniture and belongings so they knew how to load and unload the boxes and furniture in a way that wouldn't make it difficult for me to unpack especially in such a tight space like my studio apartment. The whole process felt very safe and secure. The team wore masks and were all very friendly and easy to communicate with. Highly recommend them for your move!

Great! I've moved more times than I'd like to count and my move with Roadway was by far the easiest and smoothest. They were kind and efficient and fast and stress free. I'm hoping not to move again, but if I do it will 100% be booked with Roadway.

They made moving an absolute breeze! Fast, friendly and safe - it was seriously the easiest move ever. They were on time and handled my items with the utmost care - nothing damaged, they wrapped and blanketed and boxed everything - even my plants made it without a leaf out of place! We didn’t even lift a finger...to the point that we made it to our new place, everything unpacked, (they also assembled the bed!) and organized...we were able to catch the sunset for a cocktail on the roof! We were pretty concerned about moving during a pandemic but they completely alleviated our fears. They wore masks and gloves the entire time, and kept socially distant. And they were the nicest guys! We will definitely be using Roadway again. I can clearly see why they’re the top movers in New York City!

Description of Work
Move across town in NYC