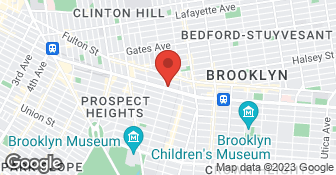 Additional DBAs - Atlantic Ave, Atlantic Exhaust Inc. -- Meineke offers complete Automotive Repair Services for all of your car care needs. Come in today and our trained staff will help identify any problems your vehicle may be experiencing and get your car fixed, running, and back on the road safely. We provide quality Automotive Repair Services from honest and professional technicians to restore your car to top condition. With affordable options and guaranteed customer satisfaction, Meineke continues to be an industry leader in Automotive Repair year after year. Call today to schedule an appointment! ...

Description of Work
They service my car.

In short, NEVER EVER TAKE YOUR CAR HERE, OR LET THESE GUYS WITHIN A MILE OF IT!!! After they diagnosed the problem as a faulty thermostat, I agreed to let them change it that for $400, including a $75 thermostat, $90 for a full flush of coolant fluids, $35 per gallon for 2 gallons of expensive G12 anti-freeze, and the rest for labor. It all seemed quite pricey, but I was in a bind and needed the car, so I paid. Then a few hours later, Ashton called me at work to say after doing the work and driving it, it still overheated and they needed a total of $860 or another $460 additional, in order to change the water pump $150 for parts, plus another few hours in labor. I was shocked, but after talking to friends and some other garages, realized they were not only price gouging me on the parts, but they were playing the up-sell game, since it was their responsibility to diagnose the problem completely and give me an estimate from the beginning, not find the problem by elimination at my expense. After I brought this to their attention and quoted some other prices to them, Ashton agreed to knock off the labor costs for the first thermostat job, bringing the price down to $740, and I talked him down to an even $700 all inclusive. He acted very nice and said he'd even throw in the timing belt for free while he was changing the water pump... but only because I suggested to him to change it, after reading online that a faulty water pump with a leak would corrode the belt and it was easy to change at the same time. Fake generosity, as I later found out they charged me for the timing belt on the bill. And the so-called free labor from the first job was really their fault anyway. And finally, it came out to $762 with tax, since they lied when they said the price was all inclusive for $700. Beyond this, I dropped the car off on a Wednesday, and despite their promises to have it ready the same day, they didn't finish the job until Friday afternoon. And when I paid the bill, Larry, their other mechanic argued with me about the warranty, not wanting to give me more than a 90 day warranty on parts, but none on labor. Finally, one of their mechanics tried to obviously drum up business by telling me about other problems with the car, including a noise and need to replace front struts. Sure enough, when I drove the car out of their garage, it began making a loud metallic thudding noise in the front left side, which it had never ever made before. Though I'm no mechanic, I'm quite sure they did something to the struts, mounts, or CV joint to exacerbate what might have been a minor issue before. Being upset about their treatment, I inadvertently forgot my receipt at their garage, and when I called later to get a copy, they made excuses about their fax machine, then swore they mailed it, but never did.

Description of Work
In short, NEVER EVER TAKE YOUR CAR HERE, OR LET THESE GUYS WITHIN A MILE OF IT!!! After having an overheating problem with my car, I took it to Meineke on Atlantic Avenue, since it was quite urgent and I didn't know where to go. They did the following work: New thermostat Flush of coolant fluids New coolant fluids New water pump New timing belt See the review below. I hope no other customer will have to suffer the dishonest experience I had with these guys.

All statements concerning insurance, licenses, and bonds are informational only, and are self-reported. Since insurance, licenses and bonds can expire and can be cancelled, homeowners should always check such information for themselves.To find more licensing information for your state, visit our Find Licensing Requirements page.
General Information
Free Estimates
No
Eco-Friendly Accreditations
No
Payment Options
Discover, MasterCard, Visa
Senior Discount
Yes
Warranties
Yes

No, Meineke Car Care Centers Inc does not offer a senior discount.