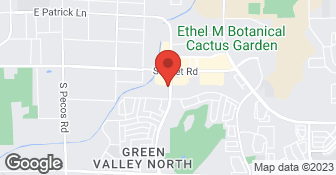 Description of Work
We are new to the Henderson area and looking for a dentist, thanks to Angie's List we found Dr. Sanford. The staff was very pleasant to work with the doctor extremely knowledgeable and experienced and the overall office atmosphere very nice.

I was told by at least 2 large dental groups in Henderson, NV that I needed a "deep cleaning" The charge for this service, with all the extras they charge for, for all 4 quadrants is about $1000. Also, the service needs to be done 4 times a year for a total cost of $4000! Ouch! Also, my research showed that this process may sensitize your teeth so you cant tolerate hot or cold on the teeth. These dental groups also refused to do a routine cleaning. So since 2005, I didn't have a cleaning done up till the time I visited Dr Sanford's office in about 2014. He told me my gums were fine and a routing cleaning was all that was necessary. His charge was very reasonable. So I have had cleanings twice a year and my gums and teeth are healthy. The charges for two cleanings per year have amounted to less than 10% of what the other clinics wanted to charge for unnecessary and risky procedures. The cleanings, also, were done without any local or general anesthesia, were thorough and were done with very little discomfort. The other dental groups told me I would have to have, in addition to the $4000 annual charge, at a minimum,4 quadrants of local anesthesia. I don't have a figure for that additional cost, but based on their other charges I figure it would be at least $75 to $100 per quadrant or a total of $300 to $400 per visit with four visits per year in addition to the annoual cost of $4000. Dr Sanford also had to repair several fillings done by these other groups, that were done inadequately. These were at a very reasonable cost. Dr. Sanford, also is very gentle and is the most pain free dentist I have ever visited. I give him my highest recommendation. He has my complete trust. Also, I am a retired M.D., (lorthopaedic surgery).

I like him as a dentist. Scheduling is great there.

Description of Work
Dr. Brian Sanford has been my dentist for 5-6 years.

I've been going to him for years and I've never been disappointed every time. All the people and the employees do a wonderful job. He's great.

Description of Work
Dr. Brian Sanford is my dentist.

Description of Work
Dr. Sanford is my dentist.

Dr. Sanford's office is clean and the people are friendly. I have been using him for about 3 years.

Description of Work
Dr. Brian G. Sanford is my dentist.

He is very personable and nice. I have gone to him for nine or ten years. He does good work. I've had other problems with my teeth, and he has fixed those problems. He's very good.

Description of Work
He is my dentist. I last went for a regular check-up.

All statements concerning insurance, licenses, and bonds are informational only, and are self-reported. Since insurance, licenses and bonds can expire and can be cancelled, homeowners should always check such information for themselves.To find more licensing information for your state, visit our Find Licensing Requirements page.
General Information
Eco-Friendly Accreditations
No
Payment Options
Check, Visa, MasterCard, American Express, Discover, Financing Available

Dr. Brian G. Sanford is currently rated 5 overall out of 5.

No, Dr. Brian G. Sanford does not offer eco-friendly accreditations.