With Angi since November 2008 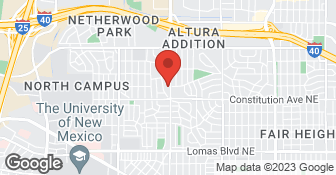 Albuquerque restorative dentist Dr. Tim Kelly believes everyone deserves a healthy, pain-free smile. Dr. Tim Kelly's practice is unique in that he offers long-term relief from TMJ disorder. He uses cutting-edge technology and techniques to analyze the patient's bite, which he can then balance through restorative dentistry techniques. For patients wishing to enhance the appearance of their smiles, we offer cosmetic dentistry services like teeth whitening, porcelain veneers, smile makeovers, porcelain crown, and more! Dr. Tim Kelly's comprehensive approach to dentistry can help you achieve the comfort and confidence that only a truly healthy smile can provide. Contact us today to schedule a consultation....

I have been going to him for the past 4 years. He is a great dentist with a great office staff. Scheduling is easy and I don't have to wait long for an appointment.

Description of Work
I go to Dr. Timothy Kelly and I went to him at the beginning of the year for a routine teeth cleaning and some other dental work.

I saw this dentist for almost two years for preventative care, crowns and root canal. Overall I was not impressed with their practices (billing was the worst). so I left there. When you go through your initial consultation with Dr. Kelly, you sit in his office and look at and quot;before and afterand quot; pictures covering the wall which makes it appear that he's all about cosmetic dentistry. In the initial consultation he pushed the cosmetic stuff even though I said was interested only in exams, cleanings, and fixing any issues. Good grief. His prices are quite high and the front office could never properly get the math right to figure out what I'd owe after insurance. I would pay what they said I owed when I left the office, but get another bill later in the mail. Every single time! I spoke to both the Lori in the front office multiple times and also Dr. Kelly, but they never fixed this problem or even explained why this was happening. I was so aggravated that the last time they sent me an additional bill, I said, and quot;I'll pay it next time I go in for an exam or cleaning.and quot; Instead of waiting 4-5 months until my next cleaning to get additional payment for what was again their mistake, they sent the $60 bill to a collection agency. So, over a bill of about $60, they lost me as a customer forever. I had spent a lot of money there and would have continued, if not for this idiocy. Also wanted to point out, they have no crown-making equipment on site. Dr. Kelly doesn't like it, he says dental labs do better quality work, but that means you have to make multiple trips for a crown (like anyone wants to make EXTRA trips to the dentist officey) and have multiple anesthetic shots and drilling, and put up with a temporary crown as well. All that for the and quot;better quality workand quot; done by a lab. Well, I have had other crowns made in the past with the onsite machine and they are all holding up fine. So I'm not sure I believe it. Overall I was not pleased. I have been to wonderful dentist offices in the past, probably all the more reason I was unsatisfied with Dr. Kelly's office.

Description of Work
I had preventative care, crowns and root canals with Dr. Kelly over a period of almost two years.

The office was under construction when I went in, but the staff was very accommodating. Cleaning was thorough and no one tried to sell me dental work that I don't need. Talked with Dr Kelly after the cleaning and he seems to be genuinely concerned with me maintaining the health of my teeth on my own, since I don't really have any problems at the moment. Up front payment was unusual, but I haven't heard anything from insurance or dental office since the visit so I don't really mind paying up front. As an update much later - Additional charges were sent to the insurance and I did not hear from Dr Kelly's office for 6 months. Then I got a check from the insurance and a bill from Dr. Kelly's office - within 2 weeks of this happening I had a bill collector call me to collect on the bill. Since I consider 1 month to be the minimum amount of time for me to send out bill payments - I had not yet paid it. Needless to say I was very annoyed with Dr Kelly's office and went in personally to pay the bill and get my x-rays since I will not be going back to them. They refused to give me my x-rays.

I have been going to Dr. Kelly for 6 years since I moved here. He was recommended by an elderly dentist/friend who attends conferences, keeps current in the dental field, and knew about my specific oral problems (receding gums due to bad alignment of my teeth). Dr. Kelly is amazing. Yes, he did lots of expensive x-rays when I first arrived (my elderly dentist/friend had warned me that I would need this investigative work), but he presented me with several different options to fix my teeth. It has been a slow journey, because my teeth were really misaligned, but my teeth are almost aligned and my gums are no longer receding. Dr. Kelly is really a scientist--rather than a quick fix (like crowns), he gets to the root of the oral problem and fixes it. He is very precise, but warm and friendly. He is very willing to explain his reasons for all procedures. If I am concerned about cost, he will figure out another way to solve the problem that isn't as expensive. When I first came to him, he had some staff members who were not very professional -- he has replaced them with competent, caring people. This is an amazing, skilled, professional team. I've had lots of dentists in my days. Dr. Kelly is clearly the most concerned about my dental health, most willing to work with my pocketbook, and the most skilled I've ever had--from Boston to San Diego and Florida to Oregon! I think that covers a lot of territory!

Description of Work
The problem: I have very misaligned teeth, receding gums and a tendency to get decay easily so I have to be very careful about brushing and flossing (a difficult task when teeth are so badly aligned). Instead of grafting my gums (as other dentists had recommended), Dr. Kelly figured out why my gums were receding -- my teeth were being pushed away from my cheeks due to the misalignment and the gums couldn't keep up! He has straightened my teeth with braces and aligned my jaw with a dental device called a "mago" saving me from expensive, painful surgery which could have been a temporary solution at best.

It seemed the reason for the first visit was mostly to get a check from you so hold your appointment for the cleaning/check-up. I was able to get right in for the meeting visit but it took over a month to get in for the check-up and I have no committments on my schedule - it was theirs. The check-up was just a normal item but instead of doing a treatment plan they try to get you to go for a expensive scan of your mouth so they can "further evaluate" you situation. My situation is I grind my teeth and therefore fracture them. Accordingly, my previous dentist, who I miss very much, was putting in crowns as needed over time so I wouldn't get hit with a huge bill. This place confirmed what I already knew but really wanted me to go for this scan before they would look further - their comment was that I had insurance and even if it wasn't covered, it would go to my deductable anyway. Also, there is the issue of their billing. They required a $60 deposit on the first meeting to hold my appointment. I thought this was ok but was surprised when I have yet to receive a statement from them showing how it was applied or how the insurance paid their bill. (I know the insurance has already paid some of it as I have received the explaination of benefits, and the charges were very high.). They also made a big deal out of setting my 6 month check-up date and telling me I would be billed if I failed to show for it. Overall, I felt this provider was nothing special and more concerned with billing than anything else.

Description of Work
Initial vist was just a meet and greet sort of event. The next visit was a cleaning and check-up

They are very good. The staff is friendly and he is extremely knowledgeable. They are quite professional and they have a complete approach to dental care. My daughter goes to him as well. The prices are quite reasonable.

He does very good work and he is highly trained in bioestetic dentistry. He is very knowledgeable and professional. His office staff is helpful and polite. I would recommend him.

Description of Work
I go to him because he does general dentistry work for me.

Welcome to Wondra Dental Care, P.C., a leading dental care practice in Rio Rancho, New Mexico. We understand the importance of good dental hygiene and oral care and are committed to providing you the best care in a pleasant environment.  …

Peak Family Dentistry offers a broad range of general, cosmetic, and implant services to aid in your oral healthcare needs . As part of our commitment to overall health and wellness, Dr. Adams and her team have been trained to screen for signs of OSA that present in the mouth. Don’t be alarmed if the next time you’re in, Dr. Adams starts asking you questions about your sleep or if anyone has ever told you that you snore? So be honest because your answers just may help prolong your life! There is 1 dentist at this site. Surgery is performed at this location. To see if a dentist is board certified visit www.abgd.org  …

All statements concerning insurance, licenses, and bonds are informational only, and are self-reported. Since insurance, licenses and bonds can expire and can be cancelled, homeowners should always check such information for themselves.To find more licensing information for your state, visit our Find Licensing Requirements page.
General Information
Eco-Friendly Accreditations
No
Payment Options
Check, Visa, MasterCard, American Express, Financing Available