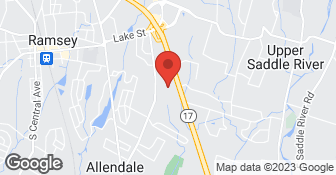 Mark was a pleasure to work with. He made what I felt was going to be a totally stressful situation very pleasant. Fernando and his team were great as well. Very accommodating with me working from home.

Mark, the owner, came to our home in Clifton and impressed us right away with his professional and friendly demeanor. His crew did an A+ job with the (wonderfully lush!) new carpets in two bedrooms. They also carpeted a whole set of steps (and the walls) that lead to the second floor. (This was done for our cats who love to climb the walls and play on the stairs). The work they did on these steps was meticulous and beautiful...it really has to be seen....everything is tucked away nice and neat, and there are beautiful lines around the wood molding, which frames the stairs. I will admit that there was a hiccup with the ordering process but Mark recovered quickly and then exceeded our expectations with the final result. I would definitely reach out to Mark/FCI if we need any other work performed.

Absolutely fantastic service from Mark and the guys, from the initial visit right through to the finished product. We had our entire first floor stripped and stained and it came out gorgeous. The guy were very polite, professional and punctual. Absolutely superb job, would definitely hire again, thank you.

It ended up being a longer job than anticipated, and there were a few unexpected hiccups, however, this company made certain 10000% that we were fully satisfied with the work they did. Their laborer's are extremely nice and trustworthy. Their team leader did a wonderful job making sure that he was in consistent communication with us and that we were fully satisfied. These guys care about making their customers happy, beyond all else. There is no doubt about that.

Description of Work
We needed our kitchen floor tiled.

I had a good experience with them.

Description of Work
They put in new flooring and carpeting.

Marks crew did a great job on my new floors for a great price, very professional and efficient job. The floors look great ! Highly recommended.

They did a nice job.? There was a problem with it, so they resurfaced the whole thing again.? There were a couple of other things that came up, that showed up when they re-sanded the floors again.? They were telling us that's just the way wood is these days, and to replace it would have been a real problem.? In a way we're not thrilled, but he did seem to bend over backwards to try to do the right thing.? I don't remember what they charged us, but the cost was certainly reasonable.? Their price was half of anybody else.? He was very responsive.? This is a hardwood floor and when we looked it up, it wasn't specific what it was.? No, we wouldn't use them again in the future.? Generally, in the last few years anybody we've hired, we've found them through Angie's List because it's been a very good indicator, except for the floor guy.? Everybody else we've hired from Angie's List is great.? We definitely are not going to re-do the floors.?

Description of Work
This was for hardwood flooring.

spectacular and swift, plus a two year warranty was included to ensure any wrinkles or edges that come undone are redone

Company sent representative to my house for estimate. It was very easy as they had all the material for selection. They completed the job within 3 days as promised. Very exceptional customer service. Highly recommend.

Description of Work
I needed floors & carpet replaced in my basement.

My experience with the Floor Coverings International of Upper Saddle River, NJ has been aggravating from the beginning until the end. I have had them lie about appointment times, lie about flooring and materials being in when they weren't, and completely disregard that I may have things to do or worry about besides waiting around for them. It's apparent that there's a lot of miscommunication between the office and workers, which was highlighted to me today when I was supposed to have flooring installed and it turns out they had scheduled it for another day. This is not the first time this has happened. The flooring itself in 2 out of the 3 rooms they have worked in has come out great quality, but they have left marks on one of the floors and gunky glue on my newly painted wall. Do yourself a favor and hire somebody that will value your time.

Description of Work
There was luxury vinyl flooring put in three rooms of my house.

The floor installation was VERY difficult because our floors were uneven - as much as three inches variation in places. Although the bid was the highest of six for both projects, it was the ONLY firm that assured us that they could/would do the job and that we would be pleased with the work. They did an excellent job under the watchful eye of Mark, the company owner. Although the tile job was not as difficult as the floors, it involved challenges in burying electrical wiring in a concrete wall. I would recommend this company to anyone concerned about respecting a house with historic considerations under the rubric of "you get what you pay for."

Description of Work
The company installed hardwood floors throughout the first floor of our 110-year-old house and a tile backsplash in the kitchen.

How did it go? I think it went great! You should hear the compliments I get...even from a plumber. Mark & crew refinished the hardwood on the main floor (oil based), staircase and replaced boards. The boards that needed to be replaced were due to a deep burn mark. I can surely say there was excellent workmanship as you can't even notice where the boards were replaced and refinished. The men Mark works with have been refinishing floors with him for 10 years - I felt very comfortable having them in my home (very important to me as a stay at home mom). As part of the same main floor project Mark suggested that we replace the old kitchen linoleum with 'luxury vinyl tile'. It was an excellent suggestion - it looks great and definitely classes up the kitchen area. (If I hadn't taken his suggestion I would have regret it and had to have him back to do it anyway.) I would also like to share that this is actually my 3rd floor project with Mark and Floor Coverings International. I have also had them replace wall to wall carpeting in the basement and install a staircase runner. I smile when I see my shiny floors - Janice!

Description of Work
Floor Coverings International provided excellent service from start to finish. From the consultation to the service, they were absolute professionals the entire time. The client service representative, Margarita, was very timely and efficient in providing proposals and on site visits. I would highly recommend doing business with them.

Everything was done on timely and professional manner. Very clean spotless job. Professional service with follow up call to make sure that nothing was left outstanding. Would definitely recommend.

Description of Work
Replace wood floor upstairs in my house.

The installation was excellent! I couldn't be anymore satisfied. The whole process was great from the estimate down to the installation. The installers took their time with the install, they explained the process and were very courteous. I would most definitely recommend this company.

We set up a day to start and Mark was there ready to work even helped me move some of my junk. and the work was done on time and neatly. They kept the work area clean and were very responsible about keep me up to date on the progress.

Description of Work
He tiled the entire basement floor and steps. It was a great job.

We are the experts for Hardwood Flooring. If you're looking to install a new hardwood floor, or refinish an existing one, you've come to the right place. Please reach out to us directly at (201) 695-8195.  …

Contact SCL Flooring in Ramsey, NJ, to learn more about our comprehensive flooring services, including installation, sanding, and refinishing of wood floors both natural and prefabricated.  …

No, Floor Coverings International North Jersey does not offer warranties.