With Angi since October 2007 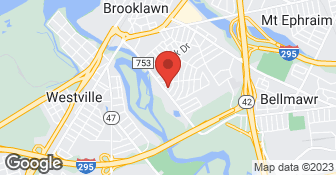 Remodeling and construction company located in Pitman, New Jersey. We are Owner-operated and we don't use subs. Cost is determined by the job, and we don't use travel charges or service charges.  …

Specializing in all phases of remodeling for your home, business, kitchen, bathroom, and more! We guarantee your satisfaction and we won’t leave until the job is done right. We pride ourselves on the quality work we provide, while delivering great customer service! Check out our services offered and call or click to schedule a free estimate today!  …

We at Renaissance pride ourselves on our ability to pull off start - to - finish renovation/restorations completely in house, on-time and under budget consistently. Founded by a carpenter and evolved into something encompassing all trades. We specialize in historic, old, or just plain difficult jobs that scare most guys away. We do the demolition, we do the construction, and we deliver the finished product and stand by our warranty, our word, and our work. Please: $1000 minimum per job.  …

Needed a bathroom remodel done yesterday and in addition, needed it done in one week. Joe came to my home and presented himself very professionally and showed me photos of work he completed as well as references. His price was not the cheapest price, nor was it the most expensive, but right about in the middle. His was the fifth estimate I received. He promised certain things that impressed me....that I wouldn't be without a bath (only one full type in my home) for more than one day and that on the second day, the new bathtub would be installed, allowing me a place to bathe. Also promised everything in one week, right before the holiday. Joe and his crew performed as promised, and not only gave me my new and enlarged bath, but also rearranged the entranceway to the bath and enlarged a small bedroom space which necessitated trim, drywall and paint too. A few things cause me not to give Joe an "A" and that is, the new plumbing leaked to the ceiling of my new kitchen ceiling below which Joe patched but never sanded and painted as promised. He also installed two light fixtures along either side of the new medicine cabinet and each one was a different distance from the cabinet (couldn't be fixed without doing the electrical and drywall over, so I left it), promised to come back to fix any problems but wouldn't answer my calls that I left numerous times on his voicemail, and finally, never returned the key to my front door. I liked Joe, I thought his work was very good for having been completed in one week, that he was a fast worker, but why he refused to call me back I will never understand. I would have called him again to remodel my kitchen and told him so, but because he never called me back as requested, I am disappointed in him.

Description of Work
Remodel and enlarge bath including new framing, drywall, electrical and plumbing, install all new fixtures, tile bath and floor, drywall and paint. Enlarge small bedroom by removing section of plaster wall and opening up space, finishing off with drywall and paint. Contractor supplied all materials with the exception of fixtures, floor tile, bath tile, and paint.

Joe gives you one price and does not nickel and dime you for extras. He has a crew he relies on that he brings in when necessary, but does a lot of the work on his own. I found him to be honest and pleasant to work with. He is very responsive and keeps you up to date on timeliness. There was a minor delay with my job, but for good reasons. I plan on using him to remodel my kitchen next year.

Description of Work
A powder room was completely gutted and re-done. The price is labor only -- I paid for the vanity, toilet, tile, and fixtures separately.