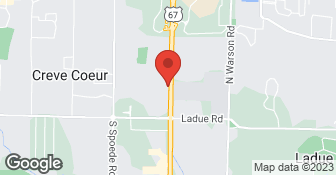 Dr. Craig Anzilotti is originally from Wilmington, Delaware. He received his Bachelor of Arts degree from The University of Notre Dame in 1994. After earning his Doctorate of Dental Sciences from The University of Maryland in 1998, he completed an Advanced Education in General Dentistry residency through the United States Air Force in 1999, and served at Los Angeles Air Force Base until July 2001. He has been practicing at our current location since August 2001. Dr. Anzilotti is married to his college sweetheart, Laurie. They have four children, Anna born in 1999, Liza born in 2002, Mark born in 2003, and Kathryn born in 2006. When not at work, Dr. Anzilotti enjoys spending his time exploring St. Louis’ many attractions with Laurie and the kids. Dr. Anzilotti is an active member of the American Dental Association, Missouri Dental Association, and Greater Saint Louis Dental Society.

It always goes well at Dr. A's office - even if we have to get work done. Dr. A. and his entire staff are very friendly and knowledgeable. They answer all questions and "fill in all the blanks". We have been going to Anzilotti Family Dentistry for many years and would not consider going anywhere else. We have complete confidence in both Dr. Craig and Dr. Chad. They do everything they can to make a trip to the dentist as painless and enjoyable as possible. The total environment is relaxing and reassuring.

My husband transferred to Dr. Anzilotti after years with Dr. Yager and has been pleased with general dentistry services. I brought myself there after we married and had kids. We had previously gone to pediatric dentistry. After three terribly invasive and expensive quotes from pediatric dentists for one of our children, Dr. Anzilotti treated our situation as he would his own. A gentle, non-invasive treatment plan that has gradually improved our child's dental health dramatically without breaking the bank or our children's spirits. The office is always clean, updated, well organized and they treat you like friends. I totally trust and highly recommend Dr. Anzilotti and his entire staff.

As always, my experience in Dr. Anzilotti's office was great. He has worked with other family members, including my mother who has dementia, and is exceptionally patient and considerate. Took a long time to find a good dentist I am comfortable with, but he's the one! His staff is great, dental hygienist fantastic, highly recommend the entire office!

Description of Work
Filling and crown

I have not yet followed up on the course of treatment but I will update everyone on how it goes.

Description of Work
For background purposes, our family became patients of Dr. Anzilloti about 3 years ago when or previous dentist, Dr. Yager, retired after a 20+ year association. We chose Dr. Anzilotti on Dr. Yager's recommendation and have not regretted the choice. This latest appointment was to seal a crown that had an edge chipped. During that process Dr. Anzilotti noted that there was additional damage to the root. He presented multiple options to resolve the problem with approximate costs and his opinion as to the ultimate outcome of each. Very professional and trustworthy.

We have been to several dentists. My husband has been going there for years. What really has sold me on him completely is that we have one family member with serious issues who is very young. With other professionals, we had two or three different opinions for work, which is stressful for the child. This dentist doesn't make a big deal out of things; he makes it easy for the patient. My daughter isn't anxious about going to the dentist because he is very gentle and only does what is necessary.

Description of Work
He is my dentist. I last went for cleanings.

I have been going to him for about five or six years now. He is a great dentist. He doesn't hurt you. They call you the next day to see how you are doing if you had something major done. His whole staff is very pleasant and personable. his office is very clean and neat.

Description of Work
He is my dentist.

Dr. Anzilotti bought my previous dentist's practice after his retirement, and I have been visiting him for 3 years. He is very friendly and honest. He is an excellent clinician, and I highly recommend him. His staff is outstanding. I don t have to wait at the office before going in to see him.

Description of Work
Dr. Craig Anzilotti is my dentist. I had a regular biannual cleaning and examination at my last visit with him.

Dr. Anzilotti always does a great job. He and his staff are very patient and compassionate. They took me into the office on time. Before doing the work, he made sure that I was totally numb. He talked me through each step that he was working on and the process was finished before I knew it. I have confidently referred many friends and will continue to do so.

When you visit our office, your smile is our top priority. Our team is dedicated to providing you with the personalized, gentle care that you deserve. Part of our commitment to serving our patients includes providing information that helps them to make more informed decisions about their oral health needs. Click here to contact us or call 314.961.5866. Additional e-mail - dra@radiantsmilesstl.com. There is one doctor at this site. Surgery is performed at this site. To see if this provider is board certified visit www.abgd.org  …

Anzilotti Family Dentistry is currently rated 5 overall out of 5.

No, Anzilotti Family Dentistry does not offer eco-friendly accreditations.

No, Anzilotti Family Dentistry does not offer a senior discount.