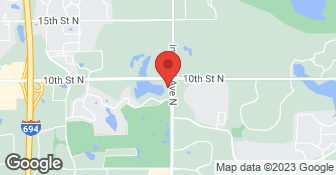 We are a team of highly qualified, licensed veterinary professionals who share a special interest in supporting people and their pets through end of life experiences. We’re proud to introduce the veterinary team that serves the Twin Cities area pet community with home euthanasia. All of our doctors have a similar understanding and appreciation for the benefits of euthanasia in your home. We believe that pets need a gentle hand and voice and people need compassion and support as they go through this experience. We are knowledgeable, caring veterinarians....

This was the best experience during the worst experience of a person's life. We all know we will outlive our beloved pets, but it is hard to let them go. My little guy had a brain tumor and being that he was 17 years old (!), there was no option for treatment. Our provider was gentle, caring and made this bearable. Thank you so much MN Pets, I will be recommending you to anyone needing end of life care. While it's a bit more expensive than services provided in the vet office, it's worth every penny, you will not regret your decision. Lori S and Trina R

Description of Work
I had my old doggie euthanized

Dr Meridith was so wonderful. She gave us as much time as we needed with our beloved Lola. She was very caring and patient during this heartbreaking time.

Description of Work
My Dog Lola was euthanized

We made the difficult decision to put our wonderful dog of 15yrs to rest. We went first to our vet, but they aren't letting people in because of covid and there was no way we weren't going to leave him there for this. They recommend MN Pets a at home service. At first we didn't like the idea of it happening in our house, but when they said they could do it in the backyard I changed my mind. This turned out to be the best decision we could make. Doctor Tracy was absolutely wonderful, compassionate, professional, patient and understanding. Our dog's last minutes on earth were spent walking around our backyard the best he could, so happy so peaceful. If it was at our vet's he would have been all stressed out, it would have been awful. If you have to make this difficult decision use this service you will cherish the time you have left with your pet in a very special way. Rich

Dr Susan arrived as scheduled. Called in advance and was extremely compassionate and professional. This is the 3rd time since 2012 we've utilized MN Pets and couldn't be more pleased. We sent our 15 y.o. Lab Hubert to Heaven to be with his siblings Satchmo and Scarlett - 2 other Labs. The original "trio.". It was comforting to allow our other dog Louie to go through the process, although tonight, he's utterly confused and lost. Dr Susan gave us time and quiet space to grieve and say our goodbyes, she made a paw print, she comforted us and Louie's curiosity. She allowed us to walk Hubert with honor to her car to send him off. We so appreciate her quiet prescence and support. I can't say enough about the service they offer. I could never part with my pet on the sterility of a Vet clinic. Having soft music, candles and a comfortable and familiar place for your pet to peacefully pass is a blessing. I highly recommend their services.

I can't say enough about MN Pets. From the time I initially contacted them, during and after the procedure, they were nothing but kind, thoughtful, supportive, and professional. Their call center operators were so kind and sympathetic. Our beautiful 12 year old Ruby had been having a rough 6 months and had been going downhill rapidly in the last week. They actually listened to what I had to say and were so supportive and could answer all my questions. I was able to make an appointment within 3 days (my choice). Dr. Diane showed up right on time. We never felt rushed and she carefully made several paw print casts for family members that wanted them. She was so kind. We all got to say our goodbyes, even our Golden Retriever. We said a prayer, and only when we said we were ready, did Dr. Diane administer the sedative. Ruby drifted off into a peaceful sleep. She was so relaxed and seemed to be comfortable for the first time in a long time, breathing deeply and softly. After the euthanasia drug was administered she just drifted away. Afterwards we spent as much time with her as we wanted. Ruby weighed 120 pounds, so there were two assistants with a stretcher to help move her to the van. They were wonderful as well. They carefully folded a blanket on the stretcher for her to lie on, and when we got her on the stretcher, carefully folded another and placed it under her head. They didn't have to do that, but they did. When she left, Dr. Diane asked for a copy of the prayer as well. I was surprised to receive a hand written card from her and the team that mentioned specific things that we shared with her about Ruby. I know she had other appointments that day, but she still remembered everything we told her about our girl. I can't tell you when or how to make that tough decision. But when you do, MN Pets provides a service that is unparalleled. Thanks to all the "Angels" at MN Pets.

Description of Work
Euthanasia and cremation of our Newfoundland dog.

They had no vet who could come to my home and help. The person on the phone was apologetic and called the owner of the service. She called back about 20 minutes later and gave me the news that nobody was available to help. In the time waiting for the call my good old golden started experiencing a nosebleed (he had cancer on his snout) which was extra upsetting as he should have already been at peace. The woman on the phone offered to start calling people who helped them very rarely but were not regular staff. She warned that it was unlikely on a friday night that she would find anyone. At that time I told her I would call my vets and try to figure something out. I never heard from MnPets again until the following Monday evening after I sent the owner an email (she replied to my email). Now, let me be clear. I am a reasonable human. While upset that the appt was missed I was able to get past that. What the real issue is the response to this error by the company. A few things could have made this better: ~A call from a trained vet in the moment to make an assessment of my guy to see if this could wait, even a day or two. ~A call from the owner or manager (unsure if these are two different people) to apologize and see what could be done to make this better. ~How about a follow up call to see if the dog was able to be put down at all over the weekend? I think that being humble is difficult. I get it. But please. A phone call, an apology, truly caring about your clients...those things may be old school but they go along way. After receiving a reply to my email in which the owner ONLY apologized for the scheduling mistake and not the fallout I waited for any more communication before launching this review. It has been just over a week and I have received none. Disappointment is a word that doesn't go far enough to describe how I feel about this situation.

Description of Work
I made an appt with MnPets to have my dog euthanized at home. I called on a Wednesday. I asked for the latest appt on that Friday. It was booked for 5:15pm. At 5:30 when they weren't at my house I called. There had been a scheduling glitch and my appt was missed.

Very well - the admin staff was very caring, professional, and helpful in scheduling a time, the Vet was on-time, caring, extremely professional, didn't rush anything, and most importantly was able to finally put my very loved dog to rest painlessly. The vet was very kind in guiding us through the whole process, and they are very respectful with the remains. They have cremation options for the body, and can return the ashes or not if you prefer.

The MN Pets veterinarian came to our home and gently assisted our 16 year old dog to pass away peacefully in our arms in the comfort of his own home. The staff on the phone and vet were kind, compassionate, professional and gave us a lot of peace and comfort a very difficult day.

Our dog suffered a severe stroke at 10am and MN Pets didn't have a vet available to come out until 5pm (as this is typically a more planned service and we had emergency need), but they were very instrumental in helping us find another vet from Blue Skies who came as soon as she could and was the most kind, compassionate person. Friends have used MN Pets and couldn't speak highly enough of them and I'd say the same for Blue Skies. Very thankful for their services and their kind help on that dreadful day.

Description of Work
Home euthanasia for our dog who suffered a severe stroke leaving her almost unresponsive.

Insured
All statements concerning insurance, licenses, and bonds are informational only, and are self-reported. Since insurance, licenses and bonds can expire and can be cancelled, homeowners should always check such information for themselves.To find more licensing information for your state, visit our Find Licensing Requirements page.
General Information
Free Estimates
No
Eco-Friendly Accreditations
No
Payment Options
Check, Discover, MasterCard, Visa, PayPal, American Express, Financing Available
Senior Discount
No
Warranties
No

How is MN Pets overall rated?

MN Pets is currently rated 5 overall out of 5.

What days are MN Pets open?

No, MN Pets does not offer free project estimates.

No, MN Pets does not offer eco-friendly accreditations.

No, MN Pets does not offer a senior discount.

Are warranties offered by MN Pets?

No, MN Pets does not offer warranties.

What services does MN Pets offer?