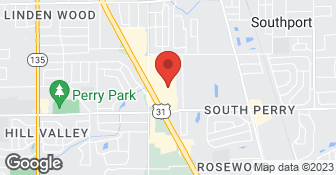 We have a care plan where we pay $112 a month and both dogs are covered. All others things discounted at 15%. We've been using them for probably three years now.

Description of Work
We went for the annual check up.

They're caring and friendly. They seem to be sympathetic to your needs and try to help out on the price when they can.

Description of Work
I started using them when my dog was having teeth problems.

Description of Work
My wife took her dog for grooming.

I do drop off appointments as my dog is stubborn and doesn't like cooperate while I'm in the room. Once they are completed with the check up and shots they call and let me know she is ready for pick up, usually within a couple hours. The tech and doctors are always informative of any findings and take good care of my dog.

Description of Work
Yearly Shots and Comprehensive Check up

They are very nice, very compassionate and they love my animals just as much as I do.

I'm new to the area and transferred the records from the old location to here. There was a bit of a wait but it was entirely understandable and they were very nice about it. My cat isn't the nicest around vets, but they were able to take care of her without a hitch. Since I'm part of their payment plan the entire visit didn't cost me a thing. Highly recommended!

not well. This clinic used to be ok. We have been going there for 10 years plus. Now the drs have all changed for the most part and the present drs are completely inept. We also had a $5000 bill from Ivec because of misdiagnosis. We were told that blood work came out fine and he had a stomach problem. The next day when the dog got worse we found that they did not do the blood work after all, my dog had fallen through the cracks. Had my Snoopy gotten the attention we were told he got, he would still be here with me today. So all in all, if your pet is really sick this is not the clinic you want to take them to. WE, AND OUR 4 DOGS AND 8 CATS, WILL NEVER BE BACK.

I call and make my appointment or they call me to remind me and set one up. I get there a bit early...sometimes I get in early...I don't have to wait very long. I like it because they even make Sunday appointments which are when I like to go a lot. They check over my pet very well...give shots or what procedure we called in for and were done. If I get flea or heartworm prevention or had nails clipped I do pay for that but my appointment on the service plan is paid for....this makes it very nice.

Description of Work
I have 2 pets at Banfield.. a cat which was a kitten and a puppy which is now spayed. I love the convenience of going so close to home and the puppy went first...had puppy shots and worming...we continued until done. Kitten went in June same routine. It's nice to know I can call and run and get their nails clipped or get heartworm/flea prevention single doses at a time. Vets are great as well as reception desk people. I love them all...they love my pets. I did take in my stool samples.....both my pets have been spayed/neutered now...they are a little high on this but I'm on the monthly plan and next year it won't be as high for they are not young and they are fixed.

Appointment was at 2 but I went a little early and got in early...they are great..the receptionests and the vet techs and the vets..they do a througho examine,ask you question on how your pet is doing at home...answer your quesitons on what you need to no...I really love them and its so convient...

Description of Work
I have a new kitten that I took in for her first shots and worming..they also put Revulution fea and hearworm med on her..I signed up for there plan for I have a puppy on the plan too and they take out a monthly payment..makes it so much easier

It is the more cost effective way to go to the vet. They make me wait around a long time.

Description of Work
BANFIELD THE PET HOSPITAL sees my black lab. She had an ear infection and needed authritis medicine.

I have been satisfied.

Description of Work
I took my pet in to see the groomer.

I like Banfield because on Tues, Thurs and Fri they have open visits for preventive care with no office visit charge. They have good hours, which makes it nice for pet owners as things never seem to happen during regular office hours!

Description of Work
Annual shots for our dog

We had a feeling she had bladder stones again and after a visit, the surgery was scheduled (2nd surgery in just over a year). A few days before the surgery I noticed she couldn't urinate, I took her right in, he "squeezed" her bladder and bloody urine went everywhere. When the surgery was done, they said everything went fine, when husband went to pick her up that evening he was told she wasn't urinating and urethra must be clogged; they tried to flush it during surgery and couldn't but thought it would eventually come out! Since they were getting ready to close and they weren't open 24 hrs. we had to take her somewhere else ASAP....She had to have another surgery during the middle of the night from a more reputable/respectable animal hospital, and it was amazing how many more stones they removed from my dog that he didn't get (some as big as a dime), and they were able to get the ones out of her urethra. When we approached him about this, he was very defensive and insisted he did nothing wrong. When we contacted Banfield headquarters there was nothing they could do because he owns that particular franchise. The total price overall is irrelevant compared to what our dog went through.

Description of Work
Bladder stone removal from female Pug; her first surgery went well so we went back to them.

We took one of our dogs to the clinic to be treated for allergies and at the same time, picked up the cremains of the other dog. It went well, the Dr. was able to identify and treat the problem immediately.

Description of Work
Dr. Johnson has been caring for our dogs for a few years for wellness visits, immunizations and health problems that may arise. He went above and beyond carrying out testing for our oldest dog, Red. When it became necessary to euthanize her, the entire staff was helpful and sympathetic. Banfield also uses an excellent subcontractor for cremation. We will continue to use Banfield.

They are nice. They make my puppy happy and comfortable.

Description of Work
I have an insurance plan with this vet. Every month they take out $22 to cover my Schnauzer. This includes office visits and check ups.

Staff was welcoming and informative. Explained what office fees there were, as well as what wellness plans they provide. Vet was knowledgeable and handled the pup very well. Answered questions about things like housebreaking. Times office is open is valuable to us.

Description of Work
Vet services for puppy. Price includes wellness plan of 12 months of well visits and needed vaccinations, as well as office visits for illness and phone consultations.

Excellent! Dr. Peter Johnson and his staff are an asset to the Banfield Pet Hospital franchises located within Pet Smart retailers. This location is in Greenwood, Indiana. I have been taking both dogs to Dr. Johnson for the past 4 years and he continually provides outstanding veterinarian care. He has a true passion for caring for animals and is always provides in-depth testing, blood work, analysis, and helpful suggestions on how to extend the life of my furry friends. I am always confident when I leave my dogs for care with Dr. Johnson and his staff that they will both receive excellent care and compassion. I subscribe to the Banfield Pet Wellness Insurance Plan, too which provides excellent preventative care. I highly recommend Dr. Johnson and the Banfield Optimum Wellness Plan for any member's pet whether they be a puppy/kitten or mature dog or cat.

Description of Work
My female Beagle and male Sheltie were both due for their annual wellness exams which includes vaccinations, dental, blood work, etc. Dr. Peter Johnson conducted the wellness exams while also extracting four teeth from the Sheltie who has a history of dental challenges due to abuse from a previous owner. Both dogs also received annual vaccinations including Bordetella, Cornona Virus, Distemper Parvo,Giardia, Leptospirosis and Lyme.

VERY GOOD EXPERIENCE. DR. JOHNSON IS VERY CARING AND GOOD TO WORK WITH; HE TAKES CARE NOT TO ORDER MEDS OR TESTS THAT ARE NOT NECESSARY. A SIMPLE OVER THE COUNTER TREATMENT SOLVED THE PROBLEM.

Description of Work
MY DOG HAD A NOSE BLEED AND I CALLED MY VET AND THEY MADE TIME FOR TO GET HIM IN RIGHT AWAY.

I USE THEIR WELLNESS PLAN AT 19.99 A MONTH. THEY HAVE A DROP OFF SERVICE. NO MORE WAITING. YOU DROP OFF AND PICK UP AT YOUR CONVENIENCE. THIS IS REALLY HELPFUL FOR ME BECAUSE I HAVE A CAT ALLERGY AND VET OFFICES ARE VERY DIFFICULT PLACES FOR ME. THEY DO THE EXAM AND SHOTS AND GIVE A NICE DETAILED REPORT. NO WAITING WITH THE DOG AND KIDS. WONDERFUL.

Description of Work
ROUTINE CHECK UP AND SHOTS.

Banfield Pet Hospital - Greenwood is currently rated 4.6 overall out of 5.

No, Banfield Pet Hospital - Greenwood does not offer eco-friendly accreditations.

No, Banfield Pet Hospital - Greenwood does not offer a senior discount.