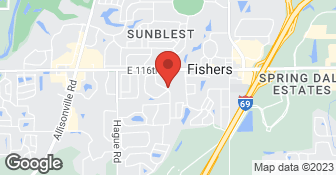 Cost determined by the job....

They charge $16 per visit. I left on Friday and I came back on Monday, so they just handled Saturday and Sunday. I wouldn't know for punctuality because I'm away. I've used them for years so they're familiar with where I keep my cat supplies.

Description of Work
I have 2 cats & they just feed them and change their litter box.

We have had Purrfect Pet Sitting in to check on our cats for numerous trips over the years. I know that the cats will always have fresh water and food while we're gone and we'll come home to no surprises outside the litter box. Every visit Angela gave the cats a can of moist cat food on a plate as requested, then she takes out the litter and food waste so the house does not reek of stale food or kitty waste. This trip we had a contractor finishing a remodeling project during the day while we were away. We told Angela the hours he might be working in the house so she could avoid him if it made her uncomfortable. Instead, when we came back the contractor talked about our lovely friend who came to care for the cats. Angela is kind and professional.

Description of Work
We had Angela feed and water our cats and scoop kitty litter every other day while we were on a trip.

They r fabulous. Our dog "cheddar" always acts so calm and happy when they have been here. Spends time petting and caring for her. I never feel bad about leaving her.

Description of Work
Walk our dog and spend time with her

After I had back surgery, I used Purrfect Pet Sitting to come to my home |to care for my 3 cats (feed and water them and clean out litter boxes). |They did an excellent job, and the cats responded to them very well. Not |sure of the dates.........

Everything we have ever asked Purrfect Pet Sitting to do - they have happily complied. We have even called them periodically to get a verbal update on how things are going.If they do not answer their phone I gladly leave a message. They have always been quick to communicate back to us. I really believe there is not a better company out there!

Description of Work
Where do I begin? My husband and I have used Purrfect Pet Sitting from almost the companies inception 10 plus years ago. We called upon The Caseys because they were recommended by the previous pet sitter who was at the time moving out of state. We owned a cantankerous bulldog, Chet, and a meek chihuahua, Karmin. The bulldog was so obnoxious that nobody else would watch him. Angela and Mike did not bat an eye. They came over introduced themselves, acquainted themselves with both dogs and never once had any problems with the bulldog's attitude. We left a laundry list of chores for them to do. Our animals were on special diets with their food, they slept in special areas, they had indoor as well as outdoor toys. We asked them to collect our mail, to turn different lights off and on periodically, to open and shut different window blinds. Every inch of detail was paid attention to. We now have a new set of animal babies that they take loving care of - 2 dogs and a cat. Never have we been more satisfied in our professional relationship with a company! We fully and whole-heatedly recommend Purrfect Pet Sitting to anyone that wants loving care for their pets. We have trusted them for all these years and would never consider another company.

This company is wonderful and very responsible. I wanted a company that was interested in getting to now my dogs instead of trying to impress me. When they came to the house to meet the dogs, my dogs loved them right away. My dogs are usually very picky about who they like and let get close to them. When I returned from being away, I found my dogs happy and well taken care of. They went above and beyond what they were suppose to do. I will definitely be using them again!! Lawana Davenport Indianapolis

Description of Work
My husband and I were going out of town and needed to hire someone to watch our 3 dogs and 1 cat. I went to Angie's list and found Purrfect Pet Sitting. I called and explained that I needed some one to come over 3 times a day to let my dogs out and then feed them in the morning and evening. I also needed them to make sure the cat had food and water, plus clean the litter box. The owner Angela Casey sit a time up to come over and meet my dogs and cats. I went over all the paperwork she wanted me to fill out and her prices. I was very happy with the price. We set everything up and I wasn't worried about anything. When I returned I found my dogs and cat very happy and well taken care of. They did everything I asked of them and did it within the time range I wanted. They even left me notes every day about how their visit went. I thought that was very cool. Lawana Davenport Indianapolis

I write this review because my cat almost died by their neglect. My dispute has been with the owner in the lack of business responsibility and communication. I found a new pet sitter for the market rates and who is performing above expectations.

We had nothing but problems with this client since she hired us in October. So, we're not surprised about the bad rating. We went above and beyond for this client. Unfortunately, this is another example of someone unappreciative of the hard work and dedication of our pet sitters. Her cats are ill and get sick a lot, including urinating on her kitchen counter and outside of the litter boxes. It took an hour each time our pet sitter was there because of the overwhelming amount of mess that had to be cleaned. We did everything for this person, and her cats, and could not make her happy. She complained about everything, including our rates. She tried to hire one of our pet sitters out from under us, and at a rate that wasn't even worth this person's time. Our pet sitter politely declined and immediately informed us. We have the email, which this client sent to our pet sitter, as proof. After receiving several rude emails from this client over the course of a few months, we politely referred her on to another pet sitting company. We were not fired. When we did care for her cats, it was just one day a week. An accusation of neglect is totally unfounded.
5.0

They are warm, caring, and go above and beyond.

Description of Work
They take care of our dog.

Purrfect Pet Sitting has been absolutely WONDERFUL and I haven't worried about our two boys since we went on vacation. Shauna has been SUPER keeping us informed about what the boys are doing, how their appetites are, and whether they are playing or not. She also offered to brush the boys because they were shedding a little so of course I told her that would be great. She has gone above and beyond what we expected and has gone so far as to text us each day she visits to let us know how things are going and has even sent photos of the boy watching her clean the litter boxes and playing with their toys. We would RECOMMEND this company to both friends and family.I have not worried once about how everyone is doing because I KNOW they are in good hands!

Description of Work
Feeding and playing with our two cats and keeping the litter boxes cleaned every other day.

Thank you so much Member. We appreciate the feedback!

Purrfect Pet Sitting is currently rated 4.8 overall out of 5.

No, Purrfect Pet Sitting does not offer eco-friendly accreditations.

No, Purrfect Pet Sitting does not offer a senior discount.

No, Purrfect Pet Sitting does not offer warranties.

Are there any services Purrfect Pet Sitting does not offer?