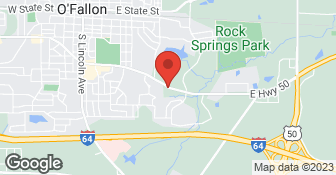 Description of Work
Regular dental checkup. These always go well. I am given a thorough explanation of Dr Martin's findings and excellent instructions for general care and any special issues. He always listens to my concerns and answers all my questions.

I have been a patient of Dr Martin for several years and have always found him to be very competent and caring. The staff at Spring Valley Dental Clinic is also excellent.

He does not take himself as "call me doctor whatever". He introduces himself and he says "call me Lance". He is not a person who takes himself terribly serious but he does good work. They are only open Monday to Thursday but for emergency they do have dentist on call. It is a relatively good practice.

Description of Work
I go to Spring Valley Dental Group and I see Dr. Martin for dentistry.

During my first visit to Dr. Ames, I noticed that he had advertisements all over his office for white fillings. When he looked in my mouth, the only things he commented on were my silver fillings. I was immediately suspicious. He said that I had new cavities forming around all of my old fillings (the silver ones!) and that I had a really bad cavity on one back tooth. After he left, I thought about it and asked the Hygienist if she could show me the X-Rays. She got a very scared look on her face and said she'd be back. Immediately there was the doctor with a very angry look. I asked him to show me on the X-Rays that were taken. He was immediately defensive, stating (and I quote) "I think we can both agree that you are not a doctor and have no understanding of X-Rays." That confirmed that I didn't really have any cavities, he just wanted money. He also said that since I was denying his care, I would have to sign a form that stated that I was doing so. Since I was new to the area, and I liked the hygienist (she did a thorough job) I decided to give them one more try. On my second visit, the office was late, disorganized and rude. I ended up needing to go the restroom and notified the receptionist that I was doing so in case I was called while I was in there. About 20 minutes after the restroom visit, I went back up to the desk and asked when I was going to be seen. She looked at me like she had never seen me before and that she had put my chart away because I wasn't there when they called me. I told her that I had signed in and also notified her that I was going to the restroom, and she stated that their computer system was down and so she didn't get to check me in. This time, I had new X-Rays taken-but only of the side that he said had the big cavity from the first visit. He remembered me, and was rude right from the start. He took out the X-Rays and I asked what he saw on them. He started throwing around biological vocabulary that he knew I wouldn't understand and started leaning the chair back so that I couldn't see the X-Ray. I told him that I didn't understand what he was talking about, and he leaned over me in an attempt to be dominating and said: "I know. But you like to question things you don't understand." I told him that yes, I do like to ask questions, but that is my right - and it's how I understand what is going on. At that point he told me to get out of his office and never come back. This dentist is definitely the worst dentist I have ever gone to, and he's not a nice person either.

Description of Work
I went to this dentist twice, and had a negative experience each time. The provider was incredibly rude and unprofessional. He actively sought to intimidate me by being confrontational and insulting when I was lying in the chair. He seems to forget that people are paying customers and have the right to ask questions in an effort to understand what is going on. I will never go back, and I caution anyone who is thinking about going there.

I've seen him for years professionally. He is compassionate and gentle. The staff is also very, very good. They are very helpful, cheerful and compassionate. I will absolutely continue to see him.

Description of Work
Dr. Martin is my dentist.

Description of Work
I broke a tooth and call Spring Valley out of the book. They accepted me as a new patient and saw me the next day. I received a pain-free crown. I saw Dr. Lance Martin and liked him very much. The front office was very helpful also.

We’ve been seeing him for about twelve years.

Description of Work
Dr. Ronald Ames is my dentist. I go general dentistry.

Description of Work
Dr. Lance Martin is our dentist. My husband just had a crown last week.

He is gentle, pain free, and very attentive. His front desk is very good at scheduling me in, I can get in very quickly and they are very easy to work with.

Description of Work
Dentist Lance Martin has been my dentist for about eight years.

When you visit our office, your smile is our top priority. Our team is dedicated to providing you with the personalized, gentle care that you deserve. Part of our commitment to serving our patients includes providing information that helps them to make more informed decisions about their oral health needs. Click here to contact us or call 314.961.5866. Additional e-mail - dra@radiantsmilesstl.com. There is one doctor at this site. Surgery is performed at this site. To see if this provider is board certified visit www.abgd.org  …

All statements concerning insurance, licenses, and bonds are informational only, and are self-reported. Since insurance, licenses and bonds can expire and can be cancelled, homeowners should always check such information for themselves.To find more licensing information for your state, visit our Find Licensing Requirements page.
General Information
Eco-Friendly Accreditations
No
Payment Options
American Express, Check, Discover, MasterCard, Visa
Senior Discount
Ask for Details

Spring Valley Dental Group is currently rated 4.6 overall out of 5.

No, Spring Valley Dental Group does not offer eco-friendly accreditations.

No, Spring Valley Dental Group does not offer a senior discount.