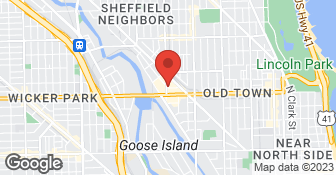 Lincoln Park Smiles provides quality aesthetic, cosmetic, general, reconstructive and implant dentistry. Our patients value our exceptional care, high level of skill and professionalism. Whether someone needs help fixing their teeth or just maintaining optional dental health, we are satisfying people who are eager for a great smile every day....

See above great results. Great great, explanations of the science. A dentist with superb skills. Plus having the patients interest at heart. Root infections eradicated, crown replaced and great dental prophy.

Description of Work
I had a complex root infection issue and occlusion issue that Dr. Jack Manikowski both diagnosed and treated. After a brilliant scientific explanation of the problem and possible needs for further testing, he sent me to a superb endodontist, Dr. Fayad. Later Dr. Jack fixed a fractured crown with a replacement - the best dentistry I've experienced. Being a health professional myself, I'm clear on those with outstanding knowledge, enthusiasm and patient's interest at heart. Great experience. Great staff. Dental hygienist Jackie was superb.

She have been going here since June of 2013. She says they are very good and she likes everything about them so far.

Description of Work
My wife went in for an adjustment for her Invisalign.

[removed member name], Thank you for the positive feedback! We really enjoyed meeting you and having your wife as a patient. Hope to see you soon!
5.0

Very professional. Dr spent a lot of time examining my teeth and explaining what needs to be done. Jackie did a phenomenal job with the dental cleaning. Will definitely come back.

(Member name removed), It was a pleasure having you in the office! We are delighted that you had a great experience and look forward to having you back as a patient. In the meantime please let us know if there is anything we can do for you. Thank you for helping spread the word :)
4.0

I went in for an exam, teeth cleaning and X-rays. Their X-ray technology wasn't cooperating that day so I didn't get the crazy portion of the deal (though they said that they would provide the service at a future date for free if I wishes.) Still felt like a good deal to me. They were friendly and helpful, I'd likely return.

[member name removed], We are happy you were satisfied with your visit despite our glitch with technology! We look forward to having you back and hope there aren't anymore glitches! :)
5.0

She is almost done and is loving the way her teeth look. I must say results have been better than we expected. Dr. Karina has been great from the beginning! I'm very happy with the treatment and highly recommend Dr Karina.

Description of Work
This was for complete Invisalign Treatment for my teen daughter.

Thank you so much for the kind words! It is always our goal to make our patients happy with our clinical care and customer service. We appreciate the feedback!
5.0

My wife and I wanted to have concurrent appointments and that was not possible but we were able to schedule appointments one hour apart, which was very convenient. The office is modern but not cold or clinical. It's somewhat like a spa, but everyone from the receptionist to the medical staff were extremely friendly. Because I arrived an hour before my appointment, I was able to see and hear many patients arrive and leave. More than one was greeted with a warm hug and a sincere greeting using their first name. The receptionist was extremely kind, but the reception area is rather small, the furniture made of plastic and there are no magazines, televisions or distractions (although there was WiFi). None of that mattered to me, but it might to someone else. Jackie was a fantastic hygienist. I can't say I've ever had a bad experience with a hygienist, but Jackie stood out as exceptionally competent. During the X-rays, exam and cleaning, she gave a running commentary about what she was doing, the tools she was using, what she was observing in my mouth and what she noticed that was good or bad (mostly good!). She asked pertinent questions about my dental history, habits and then gave me feedback on what I could change or do differently. Everyone tells you to brush and floss or you'll lose your teeth, but Jackie took it a step further and explained how periodontal disease in particular manifests itself. She explained how it starts, what inhibits or accelerates its progression, and what you can do about it. For someone who is very curious like myself, this was fascinating detail. Moreover, because I usually need to understand why something is important before I'll take it seriously, I think this really convinced be more conscientious about flossing and brushing technique. For someone in need of more soothing care, I think she would have responded differently - less color commentary, more gentle encouragement - but this was perfect for me. Dr. Jack followed up with more assessment and feedback. He took digital pictures of my teeth and mouth which no dentist has ever done before. As you might expect, he put these on a computer monitor to show me different things that concerned him. Being able to see the effects of grinding your teeth or inflamed gums was very powerful. Moreover, as I said before, I like to have things explained to me, and Dr. Jack was great at that. He also did an oral cancer screening using a type of camera that was new to me. It was quick and non-invasive and I appreciated the thoroughness of including it. At this point, I need to highlight something really special. When we were talking about my possible tooth grinding, Dr. Jack seemed incredibly sincere in asking about my lifestyle and health. In the past, Ive gotten a rote description of the problems associated with grinding or a sales pitch for mouth guards but Dr. Jack went a step further. He wanted to know about my overall health, my stress, how well I was sleeping, and we had a more holistic conversation about the interrelation between health and wellness, exercise and dental care. It was a holistic conversation that really had an impact on me and I was impressed with Dr. Jack's caring and insight. I never felt rushed and Dr. Jack spent an extraordinary amount of time with me relative to previous dentists I've had. I now understand why my wife and I could not be seen concurrently. Dr. Jack can only be in one place at one time, and when Dr. Jack is with you, he's really present, not zipping in and out. Great bedside manner indeed. My entire treatment took two hours - this was probably the longest and most comprehensive cleaning and checkup I've ever had. My appointment started on time and I never waited for anyone once we got started, so that was two hours of consistent care. I'm not a nervous dental patient but there was a relaxing light display on the wall facing me and soothing music playing throughout. It was the first time I didn't wish i had a TV or other distraction suspended above me during the cleaning. My wife and I will definitely go back to see Jackie, Dr. Jack and the rest of the team at Lincoln Park Smiles.

Description of Work
My wife and I needed to have a routine cleaning and checkup. We were both taken care of by Jackie, the hygienist, and Dr. Jack Manikowski, the dentist.

Dr. Jack and his staff are exceptional! His staff is extremely kind and warm. It?s so comforting to walk into such a friendly environment. I originally started seeing Dr. Jack about 5 years ago for my routine checkup and cleanings (referral from a close friend). I have seen many dentists and Dr. Jack is by far the most thorough. I have learned so much about my teeth and the way I should care for them. I came from an office that would just clean my teeth and just send me on my way. NO PREVENTION! I had a lot of work done as a child and through my young adult life. Now it?s time to replace some of these old fillings! Dr. Jack has all the latest technology which puts me at ease. I had several teeth fixed by Dr. Jack who used this really cool technology that could make final crowns in the same day. This meant that I did not have to come back for a second appointment. The entire process was relatively painless. Now I have decided to move forward with Invisalign to straighten my teeth! Dr. Jack and his team have my best interest at heart. THANK YOU LINCOLN PARK SMILES!!!

From the minute you work into Dr. Jacks, office you are well cared for!

Very thorough cleaning. Explained what I need to do to improve.

We are a family run buisness, with 11 team members! We accept all insurance and we file your claims for you! State of the art technology will help make your next appointment more enjoyable. There are 2 dentists at this site. Surgery is not performed at this site. To see if a dentist is certified, visit www.abgd.org.  …

All statements concerning insurance, licenses, and bonds are informational only, and are self-reported. Since insurance, licenses and bonds can expire and can be cancelled, homeowners should always check such information for themselves.To find more licensing information for your state, visit our Find Licensing Requirements page.
General Information
Eco-Friendly Accreditations
No
Payment Options
Check, Visa, MasterCard, Financing Available
Senior Discount
No

We have a wonderful team/network of dental specialists we have worked with for over a decade. Our motto is that we want the best outcomes for our patients. If there is someone that is more competent than us at a specific procedure, by all means we include them on our team!

Lincoln Park Smiles is currently rated 5 overall out of 5.

No, Lincoln Park Smiles does not offer eco-friendly accreditations.

No, Lincoln Park Smiles does not offer a senior discount.

Are there any services Lincoln Park Smiles does not offer?

We have a wonderful team/network of dental specialists we have worked with for over a decade. Our motto is that we want the best outcomes for our patients. If there is someone that is more competent than us at a specific procedure, by all means we include them on our team!