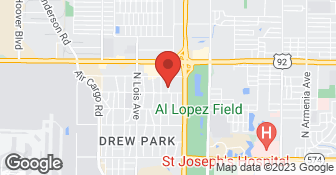 Here at And Services we provide the highest level of Air Conditioning, Plumbing and Electrical Installation, Maintenance and Repair. As a fully licensed and insured AC Service Provider we are held to the Florida Industry Standards, therefore being able to provide you quality work and peace of mind. Our extremely qualified team of employees have had full background checks are certified in their trade as well as being required to participate in continuous training held daily....

With 40 years combined experience, Velocity Air Conditioning has been providing reliable air conditioning furnace and ventilation system installation and services to residents in St Pete, Clearwater, Largo and surrounding counties. As a family-owned and operated company, we stay committed to providing outstanding personalized service to each of our customers. Plus, we only hire the most highly skilled technicians who have been background checked, so you can rest assured that only qualified, extensively trained experts will be installing and servicing your AC system. Call us at 727-754-7956  …

Pro Air and Heat Systems is family owned with over 30 years experience in the industry. Nate certified employees are well trained to handle your home comfort needs. We specialize in service and replacement of all brands. Also schooled in the layout of duct systems. Pro Air and Heat systems offer 24/7 service with no overtime charge. We offer military and first responder discounts along with financing for our customers. Customer satisfaction is our number one priority. Pro air and Heat offer yearly maintenance programs to keep your air and heating system operating at the highest efficiency.  …

Millian–Aire is a family–owned HVAC company that provides quality air conditioning services, and heating services to both the residential and commercial sectors. Having worked in the AC and heating service arena as an air conditioning company and heating company for over twenty–five years, we are proud to offer a wide selection of professional HVAC services throughout the Tampa Florida and surrounding areas. Award wining. Additional phone numbers - (727) 815-8088, (352) 688-1170, (727) 233-7058, (888) 628-0691. Additional fax - (727) 848-0166. Additional DBA - Millian Aire Enterprises Corp. Additional email - howard@millian-aire.com.  …

Absolute worst company I've ever delt with! First of all they bait and switched me. I contacted them fro. an ad for a $79 drain cleaning. They came out and ran a snake down the clean out, this punched a tiny hole in the clog. The city came out later and verified with a camera, that there was just a small hole and the clog remained. I contacted AnD Services to let them know I was unhappy with this ...

Description of Work
Plumbing clean out

AND Services is an awful company to have come out to fix your air!!!!! DO NOT use them! Our ac went out this morning so we called them. They came out (at 12:00) and fixed nothing, just told us what needs to be done, charged $60. We already know the pan needs to be emptied and drain cleaned out. We called back and talked to a supervisor and he said someone will be out in 30 mins. 2 hrs later, still...

Searched on internet for plumbing company. Saw a company that was friendly and affordable. Clicked on that company and was redirected to And Services. Called them and set up an appointment for same day. Was suppose to be out between 2 and 4pm. Waited the entire day and no show. Received a call later and said, they would be out next day between 10 and 12pm. No show no call. Called at 1230 and was a...

Description of Work
Install a fountain in existing pool area

Please do not use this company. I bought a brand new ac from them for way to much money. Found out later I could have spent a few thousand less out the door labor and all. They gave me a “free” one year membership for routine maintenance. They often were late and one time never showed. There were a few calls in which they were to come out for maintenance and they wouldn’t complete the job, so I’d ...

Absolutely Terrible. The unit quit working on day 1 and hasn't worked right since. After the third time I asked for a new unit that this one is a lemon. I asked if I could speak directly with the owner. All of my requests were ignored. Since then, 5 years later it has been nothing but problems. I spent $5,000 cash for just the outside unit and was told by girl in the office that I hadn't purchased a top of the line unit so more or less, what did I expect? They have been here so many times that my neighbors jokingly ask me if I got a new roommate. The unit isn't working as I sit here in tears writing this review. Please, please just thoroughly check into them beforehand. I so wish someone would have warned me. This is awful.

We bought this system from AND6 years ago and it has been a Limon! To technicians came out for the repair within 24 hours of each other gave 2 different opinions and prices. They were complete jerks and treated us like idiots. The system has been terrible and their technicians even worse

And Services, out of Tampa, should be run out of town. I am disabled and live in a small mobile home. The AC Cost me $10,000. In looking at other jobs completed by And Services, AC systems (for large homes) seem to average between $4,000-$7,000. I can't help but wonder (since I have never received the itemized bill I requested 3 times) if the price tag was coincidentally the same (to the penny) as the Greensky approval of $10,000 or if they regularly take advantage, Disabled people. While initially, I was in the hospital when they were to come and finish the job, it has now been 4 months and the contractor has not returned to finish the install. Original work was supposed to take 4 hours. It took 4 days, partly because a "main electrical wire between the house and the outside system" had to be replaced. They shut off my main electric service for 3 days (the AC is on its own system) and ruined the food in both my side by side and deep freezer. I was told they would compensate me $100.00 for the $350.00 in ruined food. That I "should be glad you're even getting that." (CSR -- Edgar) Well, I never even received the $100 promised. From looking at the Hillsborough County Construction Department Records, the Contractor did not take out required Construction Permits for the system replacement--especially when it involved replacing electrical wires. They had me sign giving them permission to apply for the permit and I'm sure I was charged (though I don't know since I cannot get the itemized bill I requested). Since there were no permits, there were No Inspections by Construction Officials. Having been trapped in a house fire, started by an electrical problem which left me hospitalized for several months, I worry that the job was not completed properly. And Services Did Not come back to replace the grate, which they had to "order" or to finish the reattachment of the door to the AC closet. And Services Did Not come back to complete the Duct Cleaning--which had added $1400 to the bill. I've spoken with employees of And Services quite a few times, though "Edgar" who had handled the problems with my job is "not available but will call you back." Yes, and **** will freeze over.

Very good! They're professional and friendly. The electrician is very good.

Description of Work
They install ceiling fans. In the past they install air conditioner system and they are doing maintenance twice a year.

Long review detailing our whole ordeal to get emergency services. Short story: find another place, you'll wait 24 hours for their 2 hour emergency service. This was our first time using AND services and will be our last. We are new to Tampa and didn't have a go-to A/C person. When we came home from work and found it not working and 82 degrees in the house, I got on Google and read reviews. I called at 8:45pm and spoke to someone who advised that it would be 2-3 hours max, and that they'd call 30 minutes before to give us a heads up. At the 3 hour mark I called back because we hadn't heard anything. Was told they'd send the tech another message to call us. Another 45 minutes pass. So, I call again. I'm then told this is their answering service, and they can only send a text/email to the same tech. They have no way to reach out to management or anyone. So, they have no idea if the tech is getting the messages or coming. No apologies, just nothing she can do. We waited 5 hours before telling them to cancel and please have management call us in the morning. We have both a person and multiple pets in our home that are temperature -sensitive. There was a reason I was willing to pay and stay up all night, I needed it fixed right away. Manager calls immediately at 8:02am, and apologizes. However, the reason is the guys were on calls and busy. No explanation why they couldn't call me and tell me that last night. Says he wished they'd let him know, despite the fact that I was told that's not possible. He advised he'll send someone out right away. The tech came right out, was polite, knew exactly what was wrong, and said they could have the part at our house between 12-2 (It was 8:45am at this point). Again, they'll call half an hour before. At 2pm, I call the office and the lady says she thought they were there (they weren't). She calls someone and they tell her their GPS says they will be there in 15 minutes. I told her it'd be nice if they had called, as someone is there waiting for me. Nothing. Fine. Then, in about 20 minutes, I get a call that they will be there in about an hour. I say no, I was told 15 minutes. I'm told they have no idea who I talked to, but they are in Lakeland and it will be an hour. When I say I called the front, I'm told that "well they should have sent you to me". So, we just lose out because of communication. Again, no apologies. They did show up right at the hour mark, and worked on it for a bit. However, the part they brought was defective, so they had to go back out to get another part. They had to go, they said, "right around the corner", but it took them an hour or so to come back. All in all, we went 21 hours without A/C for an emergency services appointment. From 8:45pm to 5:45pm the next day. 21 hours when promised 2-3. They took off 15% for the inconvenience of the overnight issue, never even apologized for the other issues, and the less than $100 they saved us was not worth risking our family and pet's health for this. We just moved to Tampa and have friends and coworkers buying homes here as well. We are trying to get a network of good home repair places going, and this place will NOT be on the list. Not sure how they got all their good reviews, but unless you are calling with no time rush, they're worthless.

Description of Work
New condensate pump for A/C handler. Pump had given out, so A/C would not turn on.