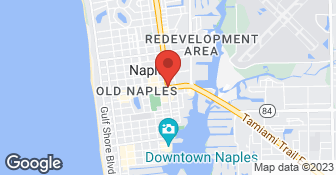 Panther amphibian has been providing service to the Naples, Bonita springs, and Marco island area of south west Florida since 1986. We are a small business with 10 employees offering honest traditional pool services and much, much, more. Get the details on a free month of pool service with new pool service accounts, and learn more about the integrity behind panther amphibian....

Contacted them prior to coming back to Florida to ensure everything was functioning fine with our pool. Arrived 3 days later and had to call them about a non-functioning pool pump but they never came to repair or respond. When the maintenance guy came two weeks later I asked him how the previous week's maintenance went. He responded fine. I questioned him on what he did and when he lied I told him that I was there and the pool pump and motor had been removed before he had gotten there. I fired the company and they promised to refund but 2 months later..nothing

Description of Work
Often they never showed up for their weekly maintenance.

Excellent. I have had 2 other pool companies before Panther and was never completely satisfied. I switched to Panther after receiving unbiased advice via Angie's messages about a new pool heater. Even though I got the heater from another vendor, I was so impressed by Steve's prompt professional advice and quotes that I decided to hire him for regular pool maintenance. As you can see, he and Jon have already made 2 more repairs for us. They even spotted a leak in the pool heater and informed me that it was still under warranty from the manufacturer. That repair was done for free!

I had heard a lot of great things about them. and have now set up a monthly maintenance package for my pool. I recommend them to you for your pool service needs.

We had an emergency with our pool pump and Steve came out right away to give us an estimate. Honest and high quality, prior estimate was five times the amount and involved total pump replacement! We were so thrilled with this company's honest estimate and quality communication, we have switched to them for routine pool service. Bravo!

Thank you for the great review, we are looking forward to working with you!
5.0

Rapid response to message on Angie's. Steve sent detailed proposal and brochure of 2 different units based on the size of our pool/spa. We didn't use Panther Amphibian because we got a lower price from another highly rated Angie's provider. However, I was so impressed with Panther's professional responsiveness and courtesy, that I would consider using them for routine pool maintenance in the future.

Many thanks for taking the time to post the kind review. We hope to hear from you in the future.
1.0

Called on July 3 to request service for what seemed to be a fairly easy job. Repair small pipe leak near pool filter and replace the pool light. Told that Randy would be out on Tuesday, July 7 to check it out and call me. Heard nothing from Randy. I was out of town but called the next day to discover Randy never showed and didn't have the correct number to call me. Odd that the dispatcher, who had the correct number, never called either. When I spoke with the dispatcher on Wednesday, she said he was 15 minutes away and would be there. Finally got a quote which I approved and was told it would be fixed. When I arrived home on Friday, the repair still was not done. Called the dispatcher who was surprised the approved work had not been completed and she called Randy to follow up. She then got,back on the phone with me and said he would be here in a half hour. At that point I said "No" and to tell the owner, Steve, that Randy just lost this business for him. I am a reasonable person and would certainly be flexible if there was a change in the scheduling as long as it was communicated to me. This was flat out unprofessional on several counts. As I am composing this review, Steve, the owner called me to apologize. I give him credit for that and feel badly about slamming the company. However, I have reported good as well as bad experiences and feel I owe it to the Angies List members. That's what makes this whole thing work. In fairness, Panther Amphibian has had a very high percentage of good reviews.

We somehow had an incorrect phone number on file for this client, which must have been our error. Our office manager did finally speak with the customer and believed the phone number and scheduling issue(s) had been resolved. Our repair technician (as mentioned Randy) was on schedule as finally arranged, Randy has the job scheduled for the afternoon. My understanding is he had not communicated and/or confirmed this in the a.m. with the customer as he should have. There is no question this was a scheduling and communication snafu, to say the least, by Panther Amphibian. Please note that no work was ever performed for this client. On behalf of Panther Amphibian I would like to once again extend my/our sincere apologies. It's not often we have an issue like this. These things unfortunately do happen no matter how dedicated we may be. We will always do what we can to try and make things right. Kind Regards, Steve Lewis
5.0

Replaced my pool heater. This company was great to deal with - from the proposal to the install. They were professional, efficient, punctual. I would definitely use again. I thought that replacing the pool heater would be a big ordeal, but Panther Amphibian made the whole process easy.

Thank you so much for your kind words. It takes great customers like you too. -:)
1.0

Stop lying to people and do business the old fashion way, HONEST.

Description of Work
I checked out this pool service provider in Naples based on Angie’s list and hired them to do weekly service for my pool. The came in and did the service last week and all was good. I called them to see why they did not show up this week, they called back and said that the pool guy was here. 1- my wife and I were both home all day long. 2- I have security cameras all over the place, which I told them over the phone, just tell me when they showed up and I will send you footage that no one showed up. If this is how they treat people, and lie about showing up and charge you for it, I think I am safe to say that this is a RIP OFF COMPANY. I canceled my service and will never use them again for anything. Do not be taken by a company like this. I am waiting to see my credit card charges, If they charge me for a whole month of service where they just came in one time, I will add to this review and if allowed I will post the bill for everyone to see what a scam this company is. Waiting to see….

This gentleman hired our services over the phone, It is my understanding his pool was serviced twice by our company. Our sincere and so far up to date very Honest technician, states the same. This customer was unwilling to have ANY discussion whatsoever after we confirmed with our GPS records. His credit card was refunded IN FULL IMMEDIATELY following our attempted conversation of the situation. It is my sincere belief in an effort to avoid saying he is an unreasonable individual, that there must have been a mix-up / misinterpretation, or misunderstanding of some sort. We are very disappointed with this result.
5.0

They show up every Friday. They vacuum when needed, check filter, etc replaced a gauge, pool is spotless. Steve is very professional and does what he says he is going to do. Jose is great as well. AWESOME CUSTOMER SERVICE!

Thank you for writing such a nice review. We really appreciate it and are very pleased to have you a customer!
5.0

I highly recommend Panther Amphibian for your pool/spa needs. The owner Steve came to our house with two proposals and took his time to in explaining what kind of pool heater we would need. Steve knows his business and has a no pressure approach in his presentation. My wife and I agreed on a pool heater that Steve recommended. The next day the installer showed up and after an hour our pool was heating up again.

Description of Work
Replaced pool/spa heater with a new unit.

Thank you so much for the business and review!

Welcome to American Leak Detection, the "Original Leak Specialists." Since 1974, we have detected nearly 5 million leaks, saving homes and business owners billions of dollars in costly repairs. Accurate leak detection requires a combination of two things: Specially trained experts: Our technicians have completed the industry's most extensive training program and are highly skilled to accurately locate the most difficult leaks, without destruction. Quality equipment: American Leak Detection has taken its job a step further by implementing its own proprietary methods and technology to ensure the most non-invasive leak detection possible. Five reason you can depend on American Leak Detection: Non-Invasive: Our slogan says it best "Leak Detection Without Destruction." We are the world leader in the accurate, non-destructive detection of all types of leaks including hidden water and sewer leaks. Experience and Resources: We're the Original Leak Specialists with more than 40 years of experience, state-of-the-art equipment, and ongoing research and development for new leak detection technology and techniques. Save Money: Our non-invasive methods assure a timely and economical outcome and ensure that damage to property is eliminated or reduced. Upfront Pricing: We find our customers prefer an accurate price based on us accurately inspecting the situation and making recommendations. Many service companies quote low prices over the phone because they know people may be shopping for the lowest price. Therefore, many phone quotes are inaccurate and change after a technician sees the job. We feel this method is Not Fair to customers. After speaking with our office, you will know up-front what your cost will be to detect the leak. Licensed-Insured: Have peace of mind knowing that we have been thoroughly checked and are licensed and insured.  …

How is Panther Amphibian overall rated?

Panther Amphibian is currently rated 4.8 overall out of 5.

What days are Panther Amphibian open?

No, Panther Amphibian does not offer a senior discount.

Are warranties offered by Panther Amphibian?

No, Panther Amphibian does not offer warranties.

What services does Panther Amphibian offer?

Are there any services Panther Amphibian does not offer?